"The importance for me is the message the film gives to the Israeli public. The message is that occupation is bad for the future of Israeli society from all aspects - humanistic, economic, moral, etc. I can assure you that all six former heads and some 95% of my colleagues and workers from the Shin Bet from over three decades all agree with the overall conclusions of the film." -- Carmi Gillon Shin Bet Director 1994 - 1996 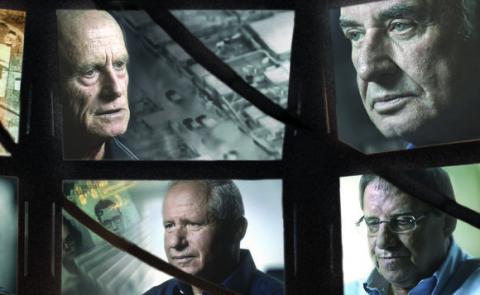 A still from the documentary "The Gatekeepers.", Sony Pictures Classics

Israel's Shin Bet - think of it as a combination of the CIA and the FBI - prides itself on secrecy. So when documentary filmmaker Dror Moreh approached one of its past leaders some three years ago to discuss the agency's role in the Israeli-Palestinian conflict, he expected silence.

But as in so much of life, timing is everything. When Moreh contacted Ami Ayalon, who headed the domestic counterterrorism agency from 1996-2000, the left-leaning Ayalon was ready to talk - and to help Moreh secure interviews with the other five living former Shin Bet leaders.

Eventually, Moreh recorded more than 70 hours of interviews with the six men who served as heads of Shin Bet from 1980 to 2011. They not only walked the filmmaker through Israel's intelligence operations but also opened their hearts to him.

"I knew I had dynamite in my hands," Moreh said of completing the interviews.

The resulting film, "The Gatekeepers," delivers an extraordinarily frank assessment of both the agency's tactics (there's no morality in war) and a harsh appraisal of Israel's occupation of the West Bank and Gaza Strip (nothing short of a two-state solution will fix the problem).

Toward the film's end, one Shin Bet leader even concludes that Israel's occupation of territories claimed by Palestinians is not that different from what the Germans did during World War II.

One of five feature-length documentaries vying for an Oscar and opening in limited theatrical release this weekend, "The Gatekeepers" is far from a talking-heads assembly. Instead, Moreh injects the film with kinetic cinematography, including satellite imagery, stylized photo-driven reenactments and archival footage that takes "The Gatekeepers" into a nearly narrative direction.

"Film is not just about content but what you show cinematically, how you affect the audience with what you show," Moreh said. "I knew my biggest task was to make sure the look of the movie was as good as what was said in the film."

But it is what the Shin Bet leaders admit, rather than the way in which Moreh films them, that gives "The Gatekeepers" its true impact.

While the six leaders are dissimilar politically, personally and professionally - "I don't think they like each other so much," the director said - they ultimately come to say slightly different versions of the very same thing: Even if Israel is winning most of the battles it is losing the war, and the moral price of the occupation is incalculable and unacceptable.

Shin Bet was born in the wake of the Six Day War of 1967, when 1 million Palestinians were placed under Israeli military rule essentially overnight. When terrorism started, as Shalom almost fondly recalls, "It was lucky for us. We had work."

That work included espionage, torture and an array of controversial decisions. In the rearview mirror, it all looks worse. "When you retire, you become a bit of a leftist," Yaakov Peri, Shin Bet's leader from 1988 to 1995, says in the film.

The film focuses closely on a 1984 event known as the Bus 300 incident in which two Palestinians who had hijacked a bus were caught, beaten and executed before being tried, with Shalom's blessing. And it revisits one of Shin Bet's biggest intelligence failures, when Prime Minister Yitzhak Rabin, perhaps the last best hope for lasting peace between Israelis and Palestinians, was killed in 1995 by a radical, right-wing Orthodox Jew.

One of the more straight-speaking Shin Bet leaders, Carmi Gillon, who ran the organization from 1994 to '96 and quit after Rabin's assassination, said he was initially reluctant to answer some of Moreh's questions, particularly about the targeted killing of Hamas bomb maker Yahya Ayyash by Shin Bet in 1996. But he changed his mind after seeing how well-informed the filmmaker was.

"I never spoke about the details" before, Gillon said in an email interview. "After I understood how much information Dror already had, I decided to cooperate."

A cinematographer by training, the 51-year-old Moreh has directed several documentaries previously. The most prominent was his 2008 film "Sharon," a profile of former Israeli Prime Minister Ariel Sharon.

Moreh said he was compelled to make "The Gatekeepers" by Errol Morris' documentary "The Fog of War: Eleven Lessons from the Life of Robert S. McNamara." That film, about the U.S. secretary of defense from 1961 to '68 who oversaw America's plunge into Vietnam, won the Oscar in 2004. "When I saw the movie for the first time, I was amazed, first and foremost, by the access - that Morris found people who could testify as to what really happened."

As it turned out, Ayalon was a fan of "The Fog of War" too, which helped open the Shin Bet doors.

Moreh said he also was motivated by what he was taught (and doubted) growing up in Israel: that the only impediment to peace were Arabs, who only wanted to "annihilate the state of Israel" and that "we are fighting because there is no choice." Moreh had been frustrated that "so many missed opportunities" for peace had slipped away, and believed that no one other than the Shin Bet leaders could explain what was really happening on the ground.

"I don't know if it's started a dialogue yet, but I know the audience is listening," Moreh said of the early reaction to "The Gatekeepers," adding that he is presently adding Arabic subtitles to the film so that it can be shown to everyone who has a stake in the crisis. He is also planning on expanding the movie into a five-hour television series in Israel.

Moreh says the film has been performing strongly at the Israeli box office; it's been showing in about 15 cinemas around the country. "It's done as well as some Israeli narrative films," the director said. But he is eager for it to be seen more broadly.

"The importance for me is the message the film gives to the Israeli public. The message is that occupation is bad for the future of Israeli society from all aspects - humanistic, economic, moral, etc.I can assure you that all six former heads and some 95% of my colleagues and workers from the Shin Bet from over three decades all agree with the overall conclusions of the film."

Who Will Watch "The Gatekeepers"?
by Raphael Magarik
The Daily Beast
January 10, 2013
http://www.thedailybeast.com/articles/2013/01/10/the-mistakes-of-the-gatekeepers.html

To move between "The Gatekeepers," a new Israeli documentary featuring interviews with six former heads of Israeli's internal security force, and the wave of campaign ads flooding the country is, let us say, disconcerting. On the one hand, you have former Shin Bet (Israel's FBI, more or less) director Avi Dichter narrating the moral dilemmas of the Second Intifada. With buses regularly exploding in Tel Aviv, do you, for instance, flatten a residential house containing Hamas leaders, but also maybe civilians? On the other hand, back in the present, the ultra-Orthodox party Shas has just pulled a campaign ad which featured a wedding, anti-Russian racism, and an anti-religious fax machine. The country's recent rightward shift is both disturbing and somehow venal. So can "The Gatekeepers," with its sober yet sweeping history of post-1967 Israel, bring the occupation back to the national conversation?

It is a remarkable effort. Director Dror Moreh secured access to six of the last seven Shin Bet directors. Their words, though illustrated with archival footage and punctuated by Moreh's occasional question, largely stand on their own. Starting with post-'67 jubilance, they narrate an insider history of the occupation. You watch the early American settlers, whose enormous sideburns, knock-off AK-47s, and grandma glasses look quaintly retro, morph into the hardened ideologues who plotted to dynamite the Dome of the Rock. Most chillingly, you hear the Shin Bet's disappointment at the plotters' light sentences and quick return to influential government posts.

There are dozens of vignettes like this. They talk, it seems, about everything: building an intensive (and brutal) security network in the territories, arguments whether to continue torturing Palestinian prisoners after the Oslo accords (Rabin said "yes"), failing to protect Yitzchak Rabin from assassination. A plump, grandfatherly and suspendered Avraham Shalom, who presided over the Shin Bet in the eighties, hesitates but finally discusses his role in the infamous "Kav 300 affair," in which his agents killed two Arab terrorists in their custody. He's probably lying a little, but that's kind of the point. "The Gatekeepers" is clearly inspired by Errol Morris's non-confrontational handling of Vietnam planner Robert McNamara in "The Fog of War" (and Moreh says as much in interviews). But "The Gatekeepers" is actually stronger than Morris's original, partially because the Israeli history treated is more recent, but more because the six combined interviews give a profile of an institution, not just an individual.

It's a depressing profile. Several of the directors express skepticism that terror can be completely suppressed without a Palestinian state. Avraham Shalom says that Shin Bet's arrests, monitoring, and anti-terrorism network developed in the Territories before Palestinian terrorism did (thinking of the hijackings of the 1970s, it seems likely he's talking about West-Bank-based terror), and that until things heated up, he was not sure what to do with the operation he had built. Combined with images of mass arrests and blindfolded prisoners, this raises the question where security ends and controlling an occupied people begins. When Israel started dealing with terror, Shalom says, "we forget about the whole Palestinian [state] question."

Other arguments are more familiar. Yuval Diskin-who's been a vocal critic of Netanyahu-points out that to Palestinians, he and the security forces he controlled were terrorists. Ami Ayalon wonders if Israeli reprisals are about security or vengeance, and he notes that Israeli settlement doubled between Oslo and Camp David. And so on. The movie touches on nearly all the classic arguments of what used to be the mainstream left in Israel. This is unsurprising, given the links between the former Shin Bet chiefs and opposition parties like Labor and Kadima. Indeed, especially at the end of the film, when the interviewees wade into contemporary debate (several, for instance, support negotiations with Hamas), "The Gatekeepers" feels like the self-conscious intervention in Israeli elections it is.

But the film rises above the occasional stump speeches. Take one of its opening anecdotes. During the first census of the territories, Israeli soldiers, going door-to-door after just a crash course in Arabic, disastrously confused the Arabic for "count" and "castrate." Like the movie's blow-by-blow telling of a targeted assassination via booby-trapped cell phone, this story has as its core the scandalous humanity of Israeli occupiers.

The masters of war, it turns out, are as fallible as the rest of us. They shape history, to be sure, but they are also plainly subject to politics (it's amazing how many were forced to resign). These are canny, cunning spy masters, and they are thoughtful and reflective. But there's no long-term strategy here, just the murky and temporary logic of security. And whether or not voters recognize it later this month, as long as the forceful domination of the Palestinian territories persists, so will the horrible, tragic mistakes.