What Happened to Jobs and Justice?

WILLIAM P. JONES http://www.nytimes.com/2013/08/28/opinion/what-happened-to-jobs-and-justice.html?ref=global&_r=0
The August 28, 1963, March on Washington helped build support for President Kennedy's civil rights bill.The protest was largely responsible for the addition of Title VII, which prohibited employers and unions from discriminating on the basis of race, religion, national origin and sex. It also helped lead to the passage of civil rights legislation under President Johnson. As some of these provisions have been weakened what will be needed to move forward?

How Black Unionists Organized the 1963 March for Jobs and Freedom 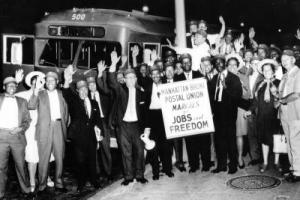 A fascinating new book from historian William P. Jones puts the 1963 action in its organizing context. Every U.S. school child learns the opening words of Dr. King's "I Have a Dream" speech, but how many are taught that the march was the brainchild of the nation's leading black labor activists--and called not only for an end to prejudice, but also for a federal jobs program, equality at work, and a boost to the minimum wage?
April 4, 2013 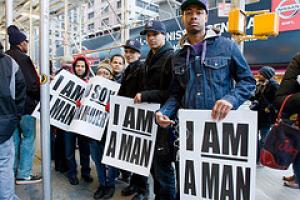 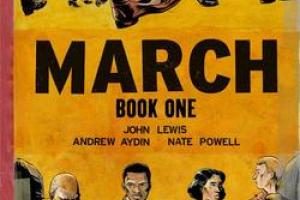