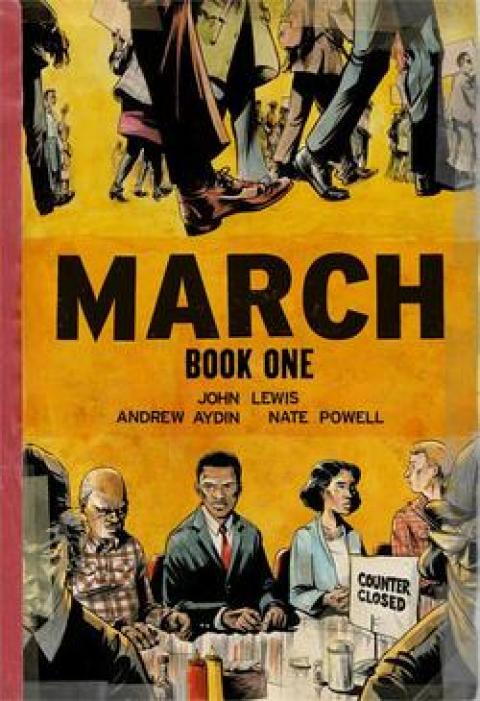 The first book in Rep. Lewis' graphic-novel trilogy will be out in August.,

Congressman John Lewis of Georgia made history as a leader in the civil rights movement that brought down Jim Crow, and now he's telling his inspiring life story in graphic novel form.

"March" is a firsthand account of Lewis' lifelong struggle for civil and human rights, documenting his beginnings as the son of Alabama sharecroppers to becoming one of the "Big Six" leaders of the civil rights movement and a recipient of the Presidential Medal of Freedom.

The first volume, "March (Book One)," will be available in stores on Aug. 13, two weeks before the 50th anniversary of the 1963 March on Washington, which Lewis helped plan as chair of the Student Nonviolent Coordinating Committee (SNCC) and where at age 23 he was the youngest speaker.

"Rooted in Lewis' personal story, it also reflect on the highs and lows of the broader civil rights movement," according to an announcement about the book from its publisher, Atlanta-based Top Shelf Productions. Collaborating with Lewis on the trilogy are Andrew Aydin, an aide to the congressman, and artist Nate Powell, an Arkansas native and award-winning graphic novelist.

The trilogy has a rich life story to draw from: Following the March on Washington, Lewis coordinated SNCC's voter registration drives during the Mississippi Freedom Summer and helped lead the 1965 "Bloody Sunday" voting rights march from Selma to Montgomery, Ala. where a state trooper fractured his skull with a night stick. After leaving SNCC in 1966, Lewis worked with community organizations and helped found the nonprofit Institute for Southern Studies, publisher of Facing South.

Lewis eventually went into electoral politics, winning a seat on the Atlanta City Council in 1981 and elected to represent Georgia's Fifth Congressional District in 1986. He's been re-elected to Congress 13 times, winning less than 70 percent of the vote only once. A Democrat, Lewis is one of the most liberal members of Congress to ever come out of the Deep South, supporting gay rights, national health insurance, and strong social safety net. A committed practitioner of nonviolence, Lewis was an outspoken critic of the Iraq war and called for impeaching President Bush over warrantless wiretaps.

"March" is not Lewis' first foray into the printed word: His 1999 work "Walking with the Wind: A Memoir of the Movement" won numerous honors, and his most recent book, "Across That Bridge: Life Lessons and a Vision for Change" won the NAACP Image Award.

For more information about or to pre-order "March," click here.