How to Cut Megabanks Down to Size

Huge banks must be restructured and their access to the safety net scaled back, Mr. Fisher said, because neither regulators nor market participants have proved effective in monitoring risks at these institutions. 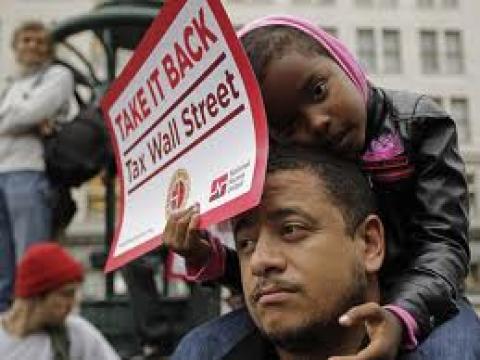 Occupy the Banks!, Photo By Ben Margot
It is a prevailing myth in Washington: big bailouts are over for good. Never again, the line goes, could giant financial institutions imperil the nation's economy.
This is nonsense, of course. Whatever regulators and lawmakers say, the Dodd-Frank financial overhaul lacks any guarantee that taxpayers won't have to come to the rescue again.
So it was refreshing to hear a member of the Federal Reserve Board debunk the bailouts-are-gone theory last week.
The official was Richard W. Fisher, the president of the Federal Reserve Bank of Dallas and a longstanding truth-teller about too-big-to-fail banks. On Wednesday, in a speech in Washington, Mr. Fisher laid out a compelling proposal for shrinking financial giants in order to protect taxpayers. He suggested that megabanks be chopped into pieces, so that no one of them could endanger the financial system if it ran into trouble.

That may sound like a return to the Glass-Steagall Act, the Depression-era law that separated investment banking and commercial banking until it was dismantled in 1999. But Mr. Fisher's plan is more sophisticated than Glass-Steagall, in that it recognizes how complex big financial institutions have become. Glass-Steagall concerned only old-school banking businesses, like making loans, and Wall Street businesses, like trading stocks. Today's financial behemoths are in so many different businesses that a top-to-bottom restructuring is required.

Why? Mr. Fisher argued that megabanks not only threaten taxpayers with bailouts, but that their continuing failure to lend is also thwarting the Fed's efforts to jump-start the economy by keeping interest rates low. "I submit that these institutions, as a result of their privileged status, exact an unfair tax upon the American people," he told his audience. "Moreover, they interfere with the transmission of monetary policy and inhibit the advancement of our nation's economic prosperity."
Smaller institutions, by contrast, have continued to lend in the post-crisis years, especially to the kinds of modest-size businesses that create so many jobs across the country. According to figures compiled by Mr. Fisher's colleagues at the Dallas Fed, community banks - defined as those with no more than $10 billion in assets - hold less than one-fifth of the nation's banking assets. Nevertheless, they hold more than half of the industry's small-business loans.
Huge banks must be restructured and their access to the safety net scaled back, Mr. Fisher said, because neither regulators nor market participants have proved effective in monitoring risks at these institutions.
The manic years before the credit crisis proved that regulators can't police financial institutions appropriately. And while market discipline has worked to keep smaller institutions on the straight and narrow, it has been ineffective with megabanks, Mr. Fisher said. He noted, for example, that community banks typically have a few large shareholders scrutinizing the risks in their operations. But too-big-to-fail institutions, with millions of disparate shareholders, don't benefit from this kind of concentrated policing mechanism.
Big banks' creditors - like bond holders - don't impose discipline, either. They know they will be protected by a taxpayer rescue should a large institution teeter.
Fairness is at the heart of Mr. Fisher's argument. Large institutions, he said, are "financial firms whose owners, managers and customers believe themselves to be exempt from the processes of bankruptcy and creative destruction." In other words, small institutions must submit to the rigors of the free market. Those too big to fail do not.
There are roughly 5,600 commercial banking institutions in the country, Mr. Fisher noted. Some 5,500 of them are community banks. While these organizations account for 98.6 percent of all banks, they hold only 12 percent of total industry assets. They are routinely allowed to fail if they get into trouble. Few of them did during the crisis.
Contrast these figures with those of the nation's 12 largest banks, whose assets range from $250 billion to $2.3 trillion. They account for 0.2 percent of all banks but hold 69 percent of industry assets. These are the banks that enjoy all the perquisites of the federal safety net: significantly lower borrowing costs and a taxpayer backstop, for example.
Understanding that it will be a tough battle to break up the megabanks, Mr. Fisher suggests that in the meantime, only commercial banking operations receive protection from the federal safety net in the form of federal deposit insurance. An institution's other activities - securities trading, insurance operations and real estate, for example - should fall outside any backstop. Furthermore, he recommends that these banks require customers and trading partners to sign an agreement stating that they understand the business they are conducting is not covered by any federal protection or guarantees. That would begin to reduce the perception that all of these institutions' counterparties would be protected in a disaster.
"Financial stability rests on a level playing field that rewards sound judgment and integrity and penalizes excessive risk and complexity financed by taxpayer dollars," Mr. Fisher said in his speech. "Government must retain its role as the financial system's watchdog, but it should render no institution immune to market discipline."
IN an interview after the speech, Mr. Fisher said he believed his plan could appeal to both liberals and conservatives. "It's politically palatable on both sides of the aisle," he said. "This is one thing that both Republicans and Democrats can agree on."
Or, as he said more pointedly in his speech: "If the administration and the Congress could agree as recently as two weeks ago on legislation that affects 1 percent of taxpayers, surely it can process a solution that affects 0.2 percent of the nation's banks and is less complex and far more effective than Dodd-Frank."
The response to Mr. Fisher's proposal has been resoundingly positive, he said. Immediately after the speech was posted Wednesday evening on the Dallas Fed's Web site, heavy traffic caused the site to shut down.
"I do think that this is something that can actually bring people on Capitol Hill together," he said.
Wouldn't that be nice?