A new study in mice suggests that Leprosy employs a bit of biological trickery to do its damage: It reprograms certain nerve cells to become like stem cells and uses them to infiltrate the body's muscle and nervous systems. 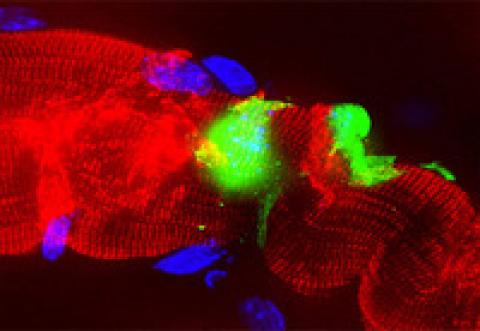 Leprosy has plagued humans for thousands of years, but that doesn't mean it has revealed all of its secrets. A new study in mice suggests the disfiguring disease employs a bit of biological trickery to do its damage: It reprograms certain nerve cells to become like stem cells and uses them to infiltrate the body's muscle and nervous systems. This is the first time that scientists have seen bacteria reprogram cells in this way, and experts say the find could lead to the development of new treatments for leprosy and other neurodegenerative diseases.

More than 200,000 people worldwide are diagnosed with leprosy (also known as Hansen's disease) each year. Despite its ancient origins and almost mythic status, however, leprosy remains mysterious. Researchers know that it's caused by the bacterium Mycobacterium leprae, and that it leaves sufferers with deforming lesions and a debilitating loss of sensation in their hands and feet. But they don't know how the infection spreads throughout the body or why it damages nerves so extensively. In part, that's because it's hard to investigate: the bacterium that causes leprosy can't be grown in a lab, so it can only be studied in infected humans, armadillos, and genetically engineered mice.

To answer some of those lingering questions, biologist Anura Rambukkana of the University of Edinburgh in the United Kingdom and his colleagues seized on another known detail of the disease: its predilection for infecting Schwann cells, specialized cells that sheathe the nerves and help transmit nervous system signals. The researchers isolated Schwann cells from mice and infected them with M. leprae—and were soon surprised by what they saw.

The bacteria transformed the cells, turning off genes that were expressed in mature Schwann cells and turning on genes associated with earlier stages of cell development. The cells became immature and, like certain kinds of stem cells found in bone marrow and other tissues, could now turn into bone and muscle cells. "We thought, 'Oh, my God, this is a vehicle for going anywhere in the body,' " Rambukkana recalls.

When the team reintroduced the altered cells into the mice, some of the cells migrated to muscle tissues and spread the bacteria wherever they went. The results suggest that M. leprae hijacks Schwann cells, destroying their ability to insulate and support the nervous system, so it can use them to infiltrate other tissues in the body, the team reports online today in Cell.

Rambukkana hopes that future studies will shed more light on how the leprosy bacterium transforms Schwann cells. Understanding the process could help doctors diagnose leprosy at earlier stages and possibly stop it in its tracks, he says. "It can also help us find new ways to generate stem cells for therapeutic approaches, so we can treat other neurodegenerative diseases," such as multiple sclerosis.

There's one caveat, says developmental neurobiologist Michael Wegner of the University of Erlangen-Nuremberg in Germany who was not involved in the study. The study doesn't prove that M. leprae co-opts human Schwann cells in the same way, he notes. But it does offer a plausible mechanism in "a fascinating study that uses state-of-the-art methodology."

Dermatologist and leprosy researcher Robert Modlin of the David Geffen School of Medicine at the University of California, Los Angeles, agrees. "I was amazed—this is a really creative, out-of-the-box study," Modlin says. "It raises mind-provoking questions about how it could relate to humans. It has real potential."