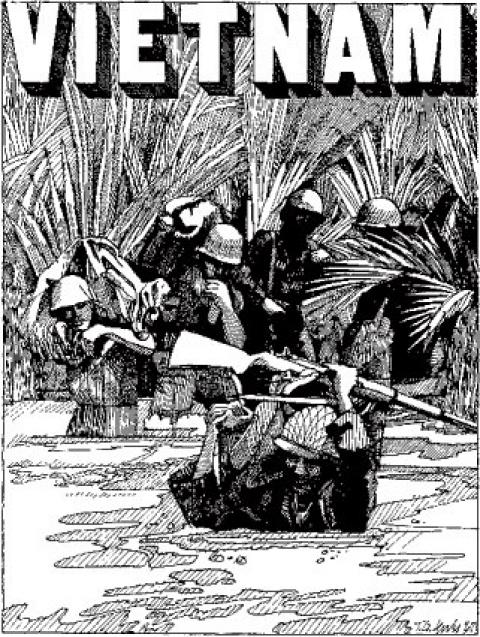 A detailed history and analysis of the Vietnam War in an easy to read format. Vietnam: An Anti-War Comic Book by Julain Bond, illustrated by T.G. Lewis.,T.G. Lewis - (c) Julian Bond (1967). Made available online by The Sixties Project.

The Paris Peace Accords were signed on January 27, 1973, making possible a re-united Vietnam. For much of the American public, the Vietnam War was a bitterly divisive issue to put behind them. With no good ending, why dwell on or learn from or lose sleep over a failed war, unless you had lost a child or were a veteran haunted by its violence.

The American war in Vietnam was a doomed modern military invasion against a popular, rural-based insurgency for independence. In his memoirs President Eisenhower acknowledged that 80 percent of the Vietnamese would likely have voted for North Vietnam's Ho Chi Minh, if the general countrywide election called for by the 1954 Geneva Conference had been held. But elections were stymied by the United States, which backed the corrupt South Vietnamese dictator Ngo Dinh Diem.

Why were we there? The political zeitgeist that spawned the Vietnam War was the threat of Communist China at Vietnam's northern border and fear of the "domino effect," that is, the progressive fall of one southeast Asian country after another in wars of independence to Communism. But why destroy Vietnam if Red China is our enemy, retorted Curtis Le May, air force commander of the hellish firebombing of Japanese cities in World War II, to this perfidious logic. The overarching policy of containing Communism fused with what war historian George Herring describes as "the arrogant presumption that the United States knew best what was right for Vietnam" corrupted and militarized five administrations' foreign policy-from Truman to Nixon-in southeast Asia.

During the ten years (1961-1971) of aerial chemical warfare in Vietnam, U.S. planes sprayed more than twenty million gallons of herbicide defoliants, in an operation code-named Ranch Hand, to destroy enemy plant cover and crops and to clear vegetation around U.S. bases. Agent Orange, the dioxin-contaminated and exceedingly toxic herbicide constituted about 61 percent of the total herbicides sprayed in the war.

By the end of the war, nearly five million Vietnamese had been exposed to Agent Orange, an exposure which has resulted in "400,000 deaths and disabilities and a half million children born with birth defects," according to the 2008-2009 President's Cancer Panel Report. Agent Orange was so extensively sprayed that all of the two million Americans who served in Vietnam are presumed exposed. The Veterans Administration now associates a multitude of cancers, heart disease, diabetes type 2, neuropathy, Parkinson's disease, and birth defects, including spina bifida, suffered by veterans with Agent Orange exposure and their children.

However, it took veteran advocates, their lawyers and concerned scientists decades of confronting inept and corrupt government health studies to achieve this governmental acknowledgment of the human health harm of Agent Orange. Vietnam veterans continue to eke out needed health services from a reluctant government, which still contends that it used the deadly chemicals to protect the soldiers and refuses to accept any responsibility for multi-generations of Agent Orange victims in Vietnam.

The war persists in the dioxin residues accumulated in the Vietnamese environment and food chain and in the pollution of millions of human bodies, by now transmitted to three generations of Vietnamese. Despite compelling science on the harm of dioxin exposure, the Vietnamese victims have received nothing by way of compensation, cleanup or services from the U.S. government or Agent Orange manufacturers. That is, until 2007 when the U.S. Congress appropriated $9 million for clean up of contaminated sites and health-related activities.  In 2011, US AID joined the Vietnamese government in the first phase of a $32 million dioxin-contaminated soil removal program at a former U.S. air base in Da Nang. "'It's a big step,'" said Ngo Quang Xuan, a former Vietnamese ambassador to the United Nations. "'But in the eyes of those who suffered the consequences, it's not enough.'"

Not nearly enough, given more than three million victims of chemical poisoning and more than two dozen contaminated sites in need of remediation. (Canadian study - look up book review to fill out)

HR 2634-The Victims of Agent Orange Relief Act aims to give Vietnamese and U.S. veterans' children and grandchildren who are victims of our chemical war in Vietnam the medical, rehabilitative and social compensation they need and also to remediate Vietnam's dioxin-contaminated environment. The bill, sponsored by Rep. Bob Filner (D-CA), has 14 co-sponsors in Congress. Send a postcard found on the Vietnam Agent Orange Relief and Responsibility Campaign website to the U.S. Congress asking it to pass HR 2634. Track the bill's progress on the OpenCongress website.

[H Patricia Hynes is retired Professor of Environmental Health from Boston University and she directs the Traprock Center for Peace and Justice in western Massachusetts.]