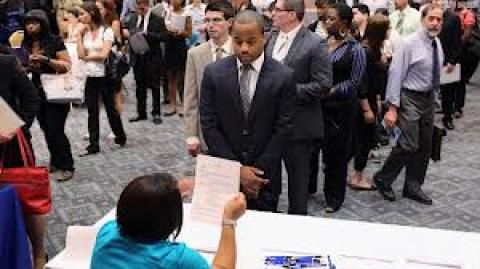 So much for the hopeful news. African American unemployment actually increased last month and - as has become usual - the rate for young black people remained at an alarming level.

While the overall jobless rate stayed at 7.8 percent, the percentage of African Americans looking for work and finding none went from 13.2 percent in November to 14 percent in December, and black teen joblessness rate rose 39.9 percent to 40.5 percent by the end of the year. It reached 44.9 percent among young black men. The rate for Latinos remains higher than the national average at 9.6 percent, down from 9.9 percent in November.

This Labor Department's new report comes with the usual caveat: these figures do not include workers who have given up looking.

Economic Policy Institute (EPI) economist, Heidi Shierholz, called the December job statistics a "status quo." "The problem, of course, is that a status quo report in today's labor market represents an ongoing jobs crisis," she wrote. "The jobs deficit - the number of jobs lost since the recession officially began five years ago plus the number of jobs we should have added just to keep up with the normal growth in the potential labor force - remains nearly 9 million."

A lot of the black jobless are part of the 1.5 million "99ers" (people without work for 99 weeks or more). That horrendous number is the lowest recorded in two years; however, there is ample reason to suspect the figures don't mean those who have been jobless for that long a time actually found work. "That decline is likely not due to an improving labor market, because it just hasn't improved much over the last two years," Shierholz told the Huffington Post. "A lot of the decline in the unemployment rate we've seen is just due to people dropping out of the labor market." In any case, that's 4.8 million people who, for over six months, have been unable to earn a living and care for themselves and their families.

When what is referred to as hidden unemployment is taken into consideration the picture that emerges is dire indeed. "Thus, the black unemployment rate of 14.3 percent translates to an overall black unemployment rate of 26.4 percent," wrote economist and NNPA columnist, Julianne Malveaux (BC Editorial Board member), in November. "That means more than one in four African Americans is unemployed. In some urban areas, as many as half of the African-American male population does not work."

In an interview with The Root, then-Chair of the Congressional Black Caucus, Emanuel Cleaver (D- Mo.), had this to say about the rate of unemployment among black Americans during the first black president's first term: "Look, as the chair of the Black Caucus, I've got to tell you, we are always hesitant to criticize the president. With 14 percent [black] unemployment, if we had a white president, we'd be marching around the White House."

"African-American activists must remind our president of this data," says Malveaux. "They must suggest that there is a coordinated and comprehensive response to the disproportionate exclusion of African Americans in our economy."

"The unemployment rate data is a monthly reminder of the State of Black America. If we are unsatisfied with the facts, what will we do to change them?" asks Malveaux.

"The One Economic Problem Nobody Seems to Give a Damn About," is the title of a January 14 commentary by progressive political blogger, Heather Parton, aka Digby. "It remains one of the strangest and saddest aspects of our current economic debates that nobody seems to care all that much about our still painfully high unemployment," she wrote. "And it's probably a lot higher than we know."

She's right. Listening to most of the media analysis last fall you would have thought the November election results and the fate of the Obama administration hinged on the unemployment statistics. Now that the election is over, it seems mum's the word.

So, as President Barack Obama begins has second term in office and a new Congress takes its seat, this would seem a good time to ask a few questions. Is this a really serious crisis or what? If it is, what can and is being done about it? Not just for African Americans but for all the 12 million unemployed workers in the U.S. who, according to the Bureau of Labor Statistics, have been out of work for an average of 38 weeks.

It didn't have to be this way and pursuing a radically different approach than the one pursued over the past four years is the challenge before the second Obama Administration.

"Instead of pouring money into the banks, we could have tried rebuilding the economy from the bottom up," wrote economist, Joseph Stiglitz, in last Sunday's New York Times. "We could have enabled homeowners who were `underwater' - those who owe more money on their homes than the homes are worth - to get a fresh start, by writing down principal, in exchange for giving banks a share of the gains if and when home prices recovered."

"We could have recognized that when young people are jobless, their skills atrophy," continued Stiglitz. "We could have made sure that every young person was either in school, in a training program or on a job. Instead, we let youth unemployment rise to twice the national average. The children of the rich can stay in college or attend graduate school, without accumulating enormous debt, or take unpaid internships to beef up their résumés. Not so for those in the middle and bottom. We are sowing the seeds of ever more inequality in the coming years."

Stiglitz allows that the Administration is only partly to blame for the present state of affairs, adding, "President George W. Bush's steep tax cuts in 2001 and 2003 and his multitrillion-dollar wars in Iraq and Afghanistan emptied the piggy bank while exacerbating the great divide. His party's newfound commitment to fiscal discipline - in the form of insisting on low taxes for the rich while slashing services for the poor - is the height of hypocrisy."

On December 17, a group of African American leaders and activists met in Washington to draw up a "black agenda" to be presented to President Obama on the eve of his second term. The tenaciously high jobless rate in the black community figured prominently in the discussion. Those attending the confab included Marc H. Morial, president of National Urban League, Rev. Al Sharpton, Ben Jealous, NAACP National President and Melanie Campbell, president of the National Coalition on Black Civic Participation, National Newspaper Publishers Association (NNPA) Chair Cloves Campbell, Southern Christian Leadership President Charles Steele and Ron Daniels, president of the Institute of the Black World 21st Century.

"The plight of the African-American community underscores the urgency of our demand," the attendees said. "The African-American community was disproportionately battered by the Great Recession, and has benefited the least from the fragile economy recovery. Unemployment remains unacceptably high; income inequality and the ever- widening wealth gap threaten to relegate the black community to perpetual underclass status. Those who wish to curtail investment education and career preparation further dim the prospects for upward mobility for our young people."

AFL-CIO President Richard Trumka has expressed some optimism about the chance of effective action on the jobs front during Obama's new stint in the White House. "It all starts with the political will, or the national appetite, to again create jobs that are going to be family-supportive and middle-class producing, and I think that's underway right now," Trumka has said. "People are talking about it. That's the difference between this election and the ones in the past. We actually had a debate about what's hollowing out the country and what isn't. And our side won, big time."

Still, there is ample reason for doubt about the Administration's resolve and the chances of really getting something meaning accomplished. There was mention of trying to ensure that "every person can find independence and pride in their work" and adequate "wages of honest labor" in the President's second inaugural address; there was no reference to those who cannot find work.

"On election night in Chicago two months ago, President Barack Obama triumphantly pledged to fight for a middle class he'd appealed to relentlessly - and successfully - on the 2012 campaign trail, wrote Dave Jamieson and Arthur Delaney of the Washington Post last week. "I believe we can build on the progress we've made and continue to fight for new jobs and new opportunity and new security for the middle class," Obama said. "I believe we can keep the promise of our founders, the idea that if you're willing to work hard ... you can make it here in America."

"The central challenge of Obama's second term is whether he can keep that founder's `promise' to working Americans," wrote Jamieson and Delany." It won't be easy, and in an era of divided government and amid cries for austerity and budget cuts, it does not seem likely that the president will offer sweeping new proposals to do so. The administration has said that its top two priorities at the outset of its second term are immigration reform and gun control. Despite an ongoing jobs crisis, creating quality jobs seems to have fallen a few slots on the president's to-do list."

"So, it's not just African Americans who the GOP has it out for. And this is my concern about the future of the black agenda. We have all identified the bad guy and it's not President Obama," wrote Etan Thomas, an 11-year NBA veteran and author, along with Nick Chiles, of Fatherhood: Rising to the Ultimate Challenge, Fatherhood: Rising to the Ultimate Challenge, and the recently released, Voices of the Future. who participated in the black agenda confab. "The question I have for the over 60 civil rights leaders who convened this week is: how do we defeat the opposition when it appears as though they would rather see President Obama fail then see America succeed?'

BlackCommentator.com Editorial Board member and Columnist Carl Bloice is a writer in San Francisco, a member of the National Coordinating Committee of the Committees of Correspondence for Democracy and Socialism and formerly worked for a healthcare union.