Voices of Protest from Tahrir

The Brotherhood, the military and the property class are increasing their stranglehold on society, but the spirit of revolution, two years on, is undiminished. The youth, women and workers have not been defeated, and they want their voices heard. 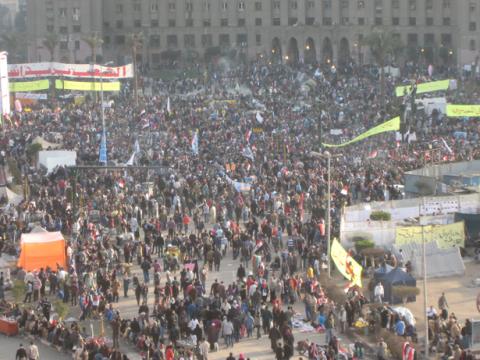 Thousands of thousands of demonstrators fill Tahrir Square to mark the second anniversary of the Egyptian revolution, Carl Finamore

CAIRO: On the second anniversary of the Egyptian revolution, the scene at Tahrir Square was a dramatic example of the quandaries facing the country.

Tens of thousands of demonstrators poured into the square yesterday to celebrate the 18-day revolution that, two years ago, ended the corrupt 29-year rule of President Hosni Mubarak. But as Egyptians continue their struggle today, they find themselves divided over its goals and direction.

Though the huge numbers in Liberation (Tahrir) Square recalled last year's demonstration, the composition of the crowd was markedly different.

This time, the Muslim Brotherhood, the largest mass organization in Egypt that also controls most major government posts, was conspicuously absent.

As Morsi's opposition was preparing to mobilize in cities across Egypt, the Muslim Brotherhood ordered its supporters to stay off the streets. Their partners, the more orthodox Salafists who won 20 percent of the vote in December 2011 elections, also avoided the square.

"Today, Liberation Square belongs to us -  those who are against the Muslim Brotherhood and the control it has on their puppet president, Mohammed Morsi," 26-year-old jewelry designer Nadia explains.

At least 500,000 demonstrated in cities across Egypt, with seven reported dead as clashes ensued and police fired teargas on protesters in Cairo.

The split in the political and social landscape that Nadia describes is deep and wide.

In a televised address on Thursday night, Morsi described a "counter-revolution" at work and denounced protesters as "remnants of the ousted-Mubarak regime."

While Egyptians united spectacularly to push for the departure of Mubarak, the rifts in the post-revolutionary landscape began forming immediately afterwards. As jubilant throngs remained amassed in Tahrir Square to push for broader changes, Muslim Brotherhood clerics who had themselves been jailed and exiled by previous regimes began telling the crowds to support the military and return to work.

On the revolution's first anniversary, the Brotherhood's planned celebration was interrupted by tens of thousands chanting, "The revolution is not finished! You are in parliament celebrating and we are in jail and without jobs."

These divisions substantially increased as the Brotherhood strengthened its hold on the state news media and in the constituent assembly writing the contentious new constitution. The constitution, ultimately, was approved with only 33 per cent of eligible voters showing up at the polls.

Significantly, Morsi has also moved by presidential decree and through the power of appointment to take control of Mubarak's corrupt but still-functioning government union federation, which claims five million members.

Though the Brotherhood has claimed since Mubarak's departure that it has no interest in seeking a majority in Parliament, writing the new constitution or altering the secular nature of politics, it has pursued the opposite path. The constituent assembly that wrote the constitution, signed into effect in December 2012, was stacked with a majority of Muslim Brotherhood and Salafist appointees.

"Many are shocked by the low level of honesty," says 52-year-old Nader. "The government speaks in religious language but many Muslims say, `this is not our religion.' They may have voted for Morsi but have changed their mind." Nader works with newly emerging independent unions and also criticizes the constitution for not clearly declaring freedom of assembly or the right to strike.

Two years ago, Tahrir became a world-famous symbol of courage and tenacity, and demonstrators across Egypt have revived the message of equality and social justice. But courage and tenacity alone cannot overcome the tremendous power of the army and its uneasy and unstable partnership with the Muslim Brotherhood. The country's government has acquiesced to International Monetary Fund demands to cut subsidies to the poor, stop strikes and oppose increases in wages - all designed to pay off foreign banks and to protect domestic business owners.

Can the broad-based opposition seen in Tahrir coordinate national actions in defense of democracy, social justice and economic reform?

Thus far, this has not happened. "The big problem," says 30-year old tour guide and socialist activist Hayat, "is that there is no national coordination of actions except for election coalitions."

It is precisely in the electoral arena where the Muslim Brotherhood and the parties of property are strongest.

According to the Middle East Research and Information Center, workers have conducted 2,400 work stoppages and other forms of protests since Morsi's inauguration. But these have been limited to individual work sites. But there has been no national coordination of labor actions.

Just as workers were decisive in toppling Mubarak by engaging in the largest strike wave in Egyptian history, political activist Hayat believes they can also "be the nucleus of a broad action protest coalition." They can do this by "combining their economic demands with social justice and democratic demands" that would appeal to youth and women who are somewhat distanced from the struggles of workers.

While these coalitions remain tenuous, the Brotherhood, the military and the property class are increasing their stranglehold on society.

But the spirit of revolution, two years on, is undiminished. The youth, women and workers have not been defeated, and they want their voices heard.

[Thanks to the author for sending his article to Portside.]