In Walmart and Fast Food, Unions Scaling Up a Strike-First Strategy 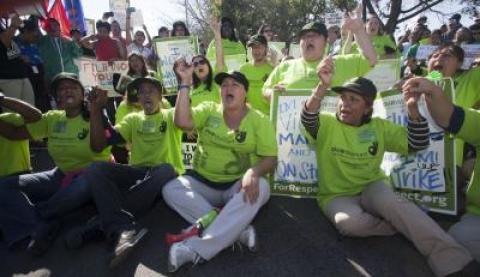 OUR Walmart members near Los Angeles were among several hundred retail workers who struck dozens of stores on Black Friday. Walmart workers are ignoring the typical path to a union. , Photo: OUR Walmart.

"The labor movement is all about results," says Dan Schlademan, who directs the Making Change at Walmart project of the Food and Commercial Workers (UFCW). "The results are creating the energy."

Walmart is a particularly rich target because the company is so large that it sets wages and prices among suppliers and competitors.

What's the strategy behind the latest surprising wave of activism?

Like most new organizing in the private sector, decades of attempts to unionize Walmart stores in the U.S. and Canada have been met with firings, outsourcing, and even closings.

So retail workers who staff the stores, warehouse workers who move Walmart's goods, and even guest workers who peel crawfish for a supplier are ignoring the path laid out by U.S. labor law, in which workers sign a petition asking to vote on a union.

Instead, they're exercising their rights to redress grievances together, whether a majority can be rallied to support the effort or not.

One-day strikes in dozens of stores last October and November protested illegal retaliation against those who had spoken up at their workplaces and joined the Organization United for Respect at Walmart. Several had been fired and many experienced threats and cuts in hours for their participation.

"We have a way to respond to illegal actions," Schlademan said: "the power of the strike."

Inspired by the Walmart warehouse and store strikes, workers launched one-day strikes in New York City a week after Black Friday. Workers marched back in with clergy, elected officials, and press, shaming managers who had hoped to retaliate, and reinstating one Wendy's striker when her manager fired her for participating.

But the next steps are far from certain. "Are you trying to have a union like we have now? If so I would say forget it, don't do it," said Rick Smith, who was involved in a 2005 pilot project to organize Walmart in Florida. Instead, he advised activists to "figure it out as you go along."

That's pretty much the attitude of organizers who are making interesting things happen in warehouses, retail, restaurants, fast food, and along Walmart's supply chain from the ports to the stores.

"The labor movement has tried a range of strategies over the last 20 years," said Mark Meinster, who's organizing Walmart warehouse workers in Illinois. "Comprehensive campaigns, neutrality agreements, NLRB organizing--and while we've learned a lot through those strategies, none of it has reversed the decline.

"So now we're at a point where there's openness to new strategies. There's an understanding that we won't get labor law reform soon, that employers will continue to take a more aggressive stance toward workers and their unions, and so unions are looking at ways to impact those employers economically."

Meinster also praised the skills labor has learned in its decades of operating from weakness: research, using the law, capital strategies, international work. The trick now, he said, is to combine those staff skills with building leaders in the workplaces and a willingness to use pre-majority organizing and, if workers so choose, strikes.

"I don't know how to grasp corporate attention," said Martha Sellers, a cashier in Paramount, California, who struck on Black Friday. "I expect we get to them through their paycheck."

Despite Walmart's fearsome reputation, the Black Friday strikes did not produce additional firings. "We're not assuming a new reality inside the company, but it's interestingly quiet," said Schlademan.

The walkouts involved some 500 workers in dozens of stores. In some stores as few as two workers struck; in others half the shift walked out.

Around 13 walked out of the Walmart in Paramount. "We were all scared, but we did it," said Sellers. Though the store is now more understaffed than ever, managers have not taken action against the strikers, she said, and are "being very careful about what they say."

That calm may be because the public eye is on Walmart. The actions at 1,000 stores held by community supporters, ranging from small informational pickets outside to musical flash mobs inside, gained plenty of media glare.

Walmart also wants to protect its image because it's trying to convince city councils to let it build in urban areas that have thus far rejected the big box, markets like New York City and Seattle. Having paved rural and suburban America with its stores, Walmart is desperate to grow in cities.

Nick Allen of Warehouse Workers United believes Walmart cares about "reputational harm" that can't be quantified, like the hit the company took when 112 apparel workers at a supplier were burned to death in Bangladesh. "When you're the biggest employer it puts a level of scrutiny on you," he said.

But even with Walmart on its best behavior for now, it's unclear--even to organizers--how to take today's retail effort to the next level. Many worker complaints, such as those about health care or pay, hit the heart of Walmart's low-road business model and solutions can't be extracted from local store managers.

For example, workers want regular shifts. But managers get bonuses (and preserve their jobs) by keeping labor costs down using a hated just-in-time scheduling system, said Nelson Lichtenstein, a historian who writes about Walmart.

Still, "Walmart will accommodate various kinds of pressures," said Lichtenstein, as long as it doesn't mean recognizing a union. The penny-pinching corporation contradicted its own forecasts and raised wages in 700 of its stores in 2006, according to recently revealed company communications. The increase was likely a result of vigorous non-majority organizing in 2005 and 2006 (see sidebar).

And on January 15 there was a sign the strikes have made top management defensive about scheduling. Walmart CEO Bill Simon announced vague intentions to change the company's scheduling practices, which elicited a skeptical response from OUR Walmart: "We need these words to translate into real action."

If the current effort ends up raising Walmart pay substantially, it will be good news for retail and grocery workers around the country--another reason for organizers to target the company.

Walmart employs nearly one out of every 100 U.S. workers. It also sells more groceries than any of the largest U.S. grocery chains and undermines wages for grocery and other retail workers, many of them UFCW members. Walmart's poor standards are used to justify low pay and unpredictable schedules everywhere from big box Target to New York boutiques.

OUR Walmart's demands include $13 an hour, and fast food workers in New York and Chicago recently united under the banner of "Fight for $15." Politicians are limping behind. In January, New York Governor Andrew Cuomo suggested that the state's minimum wage should increase by $1.50 to $8.75, still miserably low. Nationally, the average Walmart worker makes around $8.81.

Trying to pit workers against customers, naysayers claim that higher wages will increase Walmart's prices. But a recent study by the think tank Demos calculated that if all big low-wage retailers raised store workers to $12.25 a hour, it would lift three quarters of a million Americans above the poverty line--and cost customers only 15 cents per shopping trip.

Meanwhile, those same customers' own wages have been dragged down by the Walmartized economy. According to the Economic Policy Institute, the Walton family controls $100 billion, more wealth than the bottom 42 percent of Americans combined.

Walmart has more than 4,000 stores and 1.4 million employees in the U.S., so OUR Walmart has just scratched the surface. Hoping to grow quickly, organizers describe the group as "open source," meaning that workers can stumble upon it, talk to existing activists, and then organize themselves. The group boasts thousands of members, up from 100 in early 2011, in 43 states.

Members pay dues of $5 a month. UFCW has put in considerable resources and is "in it for the long haul," said Schlademan.

Walmart managers are spreading the word, too. As Black Friday protests approached, workers around the country reported meetings warning them not to participate.

There is a spontaneous quality to the group. OUR Walmart's Facebook page bustles with discussions of goings-on at the stores. Workers compare their quarterly profit-sharing bonuses (measly), tell stories about crazy managers (one in Alabama recently held a 30-minute meeting in the freezer to punish staff), compare their hours (dropping since Christmas), and write in to ask for help.

"I work at the Walmart in Moultrie, Georgia," wrote Michael Brady on December 30. "Managers use their power to fire people just because they don't like you... I heard about this group from a friend and we really need some help here."

Others are frustrated at work but express skepticism about organizing. "There will never be respect for us, we just work, that's all we do... The ones that bitch get fired, so good luck with your little deal here," wrote Travis Ratajcyzk, an unloader in Covina, California.

OUR Walmart activists in other stores reassured him they had been active for over a year and had not been fired.

It's possible the current composition of the National Labor Relations Board is helping forestall retaliatory firings. In 2000, Walmart faced board charges for retaliation against store employees across the country. Forty-one were fired for concerted activity between 1998 and 2003, says UFCW.

The union hoped to win a broad injunction against the company, which might have given workers nationwide breathing room to organize. But, according to Lichtenstein, Walmart made a call to the White House, and the incoming Bush administration promptly fired sympathetic NLRB General Counsel Leonard Page. The complaint went nowhere.

Under President Obama, the board and general counsel have been more sympathetic to worker organizing and have even sought injunctions against anti-union activity at other companies.

The board could be helpful if the company returns to its "fire first, deal with the legal problems later" attitude.

"We're assuming the worst and hoping for the best," said Schlademan of the company's recent behavior. "Walmart is good at being patient and waiting until the spotlight is off of them."

In preparation, the union and OUR Walmart have been trying out adopt-a-store ideas, so community members can immediately raise a fuss if workers are fired. They've also been developing an electronic rapid-response system and connecting with sympathetic local clergy and elected leaders. And they plan more strikes.

Jenny Brown is a staff writer for Labor Notes.jenny@labornotes.org