Government is Hurting the Economy - by Spending too Little

In light of the report that the economy contracted in the last quarter of 2012 due partly to cutbacks, Ezra Klein notes that one man's big government socialism is another man's premature and destructive fiscal retrenchment. 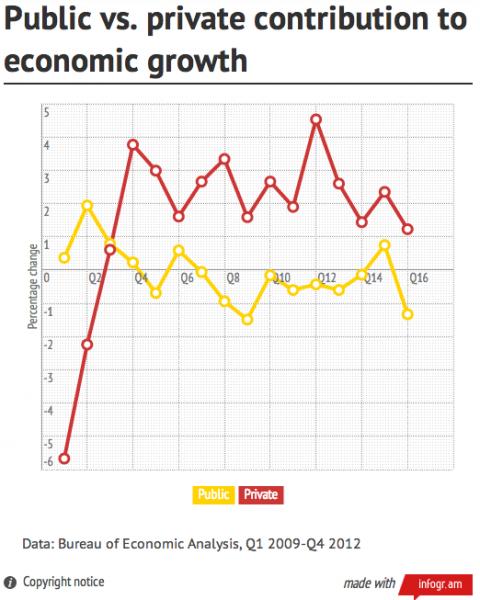 The contribution of private spending and public spending to economic growth. Here are those numbers since 2009., WashingtonPost.com
You've heard this before: The government is holding the economy back. And it's true. The newly released numbers for economic growth in the fourth quarter, which show the economy shrinking at an 0.1 percent annual rate, prove that. But exactly what the government is doing to hold the economy back might surprise you.
Typically, when people say the government is hurting the recovery, they mean that deficits are too high and uncertainty over future policy is scaring businesses. But there's little evidence of that.
The main reason to worry about deficits is that they'll hike interest rates, as government borrowing crowds out private borrowing, and that makes it harder for businesses to grow and individuals to invest. But interest rates are about as low as they've ever been. After accounting for inflation, the federal government has been able to borrow at an unprecedented negative inflation-adjusted rate - so, the market is, essentially, paying us to keep their money safe - since 2011.
As such, most deficit hawks warn that the problem with our deficits is that markets might, at some point in the future, move unpredictably and swiftly to punish us for our deficits. Perhaps that's true. But implicit in that argument is that there's no real evidence that deficits are hurting the economy now.
Nor is there strong evidence that businesses are holding back on investment for any reason save lack of demand. The general factoid you hear in support of this argument is that corporations are sitting on more than $2.5 trillion in cash, with the implication being that they'd be spending that cash if not for the paralyzing effects of federal policy.
But the build-up of cash reserves - or, to be more technical (and more accurate), "liquid assets" - is a long-term trend that hasn't accelerated since the recession. The Federal Reserve keeps data on liquid assets held by non-financial corporations, and the build-up was faster from 1997 to 2000 than it was from 2008 to 2011. Why corporations are holding so much more cash is an interesting mystery, but it's not one that began with the passage of Obamacare.
That said, the government is hurting the recovery, and badly. But it's not because it's spending too much, or because of concerns over future policy. It's because government, at all levels, is spending and investing too little. Despite the stimulus and various other policies we've passed to help the recovery, and despite the large deficits the government has been running, government spending and investment have, at all levels, been contractionary since 2010.
The new numbers the Bureau of Economic Analysis released on fourth-quarter economic growth have received considerable attention for the clear damage that falling government spending did to the economy. According to the BEA, "government consumption expenditures and gross investment" knocked 1.33 percentage points off the total change in economic growth. If government spending had just been neutral - that is to say, if it had neither contracted nor expanded - the economy would have grown by 1.23 percentage points rather than shrunk by 0.1 percentage points.
But this isn't the first time that total government spending and investment has been a drag on growth. It pulled growth down by 0.67 percentage points in 2010, .34 in 2011, and .33 in 2012. This is the strange, counterintuitive truth of government policy over the last three years: We haven't been spending enough to keep growth steady, much less help it along.
This graph helps tell the tale. It compares actual GDP growth since 2010 with GDP growth after subtracting government expenditures and investments (note that it misses any contributions, positive or negative, of tax policy). In only two quarters is growth helped by including the government's role. In all other quarters, government spending and investment were contractionary:
A big reason for this is cutbacks on the state and local level, which have been much larger than cutbacks at the federal level. In 2010, for instance, federal spending took 0.23 percentage points off GDP, while state and local spending took 0.43 percentage points off. As such, Washington often misses the overall contraction in government spending, as the bulk of that contraction has been at the state and local levels. But federal spending has been contracting too.
Another way of looking at this data is to compare the contribution of private spending and public spending to economic growth. Here are those numbers since 2009:
Economists expect that to continue. Mark Zandi of Moody's Analytics projects the sequester alone will cut 0.5 percentage points off growth in 2013 if it's allowed to go into effect. Add that to the expiration of the payroll tax cut and assorted other belt-tightening measures at the federal level and total fiscal drag, he says, is likely to be more than one percentage point of GDP in 2013 - a significant hit when total GDP growth isn't expected to be above three percentage points.
These numbers, by the way, only measure the most direct contribution of government spending. They don't measure indirect contributions, as when a defense contractor uses money from his federal contract to buy a house. His house purchase would've shown up in private investment, not public investment, but its absence doesn't show up anywhere at all.
So yes, the government is hurting the recovery. But it's not because of deficits or uncertainty, or at least, it's hard to find evidence for either theory. The real, provable damage the government has done to economic growth in recent years has been in cutting back on spending and investment since 2010.
[Ezra Klein is the editor of Wonkblog and a columnist at the Washington Post, as well as a contributor to MSNBC and Bloomberg. His work focuses on domestic and economic policymaking, as well as the political system that's constantly screwing it up. He really likes graphs, and is on Twitter, Google+ and Facebook. E-mail him here.]