Syria: How We Can End The Bloodshed

Israel's attack on Syria shows how volatile this conflict is. A political solution is now urgent. 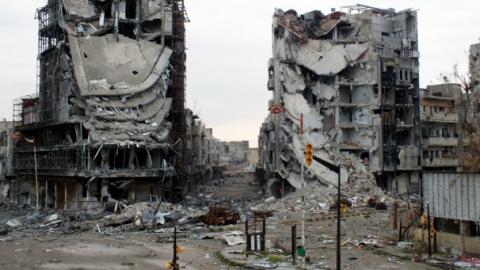 , Euronews.com
The motives behind Israel's attack on Syria on Wednesday are still as obscure as the nature of the target. But two things seem clear. It was related to Israel's long war with Hezbollah in Lebanon rather than any desire to intervene in the fighting in Syria. Yet the attack was also a reminder that Syria's turmoil is having dangerously unpredictable consequences across the region.
Finding a viable political solution is therefore all the more urgent. So it was good to hear that Moaz al- Khatib, who leads the Syrian National Coalition - the group of exiles who support armed intervention against the Syrian government and are backed by western and Gulf Arab states - now advocates talks with Basher al-Assad's people. This is not the view of French, British and US leaders or most of Khatib's Syrian colleagues, who talk vaguely of a political outcome but only mean Assad's unilateral surrender.
Their unrealistic line was on display again on Monday, when France hosted the so-called Friends of Syria. Its analysis was gloomy. State institutions are collapsing, Islamist groups are gaining ground, more and more Syrians are dying, and there is no breakthrough in sight. "We cannot let a revolution that started as a peaceful and democratic protest degenerate into a conflict of militias," said Laurent Fabius, the French foreign minister, even as he talked of more aid on the battlefield.
Several civic groups that reject the armed struggle were equally pessimistic at a meeting in Geneva. Theirs is the voice of Syria's secular intelligentsia, who oppose foreign military intervention and favour a ceasefire and a negotiated solution on the lines that Lakhdar Brahimi, the UN/Arab League mediator, is trying to broker. Because they do not support the western line, they tend to be ignored by foreign politicians.
Many live in Syria. Indeed, their contingent in Geneva would have been more impressive if the Swiss had not denied visas for almost 60 people. Rajaa al-Nasser, a Syrian lawyer from the National Co-ordination Body for Democratic Change, says a Swiss official told him the reason was political. Haytham Manna, the leader of the NCB's foreign wing, believes France asked the Swiss to block insiders who might puncture the myth that the west's clients represent all Syrian opinion. The Swiss foreign ministry was not available for comment.
Assad's non-violent opponents agonise most over whether to accept his recently renewed offer of a "national dialogue". Several have spent years in prison and distrust the government. But as casualties go on rising, those oppositionists who favour negotiations won out in Geneva, calling for talks on a new constitution and a transitional government.
Meanwhile to everyone's surprise, on Wednesday the Gulf states - not normally big aid-givers - came up with most of the cash to fund a UN appeal for $1.5bn to help homeless Syrians in the country and in refugee camps abroad. Britain added $50m. Important though this is, British ministers have been as silent as their friends in the Gulf on the real cause of the humanitarian disaster. To listen to them one would think the Syrian government bears all the blame.
In 2011 Syrian forces fired live ammunition at unarmed demonstrators, and their use of artillery and aerial bombing has frequently been disproportionate, as Russian ministers have also said. But the crisis has deepened because of the weapons and logistical help given by Arab and western governments. William Hague may proclaim that Britain only supplies "non-lethal equipment", but this is sophistry. By supporting one side in an armed uprising and aiding militarisation through field radios and satellite equipment, Britain has blood on its hands.
Giving generously to feed and house homeless civilians will help, but Syrians would be better served by intelligent politics than charity - an embargo on arms to either side, and serious efforts to persuade rebels and government that military victory is a delusion. The Syrian National Coalition depends on foreign support. Now is the time for the west to tell its friends to work with Brahimi on a ceasefire, and for Russia and Iran to make the same case to Assad. Two ceasefire attempts made little headway last year because the rebels and their sponsors did not take them seriously. A far more sustained effort is needed now.
[Jonathan Steele is a Guardian columnist, roving foreign correspondent and author. Since 9/11 he has reported from Afghanistan and Iraq as well as on the Israeli/Palestinian conflict. His new book is Ghosts of Afghanistan]