A sportswriter looks back on his history with America's favorite pastime. 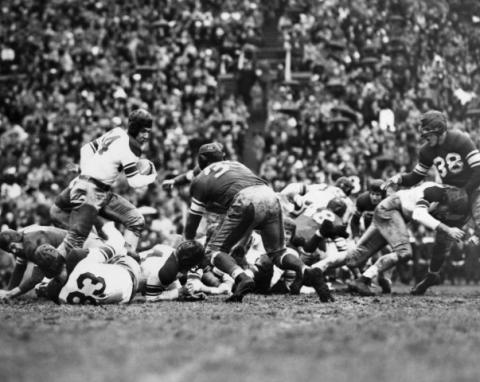 Like many sons of the South, my father introduced me to The Game at a young age. Some of my earliest memories are of running around our living room with a Nerf football tucked under my arm, him playfully chasing after me. I spent plenty of time playing tackle football in the backyards around our suburban Houston neighborhood when some parents convinced my father to sign me up, at the age of ten, for the local Little League team.

In Texas, ten years old is a little late for a boy wanting to play organized football. But I took to the game quickly, starting out as a quarterback (where I had the distinct skill of being able to remember all the plays), moonlighting as a defensive back for a couple of seasons, and then settling in as a running back in high school. Just like my father had. By my senior year, I had performed well enough to draw interest from a few small colleges. My parents nudged me to Texas Christian University, which was only four hours away.

Two years later, stuck behind one of the best running backs of our generation (LaDainian Tomlinson, who went on to play in the NFL for 11 seasons) and a few others, weary of the game’s unending grind, and hopeful that I could write about games better than I could play them, my football career came to an inconspicuous end at the age of 20.

I had a mostly unremarkable, short career in football—yet that was still more than enough time for the game to leave its mark, all over my body. I had been dealing with arthritis, joint stiffness, and backaches for years when a weight-room mishap drove me to an emergency clinic in the summer of 2010, when I was 32. Several follow-up appointments ended with me in an MRI machine and an appointment with a neurosurgeon.

The neurosurgeon spent some time reviewing the MRI and had some concerns; namely, two herniated discs and fairly pronounced degenerative disc disease, leaving me with the neck of a septuagenarian. Surgery was an option, but was usually a last resort for someone as young as me, she said. Surgery could temporarily relieve the pain but would fail to slow the disease. It would be a better option when I actually made it to 70.

She asked if I had previously suffered any trauma to that particular area. When I told her I played football in high school and, briefly, in college, she nodded. My neurosurgeon dealt all the time with young-old necks like this—those of former football players. So it was that my father had bequeathed a love of America’s favorite blood sport and a degenerative disc disease to his only son. Some days, this seems like a satisfactory trade, a fair price to pay for those gorgeous autumn Fridays under the stadium lights and the countless Saturdays spent watching our helmeted heroes. On those days when my neck stiffens and my back seizes up with pain, and sprawling on the floor provides only the briefest moments of relief, it seems less so.

I’ve been thinking about that bargain—made by tens of thousands of others—this week as millions of people around the country gear up for our largest sports spectacle, the Super Bowl. An estimated 179 million people—yet another record audience—are expected to gather around televisions to watch the San Francisco 49ers and Baltimore Ravens compete for the Lombardi Trophy. If you like watching giant men collide, which most people who like football do, Super Bowl XLVII will not leave you wanting. The Ravens boast possibly the game’s greatest linebacker, Ray Lewis, and one of its premier headhunters in safety, Bernard Pollard, who forced a game-turning fumble in the AFC Championship Game by knocking an opposing runner unconscious in midstride. On the other side, the 49ers have returned to their ’80s glory on the strength of a defense as violent as any in the league.

If you don’t like collisions, or find them increasingly difficult to stomach, perhaps you have already joined the growing chorus of fans—and former fans—who fret over the health of the dozens of well-compensated men who will limp off the field Sunday into uncertain futures.

Since scientists first began researching chronic traumatic encephalopathy (CTE), about a decade ago, each new study has brought increasingly terrible revelations about what football does to players’ health. They die young, and others grow demented as old men, because their brains sustained concussion after concussion. Then, we found out that the disease was present in players who had never even been diagnosed with concussions, that it was found in men who had played only college football, and that damage accumulated not only through big hits but the tiny collisions and tackles that are integral to not only games but practices. There are questions as to whether the brain damage is linked to depression and suicide among former players. Just last week, researchers at UCLA revealed they had found a protein that causes football-related brain damage in five former NFL players, the first time the disease had been identified in living players.

A day after the UCLA study came out, the family of Junior Seau, a Pro Football Hall of Fame contender, who committed suicide in May, announced they were filing a wrongful death suit against the NFL. “While Junior always expected to have aches and pains from his playing days,” they say in the suit, “none of us ever fathomed that he would suffer a debilitating brain disease that would cause him to leave us too soon.”

Similar words echoed into a bay of microphones and cameras at the Superdome earlier this week when Ravens safety Ed Reed wondered aloud if the game he had played so well and so violently was already taking a toll on him. “There’s been some things that honestly put up a flag,” he told reporters. “Just stuff that I know, stuff that I know I’ve been through, minor, [things where I said], ‘Oh, my, this might be because I’ve been playing football so long. I’m sure there is going to be something related to football.' ”

President Barack Obama weighed in when he recently told The New Republic that if he had a son, “I’d have to think long and hard before I let him play football.”

And CTE is only football’s most dramatic effect on players’ health. As yet, we still haven’t thoroughly catalogued the way in which it turns young men into old ones well before their time.

Back in the early ‘80s, not many people worried about whether they should let their sons play. Certainly not my father. The game had been good to him: He was an all-state performer at his segregated high school in Hot Springs, Arkansas, and went on to play at since-closed Huron University in South Dakota. (He later served in Vietnam and finished college in Arkansas.)

Even as he grew older, his swollen biceps tugged at his shirts, and he had the broad and chiseled chest of men half his age. He taught me how to do a proper bench press when I was eight, gave me raisins instead of candy, and kept our pantry stocked with protein bars, his way of ensuring I grew up firm and strong like him. Few things in the world impressed me as much as his tales of losing a front tooth after a particularly vicious tackle, or once getting hit so hard that he went to the wrong team’s huddle. “I was dizzy for quite some time. I even stayed in the game. I didn’t miss a snap,” he said, pride still in his voice.

Back then, few people discussed the consequences. Growing up in Houston as an Oilers fan, I had heard stories of how Earl Campbell—my favorite player —was limping through retirement and eventually gave up limping for a wheelchair in his early fifties. Even my dad, by the time he was in his forties, was regularly visiting a chiropractor and applying warm compressors to ease the aches and pains in his neck and back.

I was ten when I first heard the word “concussion.” One of my teammates missed a game because, we were told, he had a headache. At the time, I couldn’t help but think he was soft. Just not cut out for the game and, consequently, weak. I was 17 when I got my first concussion. A guy I’d like to think of as a coward blindsided me while I was in pursuit of the opposing kick returner. I bounced up quickly, stumbled over to the sideline, vomited behind the bench and told no one about the ringing in my helmet. Like my father, I didn’t miss a snap.

I was 19 when I got my second concussion. The details are fuzzy. It was hot and we were hitting particularly hard in practice that day. I allowed myself to miss the end of the workout, mostly because it was more than 100 degrees. I couldn’t help but think that I was soft. I was in my late twenties when I realized that I didn’t have a full range of motion in my neck and couldn’t sleep without discomfort. Looking directly over my left shoulder was impossible.

And it was at that visit to the neurosurgeon in the summer of 2010 when I learned of my inheritance: a lifetime of neck pain that would likely grow only more intense with age. If I live to be in my seventies, it will probably come with some reflection over whether playing was worth the pain.

Is it worth it? I recently asked my father, now 65 and someone who doesn’t have the luxury of foresight like President Obama and the rest of us do now. “I still say, yes,” he said, laughing. “I have a love for the game, and football is a part of my life. That was basically one of the reasons I went to school. If I didn’t play football, I don’t know if I would have stayed in school. But a lot of the problems I’m having today are from football.”

Like most everyone else, we’ll be watching Sunday. This has also been a part of my life, an annual family tradition not much different from a boiling pot of crab and cherry cobbler for Thanksgiving or Christmas. I could no more imagine skipping that dinner than missing Randy Moss and Ray Lewis make their final run at a Super Bowl ring. My appreciation for those meals and the games remains as strong as ever, because I know neither will last forever.

The future can wait for now, but it is inevitable.