The Hanging of Afzal Guru is a Stain on India's Democracy

Just before breakfast, the government of India secretly hanged Afzal Guru, prime accused in the attack on parliament in December 2001, and interred his body in Delhi's Tihar jail where he had been in solitary confinement for 12 years. Was this execution just? Was the trial fair? Or are the political parties and the institutions of Indian democracy on trial? 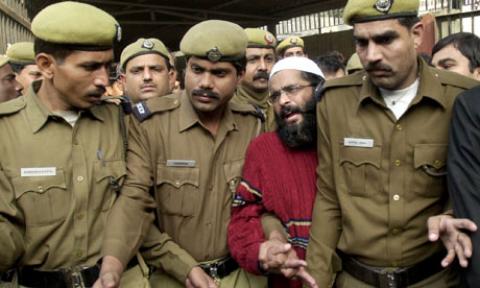 Spring announced itself in Delhi on Saturday. The sun was out, and the law took its course. Just before breakfast, the government of India secretly hanged Afzal Guru, prime accused in the attack on parliament in December 2001, and interred his body in Delhi's Tihar jail where he had been in solitary confinement for 12 years. Guru's wife and son were not informed. "The authorities intimated the family through speed post and registered post," the home secretary told the press, "the director general of the Jammu and Kashmir [J&K] police has been told to check whether they got it or not". No big deal, they're only the family of yet another Kashmiri terrorist.

In a moment of rare unity the Indian nation, or at least its major political parties - Congress, the Bharatiya Janata party and the Communist party of India (Marxist) - came together as one (barring a few squabbles about "delay" and "timing") to celebrate the triumph of the rule of law. Live broadcasts from TV studios, with their usual cocktail of papal passion and a delicate grip on facts, crowed about the "victory of democracy". Rightwing Hindu nationalists distributed sweets to celebrate the hanging, and beat up Kashmiris (paying special attention to the girls) who had gathered in Delhi to protest. Even though Guru was dead and gone, the commentators in the studios and the thugs on the streets seemed, like cowards who hunt in packs, to need each other to keep their courage up. Perhaps because, deep inside, themselves they knew they had colluded in doing something terribly wrong.

What are the facts? On 13 December 2001 five armed men drove through the gates of the Indian parliament in a car fitted out with a bomb. When challenged they jumped out of the car and opened fire, killing eight security personnel and a gardener. In the firefight that followed, all five attackers were killed. In one of the many versions of the confessions he was forced to make in police custody, Guru identified the men as Mohammed, Rana, Raja, Hamza and Haider. That's all we know about them. They don't even have second names. LK Advani, then home minister in the BJP government, said they "looked like Pakistanis". (He should know what Pakistanis look like right? Being a Sindhi himself.) Based only on Guru's custodial confession (which the supreme court subsequently set aside, citing "lapses" and "violations of procedural safeguards") the government recalled its ambassador from Pakistan and mobilised half a million soldiers on the Pakistan border. There was talk of nuclear war. Foreign embassies issued travel advisories and evacuated their staff from Delhi. The standoff lasted months and cost India thousands of crores - millions of pounds.

Within 24 hours, the Delhi Police Special Cell (notorious for its fake "encounter" killings, where suspected terrorists are targeted in extrajudicial attacks) claimed it had cracked the case. On 15 December it arrested the "mastermind", Professor SAR Geelani, in Delhi, and Showkat Guru and his cousin Afzal Guru in Srinagar, Kashmir. Subsequently, they arrested Afsan Guru, Showkat's wife. The Indian media enthusiastically disseminated the police version. These were some of the headlines: "Delhi university lecturer was terror plan hub", "Varsity don guided fidayeen", "Don lectured on terror in free time." Zee TV, a national network, broadcast a "docudrama" called December 13, a recreation that claimed to be the "truth based on the police charge sheet". (If the police version is the truth, why have courts?) The then prime minister, Atal Bihari Vajpayee, and Advani publicly applauded the film. The supreme court refused to postpone the screening, saying that the media would not influence judges. It was broadcast only a few days before the fast-track court sentenced Geelani and Afzal and Showkat Guru to death. Subsequently the high court acquitted Geelani and Afsan Guru. The supreme court upheld the acquittal. But in its 5 August 2005 judgment it gave Afzal Guru three life sentences and a double death sentence.

The BJP called for an immediate execution. One of its election slogans was "Desh abhi sharminda hai, Afzal abhibhi zinda hai", which means (in stirring rhyme), "Our nation is ashamed because Afzal is still alive". In order to blunt the murmurs that had begun to surface, a fresh media campaign began. Chandan Mitra, now a BJP MP, then editor of the Pioneer newspaper, wrote: "Afzal Guru was one of the terrorists who stormed parliament house on 13 December 2001. He was the first to open fire on security personnel, apparently killing three of the six who died." Even the police charge sheet did not accuse Afzal of that. The supreme court judgment acknowledged the evidence was circumstantial: "As is the case with most conspiracies, there is and could be no evidence amounting to criminal conspiracy." But then, shockingly, it went on to say: "The incident, which resulted in heavy casualties, had shaken the entire nation, and the collective conscience of society will only be satisfied if capital punishment is awarded to the offender."

Who crafted our collective conscience on the parliament attack case? Could it have been the facts we gleaned in the papers? The films we saw on TV? Before celebrating the rule of law, let's take a look at what happened.

The people who are celebrating the victory of the rule of law argue that the very fact that the Indian courts acquitted Geelani and convicted Afzal proves that the trial was free and fair. Was it?

The trial in the fast-track court began in May 2002. The world was still convulsed by post 9/11 frenzy. The US government was gloating prematurely over its "victory" in Afghanistan. In the state of Gujarat, the massacre of Muslims by Hindu goon squads, helped along by the police and the state government machinery that had begun in late February, was still going on sporadically. The air was charged with communal hatred. And in the parliament attack case the law was taking its own course. At the most crucial stage of a criminal case, when evidence is presented, when witnesses are cross-examined, when the foundations of the argument are laid - in the high court and supreme court you can only argue points of law, you cannot introduce new evidence - Afzal Guru, locked in a high-security solitary cell, had no lawyer. The court-appointed junior lawyer did not visit his client even once in jail, he did not summon any witnesses in Guru's defence, and he did not cross-examine the prosecution witnesses. The judge expressed his inability to do anything about the situation.

Even so, from the word go the case fell apart. A few examples out of many: The two most incriminating pieces of evidence against Guru were a cellphone and a laptop confiscated at the time of arrest. They were not sealed, as evidence is required to be. During the trial it emerged that the hard disk of the laptop had been accessed after the arrest. It only contained the fake home ministry passes and the fake identity cards that the "terrorists" used to access parliament - and a Zee TV video clip of parliament house. So according to the police, Guru had deleted all the information except the most incriminating bits. The police witness said he sold the crucial sim card that connected all the accused in the case to one another to Guru on 4 December 2001. But the prosecution's own call records showed the sim was actually operational from 6 November 2001.

How did the police get to Afzal? They said that Geelani led them to him. But the court records show that the message to arrest Afzal went out before they picked up Geelani. The high court called this a "material contradiction" but left it at that.

It goes on and on, this pile up of lies and fabricated evidence. The courts note them, but for their pains the police get no more than a gentle rap on their knuckles. Nothing more.

Anyone who was really interested in solving the mystery of the parliament attack would have followed the dense trail of evidence on offer. No one did, thereby ensuring the real authors of the conspiracy will remain unidentified and uninvestigated.

The real story and the tragedy of what happened to Guru is too immense to be contained in a courtroom. The real story would lead us to the Kashmir valley, that potential nuclear flashpoint, and the most densely militarised zone in the world, where half a million Indian soldiers (one to every four civilians) and a maze of army camps and torture chambers that would put Abu Ghraib in the shade are bringing secularism and democracy to the Kashmiri people. Since 1990, when the struggle for self-determination became militant, 68,000 people have died, 10,000 have disappeared, and at least 100,000 have been tortured.

What sets Guru's killing apart is that, unlike those tens of thousands who died in prison cells, his life and death were played out in the blinding light of day in which all the institutions of Indian democracy played their part in putting him to death.

Now he has been hanged, I hope our collective conscience has been satisfied. Or is our cup of blood still only half full?