Underneath global apparel's glitzy makeup lies an unglamorous underbelly - one of violent working conditions and structural faux pas. Case and point: factory fires. In September 2012, 300 garment workers lost their lives when a factory caught ablaze in Pakistan - two months later, 112 deaths after a similar tragedy in Bangladesh. Add China to the list, and 2012 will go on record as the deadliest year to be a garment worker. 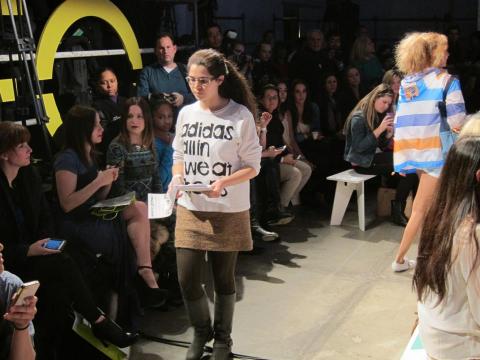 Caitlin McLaren protests worker exploitation in Adidas factories at New York Fashion Week,
`NY Fashion Week' - a celebration of what catches the eye, styles the skin, and teases the mind.  But underneath global apparel's glitzy makeup lies an unglamorous underbelly - one of violent working conditions and structural faux pas.
Case and point: factory fires. In September 2012, 300 garment workers lost their lives when a factory caught ablaze in Pakistan - two months later, 112 deaths after a similar tragedy in Bangladesh. Add China to the list, and 2012 will go on record as the deadliest year to be a garment worker.
And if factory fires and their traumatic aftermaths feel like they're straight out of a history book, you're right. Thumb a bit further through those pages, though, and you'll unlock the key to end factory fires for good...
...Rewind back a century to 1911, a few blocks shy from today's Manhattan `Fashion Week' venue.  Along with straight-front corsets, the fox-trot, and Teddy Bears, NYC's towering Triangle Shirtwaist Factory stood at the cutting edge of style, attire, and Washington Square - until fire struck. In what emerged as the city's largest industrial disaster ever, 146 workers lost their lives. But they did not die in vain.
Enter the International Ladies' Garment Workers' Union (ILGWU) whose raison d'etrewas actualized through a landmark demand - a demand so successful that, along with challenging the hierarchies of the clothing industry and pioneering decades of worker-based reforms, it eliminated US factory fires till date and fought fire with fire.
So what was that demand, and how did it end factory fires?
The Brand Agreement. First signed in 1922, the Brand Agreement(s)- originally called "Jobbers' Agreements"- provided spaces for workers and brands to negotiate directly on issues of wages and conditions, overcoming the resistance of factory owners. The establishment of several Brand Agreements throughout New England (starting with Wiesen, Cohen & Smith in '22 and continuing through the '90s with increased outsourcing) marked the end of factory fires in the US garment industry.
Here's how the agreements worked: first, they held the brands and not just the owners responsible for factory conditions, including safety; second, they ensured that funding associated with factory safety (and living wages) were "ring-fenced" and not compromised; third, they empowered workers on the shop floor to implement measures that they themselves had negotiated.
So, the Brand Agreements met their objectives in the 20th century. Could such agreements help eliminate factory fires in today's globalized apparel industry as well?  We believe the answer is yes.
Then and now, the garment industry has maintained a three-part breakdown: 1. Brand companies (buyers); 2. factory owners (suppliers); 3. factory workers (producers).
Brand companies at the turn of the 20th century maximized profits by creating bidding wars between factory owners. Factory owners, in order to stay competitive and get the most for less, would increase downward pressures on workers. Workers at the factory-floor end of this chain reaction were left with poverty-line wages, deteriorating workplace standards, and increasing incidences of factory fires.
Today, this identical three-part model has gone global with brands like H&M, Adidas, and Nike expanding production into countries like India, El Salvador, and Cambodia.  Parallels between the garment sector - past and present - continue with the following: fire-conducive raw materials, locked exits, faulty or non-existent sprinkler systems, lack of fire prevention equipment or training, high-density workplaces, etc. Such commonalities strengthen the case for the potential efficacy of and imminent need for an international "brand agreement."
Fortunately, a movement has been sparked.
This week thousands of workers- from Guatemala to Indonesia- have sowed the seeds for a modern-day "brand agreement."  Tearing a page out of the ILGWU playbook of the 1920s, workers have gone straight to the top of the supply chain and demanded `brand responsibility' and improved wages and conditions. Brands like Adidas or Nike could be the Wiesen, Cohen, & Smith of 2013.
Déjà-vu.
Trend cycles, like spools of yarn, are a fait accompli. When fashions wane, we reach back a generation; when fires rage, it's a century past. The Brand Agreements that began in 1922 stand out as more than smoke after a fire: they ignited a culture of direct, worker-brand reciprocity and made safeguards the bottom-line. Today amidst global apparel's factory fire epidemic, a resurgence of such agreements isn't just fashionable - it's imperative.
For more info on the campaigns, please visit are: www.adidasworkers.org and www.badidas.com
[Ashok Kumar is a writer, activist and a PhD candidate of Economic Geography at Oxford University. He was a contributor to The Assault on Universities: A Manifesto for Resistance (Pluto 2011) and It Started in Wisconsin: Dispatches from the Front Lines of the New Labor Protest (Verso 2012).
Chetan Ahimsa is an activist and actor in South India. His films include Birugaali (Hurricane), Aa Dinagalu (Those Days) and the upcoming Mynaa.]
[Thanks to the authors for submitting their article to Portside.]