Israel and Syria: Behind the Bombs

Why did Israel launch an air attack on Syria on January 29th? There is no evidence that the attack had anything to do with the SA-17, which, in any case, both Tel Aviv and Washington know would not pose any real danger to Israel. So what are some other possible reasons for the attack? 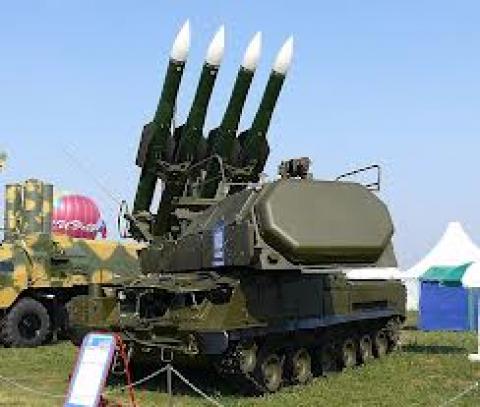 Now that the dust has settled—literally and figuratively—from Israel’s Jan. 29 air attack on Syria, the question is, why? According to Tel Aviv, the bombing was aimed at preventing the transfer of sophisticated Russian SA-17 anti-craft missiles to Hezbollah in Southern Lebanon, which one former Israeli military intelligence officer said would be “a game-changer.” But there are major problems with that story.

First, it is highly unlikely that Damascus would turn such a system over to Hezbollah, in part because the Russians would almost certainly not have allowed it, and, secondly, because the SA-17 would not be terribly useful to the Lebanese Shiite organization. In fact, we don’t even know if an SA-17 was the target. The Syrians deny it, claiming it was a military research center 15 miles northwest of Damascus that was bombed, killing two and wounding five.  The Israelis are refusing to say anything. The story that the anti-aircraft system was the objective comes mainly from unnamed “western officials.”

The SA-17 is a capable, mid-range, anti-aircraft weapon. Designated “Grizzly” by the North Atlantic Treaty Organization (NATO), it consists of four missiles mounted on a mobile launcher. It has a range of 30 miles, a ceiling of close to 50,000 feet, and can down anything from aircraft to cruise missiles. Introduced in 1998 as a replacement for the SA-11 “Gadfly,” the SA-17 has been sold to Egypt, Syria, Finland, China, Venezuela, India, Cyprus, Belarus, and the Ukraine.

It has a bite. During the 2008 Russia-Georgian War, the SA-17 apparently downed three Russian SU-25s close support attack planes, and an ancient long-range Tupolev-22 bomber. It appears Georgia acquired the anti-aircraft system from the Ukraine without the Russians knowing about it.

The SA-17’s manufacturers claim the system is immune to electronic countermeasures, but every arms maker claims their weapons are irresistible or invincible. The SU-25s and the bomber were downed in the first day of the fighting, before the Russians figured out that the Georgians had a trick up their sleeves and instituted countermeasures. Those apparently worked because the four planes were the only ones the Russians lost. Clearly, however, if one gets careless or sloppy around a “Grizzly,” it can make you pretty uncomfortable.

But “game-changer”? The SA-17 is big and vulnerable, a sitting duck for aircraft armed with long-range bombs and missiles and backed up by electronic warfare capabilities. Israeli counter warfare electronics are very sophisticated, as good—if not better—than the American’s. In 2007 Israeli warplanes slipped through the Syrian radar net without being detected and bombed a suspected nuclear reactor. Damascus acquired the SA-17 following that 2007 attack.

Given that there is open talk by NATO of establishing a “no-fly zone” over Syria, why would Damascus hand over one of its most modern anti-aircraft systems to Hezbollah? And what would Hezbollah do with it? It is too big to hide and is generally used as one piece of a larger anti-aircraft system, which Hezbollah does not have. In any case, it would have been a provocation, and neither Hezbollah nor Syria wants to give the Israelis an excuse to beat up on them. Both have plenty on their plates without adding war with a vastly superior military foe.

In brief, there is no evidence that the attack had anything to do with the SA-17, which, in any case, both Tel Aviv and Washington know would not pose any real danger to Israel. According to UPI, the attack was cleared with the U.S.

So what are some other possible reasons for the attack?

The most obvious target is the Assad regime in Syria, which at first glance would seem to be a contradiction. Wouldn’t Israel bombing Syria unite the Arab countries behind Damascus? Indeed, there were condemnations from the Arab League, Egypt, Lebanon, Turkey, and even some of Assad’s Syrian opponents—although the Gulf Cooperation Council, the league of oil-rich monarchies bankrolling the Syrian civil war, was notably quiet.

But the “protests” were mostly pro-forma, and in the case of Turkey, rather bizarre. Ankara has played a major role in supplying the anti-Assad insurgents, deploying Patriot missiles on its border with Syria, and demanding that the president of Syria step down. Yet Turkish Foreign Minister Ahmet Davutoglu denounced Assad for not “upholding the dignity of his country” and retaliating against Israel.

According to press reports, Israel is strengthening its forces on the occupied Golan Heights that border Syria and preparing to establish a buffer zone on the Syrian side. Israel established a similar “buffer” in Lebanon following its 1982 invasion of that country, a “buffer” that eventually led to the formation of Hezbollah and a humiliating Israeli retreat in 2000.

Israel claims it has no dog in the Syrian fight and is supposedly worried about Islamic extremists coming out on top in the civil war. But for all the hype about Islamists leading a jihad against Israel, Tel Aviv knows that al-Qaeda and its allies pose no serious threat to Israel. It is good politics (and good theater)—in Washington, as well as Tel Aviv—to cry, “the turbans are coming” (quick, give us lots of money and your constitution), but religious extremism and Sharia law hardly pose an existential danger to nuclear-armed countries with large militaries. Fighters from the salafist Jabhat al-Nusrah will not get far marching on Jerusalem.

The bombing attack was certainly a slap in the face to Assad, but not the first, and seems less directed at the Damascus regime than adding yet another ingredient to the witch’s brew of chaos that is rapidly engulfing Syria and the surrounding countries. And chaos and division in the region have always been Israel’s allies. Divide and conquer is an old colonial tactic dating back to the Roman Empire. After World War I, the English used Jews and Arabs as pawns in a game to control the British Mandate in Palestine. In short, the Israelis have learned from the best.

The growing sectarian war between Sunnis, Shiites, and Kurds stirred up by the Syrian civil war lets Israel stand on the sidelines. Who is going to notice the steady encroachment of settlements on Palestinian lands when the Syria war has killed some 60,000 people, created almost 800,000 refugees, and is destabilizing Lebanon, Iraq, and Jordan?

Lastly, there is Iran. Getting rid of Assad would remove one of Iran’s major allies in the region, and also weaken Shiite Hezbollah, the organization that fought Israel to a standstill in 2006.  Assad, says former Israeli Gen. Michael Herzog, “is a linchpin of the radical Iran-Hezbollah axis…his fall would therefore deal a major blow to Tehran, significantly weaken Hezbollah and dismantle the trilateral axis.”

Sectarian chaos in Syria is already washing over into Iraq, where a brutal bombing campaign by Sunni extremists is fueling talk about re-establishing Shiite militias to defend their communities. Islamists are also increasingly active in Lebanon and Jordan.

For several years the U.S. and the Sunni-dominated Middle East monarchies have warned about the dangers of a “Shiite crescent” of Iran, Iraq, and Hezbollah. But the idea of a “crescent” was always more hype than reality—Shiites make up about 15 percent of the region, and are majorities only in Iraq, Iran and Bahrain. Lebanese Shiites constitute a plurality. In general, Shiites are the poorest section of the Muslim community and with the exception of Iran and Syria, have long been marginalized politically.  Shiite “domination” has always been a bug-a-boo, not very real but useful for stoking the fires of sectarianism.

And sectarianism is on the march today in the Middle East, financed by the cash-rich Gulf monarchies and the hostility of the U.S. and its allies to authoritarian secular governments. While NATO overthrew the Libyan government and aids the Syrian insurgency in the name of democracy, it has no qualms about supporting the absolute monarchs that rule from Morocco in the west to Saudi Arabia in the east.

Was the ease with which the Israelis penetrated Syrian air space a message to Teheran as well? Certainly although the odds on Israel attacking Iran sometime this spring are rather low (though hardly non-existent). Israel could do a lot of damage to Iran, but it doesn’t have the weapons or the air power to take out Teheran’s nuclear program. Plus the Iranians, while angry about the onerous sanctions—and cranky as ever about negotiations—are carefully diverting their nuclear stockpiles into civilian use.

Israel would need the U.S. to really beat up on Iran, and that does not seem to be the direction that the Obama administration is moving. An attack on Iran would isolate Israel and the U.S. diplomatically, and deeply fracture NATO at a time when Washington is desperately trying to keep the alliance together.

In any case, Tel Aviv and Washington are well aware that Iran does not pose an “existential” threat to Israel. Even if Iran were to build several nuclear weapons—and there is no evidence that they have any intention of doing so—it would face an Israel armed with between 100 and 200 nuclear weapons, enough to destroy Iran as a society. Even Israeli Defense Minister Ehud Barak admits Iran does not pose a threat to Israel’s existence.

If there is one thing that the bombing has accomplished, it is to thicken the walls between Israel and the rest of the Middle East. Tel Aviv is deploying anti-missile systems on its northern border and handing out gas masks in the Galilee. It is beefing up its presence in the Golan Heights, and reinforcing its border with Egypt. In the meantime, the Netanyahu administration just announced yet another round of settlement building.

Whether division and chaos, along with those walls and missiles and gas masks, will keep the surrounding anarchy at bay is altogether another matter. Bricks and bombs never produce real security.