Think There's No Alternative? Latin America Has a Few 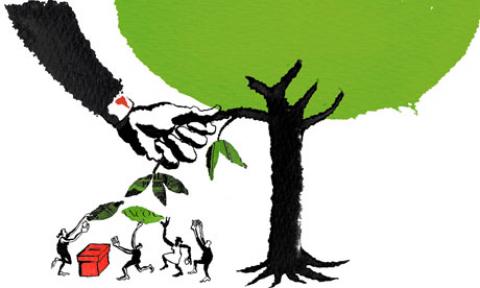 Given what's been delivered to the majority, it's hardly surprising Latin America's social -democratic and socialist -governments keep getting re-elected. , Illustration: Belle Mellor
Ever since the crash of 2008 exposed the rotten core of a failed economic model, we've been told there are no viable alternatives. As Europe sinks deeper into austerity, governing parties of whatever stripe are routinely rejected by disillusioned voters - only to be replaced by others delivering more welfare cuts, privatisation and inequality.
So what should we make of a part of the world where governments have resolutely turned their back on that model, slashed poverty and inequality, taken back industries and resources from corporate control, massively expanded public services and democratic participation - and keep getting re-elected in fiercely contested elections?
That is what has been happening in Latin America for a decade. The latest political leader to underline the trend is the radical economist Rafael Correa, re-elected as president of Ecuador at the weekend with an increased 57% share of the vote, while Correa's party won an outright majority in parliament.
But Ecuador is now part of a well-established pattern. Last October the much reviled but hugely popular Hugo Chávez, who returned home on Monday after two months of cancer treatment in Cuba, was re-elected president of Venezuela with 55% of the vote after 14 years in power in a ballot far more fraud-proof than those in Britain or the US. That followed the re-election of Bolivia's Evo Morales, Latin America's first indigenous president, in 2009; the election of Lula's nominated successor Dilma Rousseff in Brazil in 2010; and of Cristina Fernandez in Argentina in 2011.
Despite their differences, it's not hard to see why. Latin America was the first to experience the disastrous impact of neoliberal dogma and the first to revolt against it. Correa was originally elected in the wake of an economic collapse so devastating that one in 10 left the country. Since then his "citizen's revolution" has cut poverty by nearly a third and extreme poverty by 45%. Unemployment has been slashed, while social security, free health and education have been rapidly expanded - including free higher education, now a constitutional right - while outsourcing has been outlawed.
And that has been achieved not only by using Ecuador's limited oil wealth to benefit the majority, but by making corporations and the well-off pay their taxes (receipts have almost tripled in six years), raising public investment to 15% of national income, extending public ownership, tough renegotiation of oil contracts and re-regulating the banking system to support development.
Many of the things, in fact, that conventional "free market" orthodoxy insists will lead to ruin, but have instead delivered rapid growth and social progress. Correa's government has also closed the US military base at Manta (he'd reconsider, he said, if the US "let us put a military base in Miami"), expanded gay, disability and indigenous rights and adopted some of the most radical environmental policies in the world. Those include the Yasuni initiative, under which Ecuador waives its right to exploit oil in a uniquely biodiverse part of the Amazon in return for international contributions to renewable energy projects.
But what is happening in Ecuador is only part of a progressive tide that has swept Latin America, as social democratic and radical socialist governments have attacked social and racial inequality, challenged US domination and begun to create genuine regional integration and independence for the first time in 500 years. And given what's already been delivered to the majority, it's hardly surprising they keep getting re-elected.
It says more about the western media (and their elite Latin American counterparts) than governments such as Ecuador's and Venezuela's that they are routinely portrayed as dictatorial. Part of that canard is about US hostility. In the case of Ecuador, it's also been fuelled by fury at Correa's decision to give asylum to WikiLeaks founder Julian Assange, who faces sexual assault allegations in Sweden, over the threat of onward extradition to the US. In reality, the real anti-democratic menace comes from the US's own allies, who launched abortive coups against both Chávez and Correa - and successful ones in Honduras in 2009 and Paraguay last year.
Of course, Latin America's left-leaning governments have no shortage of failings, from corruption to crime. In Ecuador and elsewhere, tensions between the demands of development, the environment and indigenous rights have sharpened. And none of these experiences yet offer any kind of ready-made social or economic alternative model.
There is also a question whether the momentum of continental change can be maintained now that Chávez, who spearheaded it, is expected to stand down in the next few weeks. His anointed successor, the former trade unionist Nicolás Maduro, is in a strong position to win new elections. But neither he nor the charismatic Correa is likely to be able to match Chávez's catalytic regional role.
Latin America's transformation is nevertheless deeply rooted and popular, while a discredited right has little to offer. For the rest of the world, it makes a nonsense of the idea that five years into the crisis nothing can be done but more of the same. True, these are economies and societies at a very different stage of development, and their experiences can't simply be replicated elsewhere. But they have certainly shown there are multiple alternatives to neoliberal masochism - which win elections, too.
[Seumas Milne is a Guardian columnist and associate editor. He was the Guardian's comment editor from 2001 to 2007 after working for the paper as a general reporter and labour editor. He has reported for the Guardian from the Middle East, eastern Europe, Russia, south Asia and Latin America. He previously worked for the Economist and is the author of The Enemy Within and The Revenge of History and co-author of Beyond the Casino Economy.  Twitter: @SeumasMilne ]