The US Supreme Court's upcoming decision on the Voting Rights Act could let discriminatory laws make a comeback. 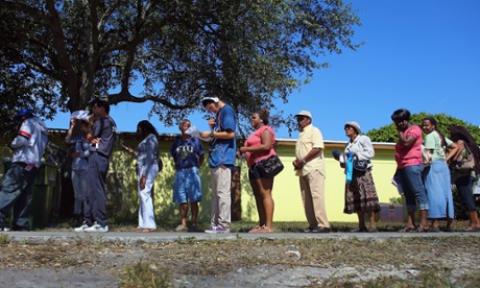 When a black man won the White House in 2008, many in the commentariat declared the United States a "post-racial" society, no longer hamstrung by old hatreds, freed at last from the embarrassments of segregation – finally and triumphantly color blind.

Conservatives have been telling themselves some version of this pretty lie ever since Robert E Lee surrendered at Appomattox. On 27 February, we'll hear it again when the supreme court takes up a challenge to the 1965 Voting Rights Act. The case, Shelby County v Holder, centers on Section 5 of the VRA, which requires that nine states with histories of discrimination (Virginia, Alabama, Mississippi, South Carolina, Louisiana, Texas, Georgia, Alaska and Arizona), and parts of seven more states must seek permission from the justice department to change election laws. The Alabama county argues that Section 5 is an unconstitutional infringement on "state sovereignty", and a relic from the bygone days of poll taxes and literacy tests.

Granted, citizens in the old Confederacy are no longer forced to say how many bubbles are in a bar of soap before they can cast a ballot. But the last national election provides plenty of examples of voter suppression. Florida (five counties of which are included in Section 5) enacted a largely inaccurate purge of its electoral rolls. The people whose right to vote was challenged were predominantly (the state says coincidentally) minorities.

The state's Republican leadership cut back the number of polling places and reduced early voting, including the Sunday before election day, when African American churches would traditionally organize trips to the polls. Many, like Desaline Victor, the 102-year-old President Obama featured in his state of the union address, had to wait in line for hours. More than 200,000 others were unable to vote.

Texas and South Carolina (entirely covered by Section 5) tried to institute absurdly restrictive voter ID laws in 2012, but the Department of Justice, citing the Voting Rights Act, shot them down. "Federal courts sided with DOJ, finding that the new rules would disproportionately affect black and Latino citizens.

Should the supreme court strike down Section 5, Texas and South Carolina (and any other state with a legislature worried about too many of the wrong sort of voters) can come right back and try again. Perhaps that's why two weeks ago, the Virginia legislature decided that bank statements, utility bills, paycheck stubs and Social Security cards, all of which were specifically approved as valid voter ID just last year, will no longer be allowed. Concealed weapons permits, however, are perfectly acceptable.

The Voting Rights Act was signed into law by President Lyndon Johnson in 1965, a few months after civil rights marchers were beaten and teargassed on the Selma to Montgomery March. The state of Alabama filed a brief in support of Shelby that says, "that was a long time ago." Congress reauthorized the VRA, however, not "a long time ago". It was in 2006. Republicans and Democrats in Congress supported it overwhelmingly: 98-0 in the Senate, 390-33 in the House. Clearly, they saw a need for it.

So why all of a sudden are conservatives hell-bent on scuppering the enforcement mechanism to the civil rights movement's crowning achievement? They cite Barack Obama's presidency, increases in minority voter registration, and African American and Latino elected officials. Philadelphia, Mississippi, the town where the Klan murdered civil rights workers James Chaney, Andrew Goodman, and Michael Schwerner in 1964, has an African American mayor. In 2009, Chief Justice John Roberts remarked blithely, "Things have changed in the South."

Blum is a visiting fellow at the conservative American Enterprise Institute and a one-man crusade against civil rights legislation. He persuaded a young white woman named Abigail Fisher to sue the University of Texas on the grounds that she was not admitted while "less qualified" minority students were, a suit the supreme court is expected to rule on later this year. Blum is also responsible for recruiting the predominantly white Shelby County, just south of Birmingham, Alabama, to take Section 5 to the high court.

Cities and counties can earn an opt-out of Section 5 if they demonstrate a clean record over a certain period of time, but Shelby County, with a troubling history of voting rights violations – 20 since 1975 – would seem to be an argument for keeping the Voting Rights Act intact, not eviscerating it. We haven't outrun the past; we're not immune to history or old prejudices.

(Diane Roberts is a writer and broadcaster. A native Floridian, she was educated at Oxford where she was a Marshall scholar. She broadcasts regularly for the BBC and National Public Radio in America, and writes for newspapers such as the Washington Post, the New York Times and the St Petersburg Times. She is also professor of literature and writing at Florida State University and the author of four books, the most recent of which is Dream State, a political history of Florida)