She is known simply as The Teacher, a union boss of such legendary influence that she was credited with putting a president in office and, until this week, so untouchable she flaunted her apparently dubious wealth with abandon. Now Elba Esther Gordillo is behind bars over the alleged embezzlement of stratospheric amounts of union funds. 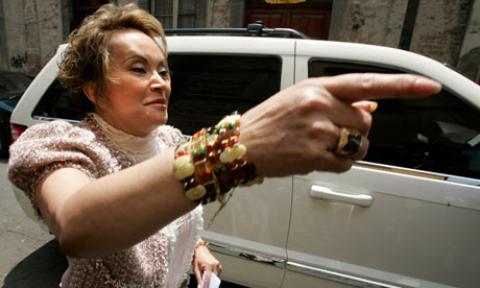 She is known simply as The Teacher, a union boss of such legendary influence that she was credited with putting a president in office and, until this week, so untouchable she flaunted her apparently dubious wealth with abandon. Now Elba Esther Gordillo is behind bars over the alleged embezzlement of stratospheric amounts of union funds.

Gordillo, leader of the 1.5 million-strong national teachers' union in Mexico, was arrested on Tuesday evening after the private jet in which she had travelled from California landed at an airport near the capital. She spent the night in a Mexico City jail before appearing in court where she was formally read the charges of "operations with resources of illicit origin" and "organised crime".

She appeared with two other detainees linked to the case and was told she was not eligible for bail. Visible only vaguely through bars separating the prison from the court, and, when asked if she had any questions, she shrugged and said: "No."

The judge in the case has an initial period of 72 hours to determine whether to indict Gordillo, although this could be extended for a further three days.

With the aid of complicated diagrams, the attorney general, Jesús Murillo, laid out a triangulation scheme in which nearly 2,000m pesos (close to £100m) was funnelled out of union bank accounts in Mexico into other accounts at home and abroad of three associates and a business, and then used to finance Gordillo's legendarily expensive tastes, from luxury homes to plastic surgery.

The money allegedly includes up to $3m (£2m) spent in the luxury US department store Neiman Marcus, and tens of thousands of dollars spent on plastic surgery in California.

The smoothness of the arrest contrasts with the drama of the fall that is being interpreted in Mexico as an assertion of authority by the incoming president, Enrique Peña Nieto, and his Institutional Revolutionary party, or PRI, returned to the power it lost in 2000 after 71 uninterrupted years at the helm.

It is also seen as a message of caution to other so-called de facto powers, ranging from feudal-style governors to television giants, who had filled the power vacuums left by the weakened presidency of the intervening 12 years.

"Peña Nieto chose [Gordillo] first, I think because of her emblematic nature, and because it is politically convenient. That's valid, but it shouldn't be limited to that," former foreign minister Jorge Castañeda told MVS radio.

One of the few public figures now prepared to admit a friendship with Gordillo, Castañeda added that the union leader's "excesses, bad taste and sometimes offensive behaviour" should not lead to the presumption of guilt.

Gordillo is an ideal target. The 68-year-old was not only mounting active opposition to a key education reform largely designed to deal with sub-standard teaching by prising the sector out of union control, but had also accumulated a battery of enemies across the political spectrum and among the intellectual and journalistic elite over her 24 years at the head of the union.

At the same time, she had become a national figure of ridicule. Her extravagant designer outfits lay uneasily with the low salaries of the teachers, and she was mercilessly mocked for her, at times rather odd, personal appearance, born of repeated plastic surgery and chronic illness.

The Teacher's near mythical reputation for subterfuge also provided fantastic stories, including the claim that she once held off an imminent attempt to depose her in the late 1990s with the help of a witchcraft ceremony up a Nigerian mountain in which she was clothed with the pelt of a white lion that had been skinned alive.

In her most recent interview, earlier this month, a television news anchor usually known for her soft interviews asked her how she felt about being "the most hated woman in Mexico". Gordillo responded: "Nobody is more loved by their own."

The union did not immediately respond to the arrest of the woman named its leader-for-life several years ago. While she has always had to face dissidence, Gordillo maintained support through adept negotiations of above-average improvements in wages and conditions for teachers.

She also kept a tight hold on the leadership in ways that reputedly ranged from a network of female spies charged with seducing collaborators she suspected of disloyalty, to extravagant gifts. During a conference in 2008, she distributed a fleet of hummers to regional bosses.

Gordillo was made head of the union in 1989 by then president Carlos Salinas, at a time when her predecessor and former mentor was struggling to control a wave of dissidence after 17 years in the job. She struggled through the next administration headed by President Zedillo, but came into her own in the weaker governments of the post-PRI period.

Gordillo became a personal friend and trusted adviser of Vicente Fox of the National Action party, or PAN, after he became president in 2000. At the same time she cemented her independent political power base with the creation of the New Alliance party, or Panal, which is credited by many with helping Felipe Calderón, also of PAN, win a wafer-thin victory in the 2006 presidential elections. This allowed her to negotiate further quotas of power during his administration.

With the 2012 elections on the horizon, Gordillo's party negotiated an alliance with the PRI, but when that broke down many predicted her days were numbered. The voices of doom got louder when Peña Nieto kicked off his administration with an education reform proposal. Gordillo was arrested a day after the president signed the reform into law.

Few analysts take seriously the repeated official denials that politics played any part in the decision to go after Gordillo, who clearly suspected something was brewing herself, if not exactly what.

At a speech delivered on her 68th birthday earlier this month, she said: "I want to die with the epitaph: Here lies a warrior. She died like a warrior."

Mexican authorities are investigating the alleged embezzlement of 1,978m pesos ($154m at today's exchange rate) of union funds by Elba Esther Gordillo and close associates between 2008 and early 2012. It claims to have incontrovertible evidence linking the cash to:

• $3m in numerous transfers to the luxury US department store Neiman Marcus.

• $2m transferred to bank accounts in Switzerland and Liechtenstein in the name of a company 99% owned by Gordillo's mother. The company bought two properties with the money in California.

• $1.4m in transfers to a private jet company called Ademex.