The Uncommon Courage of Bradley Manning

Bradley Manning's actions are not unlike those of Daniel Ellsberg, whose release of the Pentagon Papers helped to expose the government’s lies and end the Vietnam War. 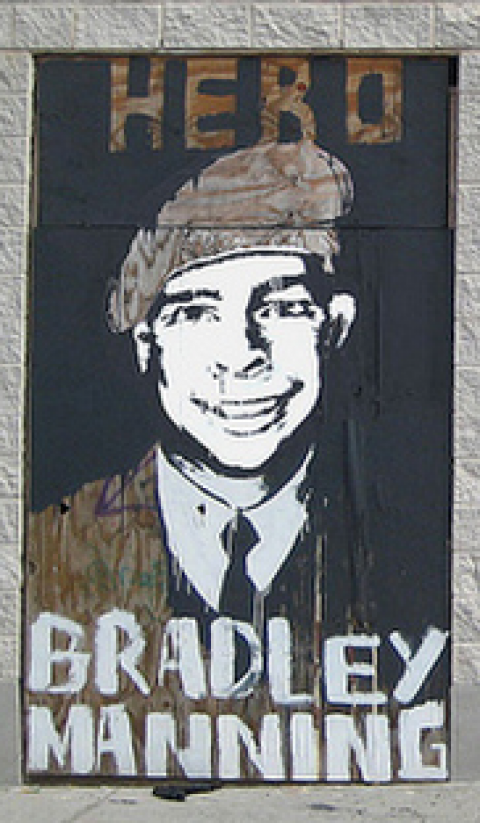 ,
Bradley Manning has pleaded guilty to 10 charges including possessing and willfully communicating to an unauthorized person all the main elements of the WikiLeaks disclosure. The charges carry a total of 20 years in prison. For the first time, Bradley spoke publicly about what he did and why. His actions, now confirmed by his own words, reveal Bradley to be a very brave young man.
When he was 22 years old, Pfc. Bradley Manning gave classified documents to WikiLeaks. They included the “Collateral Murder” video, which depicts U.S. forces in an Apache helicopter killing 12 unarmed civilians, including two Reuters journalists, and wounding two children.
“I believed if the public, particularly the American public, could see this it could spark a debate on the military and our foreign policy in general as it applied to Iraq and Afghanistan,” Bradley told the military tribunal during his guilty plea proceeding. “It might cause society to reconsider the need to engage in counter terrorism while ignoring the human situation of the people we engaged with every day.”
Bradley said he was frustrated by his inability to convince his chain of command to investigate the Collateral Murder video and other “war porn” documented in the files he provided to WikiLeaks. “I was disturbed by the response to injured children.” Bradley was bothered by the soldiers depicted in the video who “seemed to not value human life by referring to [their targets] as ‘dead bastards.’” People trying to rescue the wounded were also fired upon and killed. A U.S. tank drove over one body, cutting the man in half. The actions of American soldiers shown in that video amount to war crimes under the Geneva Conventions, which prohibit targeting civilians, preventing the rescue of the wounded, and defacing dead bodies.
No one at WikiLeaks asked or encouraged Bradley to give them the documents, Bradley said. “No one associated with the WLO [WikiLeaks Organization] pressured me to give them more information. The decision to give documents to WikiLeaks [was] mine alone.”
Before contacting WikiLeaks, Bradley tried to interest the *Washington Post*in publishing the documents but the newspaper was unresponsive. He tried unsuccessfully to contact the *New York Times.*
During his first nine months in custody, Bradley was kept in solitary confinement, which is considered torture as it can lead to hallucinations, catatonia and suicide.
Bradley maintained his not guilty pleas to 12 additional charges, including aiding the enemy and espionage, for which he could get life imprisonment.
Bradley’s actions are not unlike those of Daniel Ellsberg, whose release of the Pentagon Papers helped to expose the government’s lies and end the Vietnam War.
Marjorie Cohn is a professor at Thomas Jefferson School of Law and co-author of “Rules of Disengagement: The Politics and Honor of Military Dissent” (with Kathleen Gilberd). She testifies at military hearings about the illegality of the wars, the duty to obey lawful orders, and the duty to disobey unlawful orders. See www.marjoriecohn.com.*
Subscribe to Portside