Daring For Democracy: How The Suffragists Upstaged Woodrow Wilson In Washington

The movement for women’s suffrage had begun in 1848 in Seneca Falls, but the suffrage parade of 1913 was undoubtedly its turning point. Feminists today face many daunting challenges, but it’s inspiring to recognize that at a time when our foremothers confronted even more formidable obstacles, they responded with great courage, ingenuity, and even joy. One hundred years later, their example still burns bright. 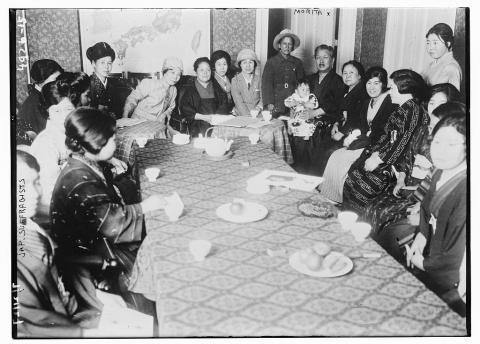 On March 3, 1913, President-elect Woodrow Wilson arrived at Union Station in Washington, DC. It was the day before his inauguration, but the teeming mobs that typically appeared to greet a new president were nowhere to be found. Instead, the streets of Washington seemed deserted. A disappointed Wilson asked, “Where are all the people?” “Over on the Avenue watching the suffrage parade,” he was told.

Upstaging a president is no easy feat. But then, few Americans had ever witnessed so electrifying a spectacle as the suffragist parade that was then marching its way up Pennsylvania Avenue — and into the history books. The parade was brilliant political pageantry, as well as a deeply subversive act. Historian Christine Stansell has noted that in the early 20th century, for a woman to “expos[e] oneself to the public eye” was “in itself a transgression,” something akin to prostitution. And on that cold, sunny day in March, over 5,000 women came together to boldly stake a claim not only to public space, but to American democracy itself.

Their action came not a moment too soon. In the years leading up to the march, the suffrage movement had been on life support. No suffrage legislation had passed in years, and supporters were deeply frustrated. But change was in the air. A new wave of suffragists was challenging the older generation of doughty Victorian matrons who had long dominated the movement. These New Women were passionate, insouciant, and daring. Many of them had been influenced by the radical ideas of British suffragist Emmeline Pankhurst.

One of Pankhurst’s acolytes was a young American named Alice Paul, who had traveled to England to study but soon became swept up in suffrage activism there. In 1910, the 25-year-old Paul returned to the United States, eager to shake up the decorous American suffrage movement with some Pankhurst-style militancy.

In short order, Paul got herself appointed as the new chair of the long-dormant Congressional Committee of the National American Women’s Suffrage Association and began to organize a massive suffrage parade scheduled for the day before the inauguration. Her timing was no accident. Paul sought to revive the women’s suffrage amendment, and she knew that if the parade took place on that date, it would have a captive audience.  She also hoped to send a message to Congress and the new president about the growing political power of the suffrage movement.

Nationwide, enthusiasm about the planned parade ran high. Paul issued a steady stream of press releases, and newspapers eagerly covered the parade-related activities of local suffrage organizations. A newsreel that is said to be America’s oldest captured a group of New York women traveling to the parade.

Alice Paul was a woman of many gifts. Among them was her remarkable eye for visual spectacle. Paul was determined, as one historian put it, to “make suffrage visible,“ and she took immense care in orchestrating the parade’s pageantry.  Every color in the rainbow was to be used, and organizers assigned thematic colors for each group of paraders.

Leading the parade was the beautiful suffragist Inez Mulholland, arrayed in a dazzling white gown and riding a white horse. The diverse group of marchers included women laborers and professionals, immigrants, male supporters of suffrage, and a delegation of African-American women from Howard University. (The organizers, fearing that Southern participants would object, had initially tried to exclude the latter group, but relented after facing protests). The parade also included marching bands, mounted brigades, heralds, an elaborate allegorical tableau representing “progress,” and numerous floats.

Over half a million people poured out onto the capital’s streets to witness the parade. Quickly, things became dangerous. Hostile spectators inflicted verbal and physical harassment on the marchers, while the Washington police failed to restore order. Over 200 marchers were treated in local hospitals for injuries; fortunately, none were serious.

The next day, the parade made national headlines. The New York Times described the pageant as “one of the most impressively beautiful spectacles ever staged in this country.” Along with its praise for the marchers, the press heaped contempt on the violent spectators, and outrage on the authorities who had failed to keep public order. Contributions and new volunteers poured in to the Congressional Campaign.

But a new day for women had not dawned just yet; President Wilson, alas, refused to budge on the suffrage issue. In the end, it would take a combination of the increasingly radical tactics of Alice Paul and her followers, the more traditional modes of politicking practiced by the establishment suffragists, and the complex effects of a world war before the tide was finally turned. Women were not guaranteed the right to vote until the passage of the Nineteenth Amendment in 1920.

The movement for women’s suffrage had begun in 1848 in Seneca Falls, but the suffrage parade of 1913 was undoubtedly its turning point. There are some intriguing parallels between the suffragists of 1913 and feminists today. By about 1910, it looked as though the suffrage movement had ground to a halt, and today one might say the same about modern-day feminism. Stephanie Coontz recently wrote a much-discussed New York Times op-ed lamenting the fact that gender equality in America seems to have stalled. The last major piece of legislation that advanced women’s rights, the Family and Medical Leave Act, was enacted a full two decades ago. Women’s progress in the workplace has slowed, reproductive rights are under siege, and pop culture misogyny (see: Seth MacFarlane at the Oscars) abounds.

But 100 years ago, when women were far less powerful than they are today, they found brilliantly creative ways to fight back. Like today’s Slutwalkers, they made feminist action look irreverent, festive, and fun. Like today’s burgeoning feminist internet culture, they ingeniously deployed new media to advance women. And just as the nasty attacks on Planned Parenthood and Sandra Fluke created a powerful pro-woman backlash, the ugly behavior of anti-suffrage rioters at the 1913 parade fueled public outrage that ultimately strengthened the suffrage cause.

Feminists today face many daunting challenges, but it’s inspiring to recognize that at a time when our foremothers confronted even more formidable obstacles, they responded with great courage, ingenuity, and even joy. One hundred years later, their example still burns bright.