No, the United States Will Never, Ever Turn Into Greece

There isn't any evidence that the U.S., or other countries that borrow in currencies they control, face some debt tipping point after which borrowing costs spiral out of control. There isn't even much evidence this is true of Europe's troubled economies. Borrowing costs fell for the PIIGS in 2012 (one year after Greenlaw & Co.'s sample ended), not because those countries reduced their debt burdens, but because the ECB promised to do "whatever it takes" to save the euro. 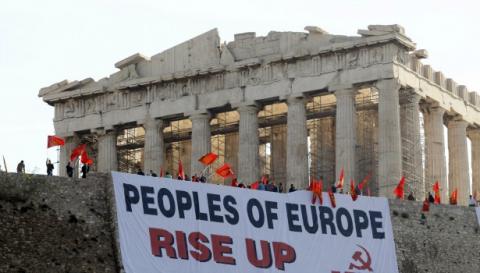 There is no evidence that countries like the United States face debt tipping points. The Greek people aren't taking it lying down either, Reuters
Have you read the opinion section of any newspaper in the last three years? Yes? Then there is a better-than-even chance you have come across some impressive-sounding analyst predict that the United States is "turning into Greece."

Maybe it's been a while, so we'll recap. The short version of this story is that we'll spend ourselves into bankruptcy. The longer version says that too much public debt makes markets nervous. Nervous markets demand higher interest rates. Higher rates mean higher deficits and lower growth, both of which mean more burdensome debt. More burdensome debt makes markets even more nervous. And around and around we go in a vicious circle into insolvency.

As far as scare stories go, this is pretty damn scary. It's also just a story. Rates haven't risen as debt has the last few years; they have fallen to historic lows. Of course, that hasn't stopped the Greek chorus from predicting that the economy is going to Hades. But when? Is it when debt reaches 100 percent of GDP? Or 90 percent, as Carmen Reinhart and Kenneth Rogoff famously argued?

That was the bright white line drawn in a recent paper by David Greenlaw, James Hamilton, Peter Hooper and Frederic Mishkin. Greenlaw & Co. ran regressions on 20 advanced economies from 2000 to 2011 to see if there's a relationship between a country's borrowing costs one year and its gross debt, net debt, and 5-year current account average the previous one. (Glossary Interlude: Gross debt refers to the total amount of debt, including debt the government owes to itself. Net debt is the amount held by the public, minus any government assets. Current account is the balance of trade, which includes both net exports and net income on foreign investments).

This is a big deal. It's not that this regression equation has much predictive power (the authors admit it doesn't) or that the above 4.5 basis points are all that scary; it's the claim that there's a statistically significant relationship between debt and rates. After all, if Greenlaw & Co. are right about debt tipping points, then we are, technically-speaking, screwed. Our gross debt to GDP is already at 102 percent -- enough to send our borrowing costs soaring, as they predict below.
If they are right.

They almost certainly are not.

[Things are about to get very wonky below, so my editor forced me to sum up things here. The two main conclusions are: (1) For countries that can borrow in their own currency, like the U.S., higher debt doesn't clearly lead to higher interest rates. (2) For countries that don't control their currencies, like Greece, it's borrowing too much from foreigners (NOT borrowing too much in general) that clearly leads to much higher borrowing costs. Okay, forward with the wonkiness... ]

Not all debt is created equal. Countries that borrow in a currency they control play under a different set of rules. They can never run out of money to pay back what they owe, since they can always print what they need as a last resort. That's not to say they actually do or should turn to the printing-press to finance themselves. But the option to do so calms markets. After all, inflation is a lot less bad than default for creditors. That's why it's no so easy for countries that don't borrow in a currency they control. They can default. And this is a case where thinking can make things so. Indeed, as Paul De Grauwe points out, countries that don't have their own central bank, like euro members, can fall victim to self-fulfilling panics that push them into bankruptcy. In other words, markets force up interest rates because they fear default -- which then pushes them into default. It's a bank-run on a country.

So we have to answer one big question. How much of Greenlaw & Co.'s results are driven by euro countries that have completely different debt dynamics than non-euro countries?

Well, as Paul Krugman points out, 12 of the 20 countries they look at are either part of the euro, or, in Denmark's case, pegged to it. The remaining ones show no signs of anything resembling debt tipping points. Often the reverse. That's simple enough to see if we break up their sample. The chart below looks at the pre-crisis years from their sample, and shows the non-euro countries in red, the core-euro countries in green, and the (later) troubled PIIGS countries in blue. Back then, at least, there wasn't any difference between -- except for Japan, which had far more debt, and far lower borrowing costs. Nor was there much of any discernible relationship between debt and interest rates.

But then Lehman failed, and the world changed. Debt went up and borrowing costs came down -- except for the PIIGS.

I decided to go back and see what kind of results I'd get if I looked at the non-euro countries and PIIGS separately. I started by trying to recreate the Greenlaw & Co. result for the entire 20-country sample over the 12 years -- which I was able to do, with some very slight differences due to slightly different data sources. (I couldn't find IMF data on long-term interest rates for every country, so I used OECD data to fill in the blanks). Next, I ran a regression with country and time-fixed effects on the non-euro countries -- Australia, Canada, Japan, Norway, Sweden, Switzerland, the U.K., and the U.S. -- from 2000 to 2011. I got coefficients of .00743, .00575, and -0.0695 for gross debt, net debt, and current account, respectively. None of them were statistically significant at the 95 percent level. (The P>t values were 0.13, 0.18, and 0.087).

To translate from stats-speak: our equation for non-euro countries tells us increasing debt by 1 percentage point of GDP only increases borrowing costs by 1.3 basis points. And that result isn't even statistically significant. In other words, there is no evidence of a debt tipping point for countries that borrow in money they can print.

But what about Europe's troubled economies? The Greenlaw & Co. results should hold up there, if nowhere else, right? Well, kind of. I ran another regression with country and time fixed effects on the PIIGS -- Portugal, Italy, Ireland, Greece, and Spain -- from 2000 to 2011, and I got coefficients of 0.0605, 0.0209, and -.8952 for gross debt, net debt, and current account. The coefficients for gross debt and the current account were statistically significant (the latter highly so), but not for net debt, since the PIIGS mostly have the same amount of gross and net debt. (The P>t values were 0.046, 0.342, and 0). I went back and ran the regression again, this time without net debt, and got coefficients of 0.0843 and -0.9157 for gross debt and the current account. Both were highly significant. (The P>t values were 0 for both).

***
Beware economists bearing regressions -- and journalists too. My sample sizes here are so ridiculously small that the results are hardly dispositive. So don't pay attention to the evidence. Pay attention to the lack of evidence.
There isn't any evidence that the U.S., or other countries that borrow in currencies they control, face some debt tipping point after which borrowing costs spiral out of control. There isn't even much evidence this is true of Europe's troubled economies. Borrowing costs fell for the PIIGS in 2012 (one year after Greenlaw & Co.'s sample ended), not because those countries reduced their debt burdens, but because the ECB promised to do "whatever it takes" to save the euro. A monetary backstop matters more than the amount of debt. Reducing debt isn't as empirically urgent as we hear.
Our Greek chorus are more Chicken Littles than Cassandras.