Focus on jobs and restarting the economy, not deficits and cuts to social programs. 'A reminder that we don't need to cut teachers and school lunches when we can eliminate wasteful giveaways to fossil fuel corporations.' 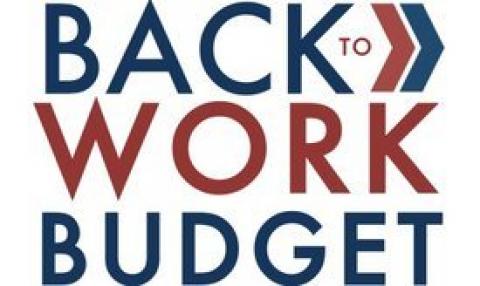 Congressional Progressive Caucus - Back to Work Budget,
Congressional Progressive Caucus Introduces Anti-Austerity Back-to-Work Budget
Focus on jobs and restarting the economy, not deficits and cuts to social programs
March 14, 2013
U.S. Labor Against the War
CPC has plan to put America back to work
On Wednesday, March 13th, Rep. Paul Ryan submitted the GOP budget to the House Budget Committee. The Democratic Party leadership will submit an official Democratic alternative.
The GOP budget is "all austerity, all the time".  It protects the wealthy and corporate elites, shifting all of the burden onto the backs of working people and the poor.
The official Democratic Party alternative would close some loopholes to compel some of the very rich and biggest corporations to pay a bit more, but it still accepts the idea that the most urgent problem is the deficit rather than creating jobs to put the country back to work. The White House and top Democratic Party leaders seem open to cuts to such basic safety net programs as Social Security and Medicare using "chained CPI" in the name of "entitlement reform." [Even though Social Security is self-funded and adds nothing to the deficit.]
Enter the Congressional Progressive Caucus
Today the CPC released its "Back to Work" Anti-Austerity Budget - a clear alternative to the GOP and official Democratic Party austerity plans.
Here are some highlights of the Back to Work Budget:
It will create 7 million jobs in the first year, bring in revenue by closing tax loopholes for corporations and the rich, impose a transaction tax on securities speculation and a carbon tax, end subsidies to Big Oil & Coal and Agribusiness, preserve services people depend on for survival, and balance the budget.  It will reduce the deficit by $4.4 trillion over ten years.
It invests in rebuilding and replacing public infrastructure.  It calls for the federal government to put people back to work if the private sector fails to do so (like the WPA did in the 1930s).  It increases aid to states and communities so that laid off teachers, fire fighters, police and other public employees can be rehired.  It closes tax loopholes that have subsidized the corporate export of jobs.  It reinstates the extension of unemployment benefits for 99 weeks.  If fully implemented, it is expected to reduce unemployment to below 5% within three years.
It allows the government to negotiate prescription drug prices and makes no cuts to Medicare or Medicaid.  [It doesn't even mention Social Security because Social Security isn't a cause of the deficit.  It has its own funding from payroll taxes and is not part of the discretionary budget.]
It follows the basic outlines of last year's "Budget for All" in cutting the bloated Pentagon budget by $897 billion over ten years by implementing proposals made in the Report of the Project on Defense Alternatives. It will end the Afghanistan war, close unnecessary foreign bases, reduce the stockpile of nuclear weapons, and cut wasteful boondoggles like the F-35 and the V-22 Osprey.

This reduction is an important step in the right direction, but smaller than many believe is needed.  The truth is that the U.S. military budget could be cut in half and the U.S. would still spend more than the next four largest military spenders - China, Russian, UK and France!  This cut should be considered a "down payment".

The Back to Work Budget is a solid, well researched alternative to the irresponsible budget advocated by Paul Ryan and the House Republicans, and the weak compromises some Democrats seem prepared to make.  It cuts things we don't need to fund the things we do.
The Back to Work Budget provides a broad progressive agenda that reflects the budget priorities and values of a large majority of people of all political persuasions who know --
We can't get to Prosperity Street by taking the Austerity Road.
The Back to Work Budget was unveiled today (3/13) and will be submitted to the House Budget Committee next week as a substitute for the Ryan/GOP Slash & Burn Budget.  A vote on it will likely be taken within a week after that.  That provides a very small window of opportunity in which to build support for it.
HERE'S WHAT YOU CAN DO
The Congressional switchboard number is:(202) 224-3121
A toll-free line is: (866) 338-1015
Resources:
Progressive 'Back to Work' Budget Wins Praise for Anti-Austerity Approach
'A reminder that we don't need to cut teachers and school lunches when we can eliminate wasteful giveaways to fossil fuel corporations.'
Jon Queally, staff writer
March 14, 2013
Common Dreams
In the midst of ongoing hysteria about a 'non-existent deficit crisis' in Washington, the Congressional Progressive Caucus on Wednesday unveiled an alternative approach to destructive austerity economics by releasing their 'Back to Work Budget' plan for 2014.
Pushing back specifically on the dominant talking point of inside-the-Beltway elites, the budget challenges the idea that cutting programs, reducing corporate tax rates, and slashing investments is a pathway to economic prosperity. Its proponents argue the US does not have "a deficit crisis" - as those pushing for steep cuts suggest - but rather, "a jobs crisis."
Presented by CPC co-chairs Reps. Raúl M. Grijalva and Keith Ellison and backed by members of the caucus' Budget Task force - Reps. Jim McDermott, Jan Schakowsky, Barbara Lee and Mark Pocan - the plan describes how smart investments, not deep cuts to key programs, would create almost 7 million jobs over the first year of its implementation.
"Americans face a choice," Grijalva and Ellison said. "We can either cut Medicare benefits to pay for more tax breaks for millionaires and billionaires, or we can close outdated tax loopholes and invest in jobs. We choose investment."
They continue:

The Back to Work Budget invests in America's future because the best way to reduce our long-term deficit is to put America back to work. In the first year alone, we create nearly 7 million American jobs and increase GDP by 5.7%. We reduce unemployment to near 5% in three years with a jobs plan that includes repairing our nation's roads and bridges, and putting the teachers, cops and firefighters who have borne the brunt of our economic downturn back to work. We reduce the deficit by $4.4 trillion by closing tax loopholes and asking the wealthy to pay a fair share. We repeal the arbitrary sequester and the Budget Control Act that are damaging the economy, and strengthen Medicare and Medicaid, which provide high quality, low-cost medical coverage to millions of Americans when they need it most. This is what the country voted for in November. It's time we side with America's middle class and invest in their future.

Received as a breath of fresh air of economic sanity, the plan was praised by a variety of individuals and groups.
"If you listen to the budget debate in Washington too long, you almost start to believe that austerity is inevitable, and that the only choice left is how to allocate the suffering," said Ben Schreiber, a policy analyst for Friends of the Earth. "It is refreshing that the House Progressive Caucus has come up with a positive vision for moving the country forward. It serves as a reminder that we don't need to cut teachers and school lunches when we can eliminate wasteful giveaways to fossil fuel corporations."
Schreiber specifically welcomed inclusion of a carbon tax on fossil fuels and compared it to the woefully inadequate and industry-friendly approach laid out in the GOP budget presented by Rep. Paul Ryan on Monday. "The Back to Work Budget would allow us to make polluters pay for the damage they are causing, while using the revenue to invest in the clean energy technologies of the future - rather than continuing our addiction to dirty energy, as proposed in the Ryan plan yesterday," he said.
"Financial speculation taxes can raise substantial revenue to counteract devastating spending cuts," said Micah Hauptman of Public Citizen. "The automatic, across-the-board "sequestration" cuts began to take effect two weeks ago. And while most people have not experienced the disastrous consequences of these cuts, it is likely that they will shortly, as funding to emergency response and disaster relief programs are slashed, food inspections are reduced and public safety is compromised."
Writing at In These Times, Ian Becker assessed the budget's approach by writing:

With corporate profits already back up to record highs  http://www.nytimes.com/2013/03/04/business/economy/corporate-profits-so… , the budget's strategy of public investing and corporate belt-tightening--for instance, modernizing 35,000 public schools rather than providing a $25 billion stock option loophole for Wall Street--don't seem bold, so much as commonsensical.

Key aspects of the budget proposal include:
Job Creation
Fair Individual Tax
Fair Corporate Tax
Defense
Health Care
Environment
So far and according to Dave Johnson and Bill Scher at the Campaign for America's Future, the most troubling aspect of the 'Back to Work Budget' is the absolute poverty of the media coverage surrounding it.
Writing ahead of the budget's release, Scher wrote:
For the past 24 hours, the media has dutifully reported on the budget proposal from Rep. Paul Ryan, even though everyone knows it is extremely unlikely to become law.
That's fine; it's not the media's job to short-circuit debate. It's the media's job to report factually on the ideas proposed in Congress, so the public can weigh in before Congress votes.
Today, another budget will be proposed by the Congressional Progressive Caucus, the "Back to Work" budget. It probably won't become law either. But it deserves every bit of media attention that Ryan's budget gets.
But as the day followed and Johnson tracked coverage via web news searches, what did he find? As expected: Nothing. Or almost nothing. As of his writing he'd found 72,000 hits looking for stories on "Paul Ryan Budget," but searching  for "Back to Work Budget" only two - one from Huffington Post and one from Raw Story.
It's safe to say a search Thursday will yield better results. But for the moment, austerity remains the mainstream media's darling.
Read the budget's executive summary here (pdf)
Enjoy this infographic:

Watch Rep. Keith Ellison introduce the budget here:
[OurFuture.org interviews Rep. Keith Ellison, D-Minn., co-chair of the Congressional Progressive Caucus, on the Back to Work Budget, a federal spending proposal that focuses on job creation as the way to restore the economy and address federal deficit concerns in the context of a healthier middle-class economy. It contrasts sharply with the Republican-backed budget proposal released the day earlier by Rep. Paul Ryan, R-Wis., the House Budget Committee chairman, which promotes drastic cuts in federal spending and lowers taxes on the wealthiest Americans.]