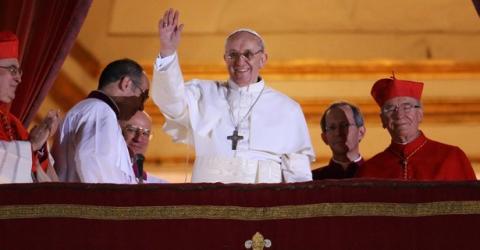 Pope Francis I waves to an eager crowd from St. Peter's Basilica after being elected the 266th Pontiff. Caught up in the hype, American news outlets are forgetting to ask critical questions about the new pope., In These Times / Peter Macdiarmid/Getty Images

Damning interview was released hours before Papal election
By Patrick Counihan, IrishCentral Staff Writer
March 14, 2013
IrishCentral.com
Critics of new Pope Francis have claimed that he maintained his silence as Argentina's brutal military dictatorship raged a dirty war against left wing activists.
Some critics have pointed to his failure and the failure of his church to expose human rights violation at the height of military rule.
The claims were made in the wake of the publication of an interview with Argentina's former military dictator Jorge Videla.
The interview, conducted in 2010, were only published on Sunday, hours before Archbishop of Buenos Aires Jorge Mario Bergoglio was elected Pope in Rome.
In the interview, Videla claims that he kept Argentina's Catholic hierarchy informed about his regime's policy of `disappearing' political opponents.
He also told El Sur magazine that the country's Catholic leaders, including the new Pope claim his critics, offered advice on how to `manage' the policy.
Videla said he had `many conversations with Argentina's then primate Cardinal Primatesta, about his regime's dirty war against left-wing activists.
He claimed there were also conversations with other leading bishops from Argentina's Episcopal conference as well as with the country's papal nuncio at the time, Pio Laghi.
Videla said: "They advised us about the manner in which to deal with the situation.
"In certain cases church authorities offered their good offices and undertook to inform families looking for disappeared relatives to desist from their searches, but only if they were certain the families would not use the information to denounce the junta.
"In the case of families that it was certain would not make political use of the information, they told them not to look any more for their child because he was dead."
Videla added: "The church understood well and also assumed the risks of such involvement." Critics say the Videla confession confirms long-held suspicions that Argentina's Catholic hierarchy collaborated with the military's so-called process of national reorganisation, which sought to root out communism.
Thousands of left-wing activists were swept up into secret detention centres where they were tortured and murdered after the Videla led coup in 1976.
The interview claims military chaplains were assigned as spiritual advisers to the junior officers who staffed the centres.
The Argentinean church's actions were in stark contrast to the Catholic hierarchy in Brazil, where church leaders denounced that country's military dictatorship and provided sanctuary to its victims.
Argentinean bishops were prominent defenders of the regime against accusations of human rights abuses from abroad.
The report says that at the height of the state's offensive, Cardinal Primatesta refused to meet with mothers of the disappeared.
It claims he also prohibited the lower clergy from speaking out against state violence, even as death squads targeted Catholic priests critical of the regime.
[IrishCentral.com is the largest Irish American media site. It was launched in March 2009 in New York. It serves over 1.4 million unique visitors a month, with 70,000 e-newsletter subscribers]
`Dirty War' Questions for the New Pope
The U.S. "news" networks bubbled with excitement over the selection of Argentine Cardinal Jorge Bergoglio to be Pope Francis I. But there was silence on the obvious question that should be asked about any senior cleric from Argentina: What was Bergoglio doing during the "dirty war."
By Robert Parry
March 14, 2013 - updated version
Consortiumnews.com
If one wonders if the U.S. press corps has learned anything in the decade since the Iraq War - i.e. the need to ask tough question and show honest skepticism - it would appear from the early coverage of the election of Pope Francis I that U.S. journalists haven't changed at all, even at "liberal" outlets like MSNBC.
The first question that a real reporter should ask about an Argentine cleric who lived through the years of grotesque repression, known as the "dirty war," is, "What did this person do? Did he stand up to the murderers and torturers, or did he go with the flow?" If the likes of Chris Matthews and other commentators on MSNBC had done a simple Google search, they would have found out enough about Cardinal Jorge Bergoglio to slow their bubbling enthusiasm.
Bergoglio, now the new Pope Francis I, has been identified publicly as an ally of Argentine's repressive leaders during the dirty war when some 30,000 people "disappeared" or were killed, many stripped naked, chained together, flown out over the River Plate or the Atlantic Ocean and pushed, sausage-like, out of planes to drown.
The "disappeared" included women who were pregnant at the time of their arrest. In some bizarre nod to Catholic theology, they were kept alive only long enough to give birth before they were murdered and their babies were farmed out to military families, including to people directly involved in the murder of the babies' mothers.
Instead of happy talk about how Bergoglio seems so humble and how he seems so sympathetic to the poor, there might have been a question or two from the press about what he did to stop the brutal repression of poor people and activists who represented the interests of the poor, including "liberation theology" priests and nuns, during the dirty war.
Here, for instance, is an easily retrievable story from Guardian columnist Hugh O'Shaughnessy from 2011, which states:

"To the judicious and fair-minded outsider it has been clear for years that the upper reaches of the Argentine church contained many `lost sheep in the wilderness', men who had communed and supported the unspeakably brutal Western-supported military dictatorship which seized power in that country in 1976 and battened on it for years.
"Not only did the generals slaughter thousands unjustly, often dropping them out of aeroplanes over the River Plate and selling off their orphan children to the highest bidder, they also murdered at least two bishops and many priests. Yet even the execution of other men of the cloth did nothing to shake the support of senior clerics, including representatives of the Holy See, for the criminality of their leader General Jorge Rafael Videla and his minions.
"As it happens, in the week before Christmas [2010] in the city of Córdoba Videla and some of his military and police cohorts were convicted by their country's courts of the murder of 31 people between April and October 1976, a small fraction of the killings they were responsible for. The convictions brought life sentences for some of the military.
"These were not to be served, as has often been the case in Argentina and neighbouring Chile, in comfy armed forces retirement homes but in common prisons. Unsurprisingly there was dancing in the city's streets when the judge announced the sentences.
"What one did not hear from any senior member of the Argentine hierarchy was any expression of regret for the church's collaboration...in these crimes. The extent of the church's complicity in the dark deeds was excellently set out by Horacio Verbitsky, one of Argentina's most notable journalists, in his book El Silencio (Silence)," which alleges Bergoglio's complicity in human right abuses."

The Guardian article also stated: "The most shaming thing for the church is that in such circumstances Bergoglio's name was allowed to go forward in the ballot to chose the successor of John Paul II. What scandal would not have ensued if the first pope ever to be elected from the continent of America had been revealed as an accessory to murder and false imprisonment.
"One would have thought that the Argentine bishops would have seized the opportunity to call for pardon for themselves and put on sackcloth and ashes as the sentences were announced in Córdoba but that has not so far happened....Cardinal Bergoglio has plenty of time to be measured for a suit of sackcloth - perhaps tailored in a suitable clerical grey."
Now, instead of just putting forward Bergoglio's name as a candidate for Pope, the College of Cardinals has actually elected him. Perhaps the happy-talking correspondents from the U.S. news media will see no choice but to join in the cover-up of what Pope Francis did during the dirty war. Otherwise, they might offend some people in power and put their careers in jeopardy.
In contrast to the super-upbeat tone of American TV coverage, the New York Times did publish a front-page analysis on the Pope's conservatism, citing his "vigorous" opposition to abortion, gay marriage and the ordination of women. The Times article by Emily Schmall and Larry Rohter then added:

"He was less energetic, however, when it came to standing up to Argentina's military dictatorship during the 1970s as the country was consumed by a conflict between right and left that became known as the Dirty War. He has been accused of knowing about abuses and failing to do enough to stop them while as many as 30,000 people were disappeared, tortured or killed by the dictatorship."