Ten years ago, in March of 2003, Iraqis braced themselves for the anticipated "Shock and Awe" attacks that the U.S. was planning to launch against them. 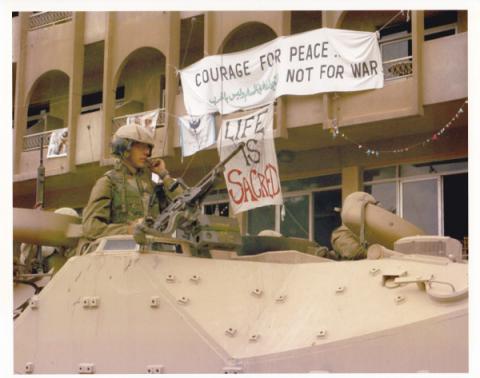 Ten years ago, in March of 2003, Iraqis braced themselves for the anticipated "Shock and Awe" attacks that the U.S. was planning to launch against them.  The media buildup for the attack assured Iraqis that barbarous assaults were looming. I was living in Baghdad at the time, along with other Voices in the Wilderness activists determined to remain in Iraq, come what may.  We didn't want U.S. - led military and economic war to sever bonds that had grown between ourselves and Iraqis who had befriended us over the past seven years.  Since 1996, we had traveled to Iraq numerous times, carrying medicines for children and families there, in open violation of the economic sanctions which directly targeted the most vulnerable people in Iraqi society, - the poor, the elderly, and the children. I still feel haunted by children and their heartbroken mothers and fathers whom we met in Iraqi hospitals.

"I think I understand," murmured my friend Martin Thomas, a nurse from the U.K., as he sat in a pediatric ward in a Baghdad hospital in 1997, trying to comprehend the horrifying reality. "It's a death row for infants."  Nearly all of the children were condemned to death, some after many days of writhing in pain on bloodstained mats, without pain relievers. Some died quickly, wasted by water-borne diseases. As the fluids ran out of their bodies, they appeared like withered, spoiled fruits. They could have lived, certainly should have lived - and laughed and danced, and run and played- but instead they were brutally and lethally punished by economic sanctions supposedly intended to punish a dictatorship over which civilians had no control.

The war ended for those children, but it has never ended for survivors who carry memories of them.

Likewise, the effects of the U.S. bombings continue, immeasurably and indefensibly.

Upon arrival in Baghdad, we would always head to the Al Fanar hotel which had housed scores of previous delegations. Often, internationals like us were the hotel's only clients during the long years when economic sanctions choked Iraq's economy and erased their infrastructure.  But in early March of 2003, rooms were filling quickly at the Al Fanar. The owner invited his family members and some of his neighbors and their children to move in, perhaps hoping that the U.S. wouldn't attack a residence known to house internationals.

Parents in Iraq name themselves after their oldest child. Abu Miladah, the father of two small girls, Miladah and Zainab, was the hotel's night desk clerk. He arranged for his wife, Umm Miladah, to move with their two small daughters into the hotel. Umm Miladah warmly welcomed us to befriend her children.  It was a blessed release to laugh and play with the children, and somehow our antics and games seemed at least to distract Umm Miladah  from her rising anxiety as we waited for the U.S. to rain bombs and missiles down on us.

When the attacks began, Umm Miladah could often be seen uncontrollably shuddering from fear.  Day and night, explosions would rattle the windows and cause the Al Fanar's walls to shake.  Ear-splitting blasts and sickening thuds would come from all directions, near and far, over the next two weeks.   I would often hold Miladah, who was age 3, and Zainab, her baby sister of 1 ½ years, in my arms.  That's how I realized that they both had begun to grind their teeth, morning, noon and night.  Several times, we witnessed eight year old Dima; the daughter of another hotel worker, gazing up in forlorn shame at her father from a pool of her own urine, having lost control of her bladder in the first days of "Shock and Awe."

And after weeks, when the bombing finally ended, when we could exhale a bit, realizing we had all survived, I was eager to take Miladah and Zainab outside.  I wanted them to feel the sun's warmth, but first I headed over to their mother, wanting to know if she felt it was all right for me to step out with her children.

She was seated in the hotel lobby, watching the scene outside.  U.S. Marines were uncurling large bales of barbed wire to set up a check point immediately outside our hotel. Beige military jeeps, Armored Personnel Carriers, tanks and Humvees lined the streets in each direction.  Tears were streaming down Umm Miladah's face.  "Never before did I think that this would happen to my country," she said.  "And I feel very sad.  And this sadness, -- I think, it will never go away."

She was a tragic prophet.

The war had just ended for those killed during the "Shock and Awe" bombing and invasion, and it was to abruptly end for many thousands killed in the ensuing years of military occupation and civil war.  But it won `t end for the survivors. Effects go on immeasurably and indefensibly.

Effects of war continue for the 2.2 million people who've been displaced by bombing and chaos, whose livelihoods are irreparably destroyed, and who've become refugees in other countries, separated from loved ones and unlikely to ever reclaim the homes and communities from which they had to flee hastily. Within Iraq, an estimated 2.8 million internally displaced people live, according to Refugees International, "in constant fear, with limited access to shelter, food, and basic services."

The war hasn't ended for people who are survivors of torture or for those who were following orders by becoming torturers. Nor has it ended for the multiple generations of U.S. taxpayers who will continue paying for a war which economists Linda Bilmes and Joseph Stiglitz have so far priced at 4 trillion dollars.

For Bradley Manning, whose brave empathy exposed criminal actions on the part of U.S. warlords complicit in torture, death squads and executions, the war most certainly isn't over.  He lives as an isolated war hero and whistle-blower, facing decades or perhaps life in prison.

The war may never end  for veterans who harbor physical and emotional wounds that will last until they die. On March  19th, on the 10 Year Anniversary of the Shock and Awe invasion, members of Iraq Veterans Against the War, joined by the Center for Constitutional Rights and other activist groups will gather in front of the White House in Washington, D.C. to launch an initiative claiming their right to heal.

A civilized country would heed their call.  A civilized country would demand heartfelt reparations to the people of Iraq and cease to interfere in their internal affairs, would secure freedom and official praise for whistleblowers like Bradley Manning , and would rapidly begin to liberate itself from subservience to warlords and war profiteers.  Gandhi was once asked, "What do you think of western civilization?" And famously, he answered, "I think it would be a good idea."

[Thanks to the author for sending her article to Portside.]