China held its most important political meetings in ten years with the Communist Party Congress in Nov. and the National People's Congress in March 2013. A new leadership group assumed power: Xi Jinping is the new CPC general secretary and national president, Li Kejiang the premier of the state council. New officials assumed all but two positions in the political bureau's standing committee. A major decision is that China will change its economic development strategy. 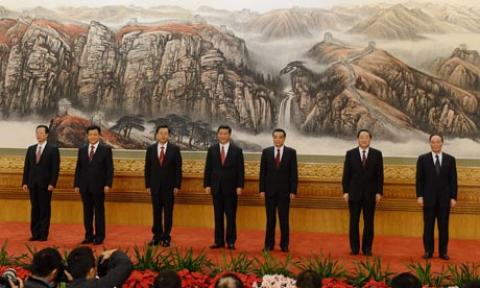 China held its most important political meetings in ten years with the Communist Party Congress in November and the National People's Congress (national legislature) in March 2013.  A new leadership group assumed power:  Xi Jinping is the new CPC general secretary and national president, Li Kejiang the premier of the state council and new officials assumed all but two positions in the political bureau's standing committee, the top decision making body of the communist party.  China's term limits regulations mandated the large turnover of leadership, which gives a good opportunity for setting new policies for the next ten years.

A major decision is that China will change its economic development strategy.  Outgoing General Secretary Hu Jintao's important report to the 18th party congress (Nov. 8, 2012) made clear the decision to "speed up the creation of a new growth model."  Officially adopted as basic policy, Hu's model of sustainable "scientific development" changes the focus to driving the economy by domestic demand, moving to higher value-added and high-tech production, higher wages and spending more on social services for the people.  New cities will be built in China's vast interior as population shifts from rural to urban.

Since the 1980s rapid economic growth has been driven by both large state funded projects and expansion of the private sector.  This included foreign direct investment in export oriented factories serviced by low wage migrant labor.  A huge success in increasing the production forces, this model however has led to increasing imbalances and problems; and now these issues must be addressed.

Many Chinese have been upset by the income gap, the disparity between the wealth of the newly affluent and the average working people.  Chinese workers have staged increasing strikes and protests over labor and environmental issues, leading to fears for social stability. Premier Li Keqiang, in his first press conference, said, "the Chinese government needs to increase care for the most needy to prevent them from challenging the society."  (China.org.cn, March 17, 2013).  In February the government announced detailed plans to address the issue, which the Wall Street Journal described as "sweeping policy guidelines to narrow the growing gap between rich and poor...and pay for ambitious welfare programs."  (Feb. 5, 2013)  The Guardian headlined, "China unveils major tax reforms to make rich pay more."  (Feb. 6, 2013)

These plans include: a goal of doubling citizens' incomes in the next ten years; raising taxes on profitable state-owned enterprises to better fund social services; caps on  managerial salaries in SOEs; paying higher interest rates on individual savings; greater benefits and safety net access to migrant workers; fair compensation to farmers selling land for developments; and other actions.  The plans are far reaching, if implementation is effective there will be progress in closing the gap.  (1)

During the 1980s and 1990s, China's focus was on rapid economic development as the basis of a strong, prosperous country.  This included changing from the mostly state-owned economy of Mao's last years to a more balanced mixed economy with state ownership of the strategic sectors of finance, heavy industry and infrastructure combined with fast growing private markets and production.  This program was a historic success, as China transformed itself into an economic powerhouse, greatly increasing the standard of living for most people and lifting 400 million people from poverty (according to both the UN and the World Bank poverty alleviation statistics, available online).  There was rapid growth in foreign trade not only with the West but also Asia, Africa and Latin America.

However, problems associated with China's economic transformation continued to mount: corruption, the increasing gap between the wealthy and average earners, exploitation of migrant worker labor, growing pollution and damage to the environment, partial breakdown of the social security system and safety net.  With Chinese public opinion starting to demand action on these problems, General Secretary Hu Jintao several years ago introduced "scientific development."  According to Hu, with powerful production forces now in place, China's long-term strategy must shift to a balanced, sustainable and people-centered approach.  That is, rapid GDP expansion should be tempered to emphasize quality and innovation and not just quantity, environmental damage and resource limits necessitate building a green economy, and central to everything must be the income, cultural life and well-being of the people -- the core mission of the communist party.   New General Secretary Xi Jinping's "China Dream" speech to the National People's Congress (People's Daily, March 18, 2013) emphasized the important of education, jobs and housing for the people.

The great recession of 2008 led to a loss of export markets for China and 20 million Chinese workers lost their jobs.  The state responded with a huge program of spending on public works.  Politically, the great recession dealt a major blow to the position of Chinese economists and officials advocating continued emphasis on foreign investment and the export sector.  State banks again began to prioritize investment in state-owned enterprises. Consensus grew that a change in economic policy was necessary.

Most members of China's 82-million Communist Party agree that both a strong state sector and dynamic private markets are necessary for development.  The question is getting the right balance -- what is the emphasis?  The 18th Party Congress reaffirmed the importance of the state sector and economic and social planning.

There is much enthusiasm for the center-left effort to correct many of the imbalances of rapid industrial expansion; but as one pundit said, "the plans are grand but the obstacles many."   In particular, central government decisions supported by the people often meet resistance by mid-level officials and local groups and  capitalists with a different agenda. Serious corruption and bureaucracy can make government initiatives ineffective.  The sheer size of China creates momentum that will take years to alter.

However, change is already apparent.   The Wall Street Journal, commenting on the business investment environment, reported on Jan. 17, 2013, "A long-term trend of rising wages and other costs has made China less attractive, especially for basic manufacturing... total foreign direct investment flowing into China fell 3.7% in 2012."

The focus in coming years will be on the success of actual implementation of the new economic model.  With China's economy on track in coming decades to equal and surpass the US as the world's biggest, it is important for all of us to watch how this unfolds.