Leaders of five of the world’s emerging economic powers agreed Wednesday to create a development bank to help fund their $4.5 trillion infrastructure plans — a direct challenge to the World Bank that they accuse of Western bias. 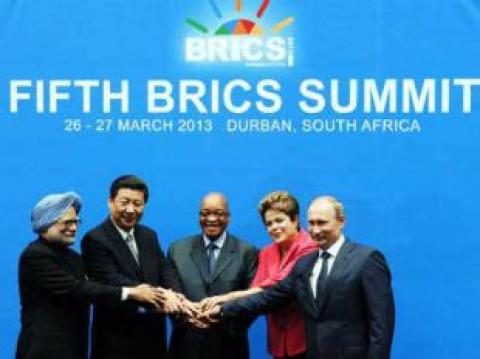 DURBAN, South Africa — Leaders of five of the world’s emerging economic powers agreed Wednesday to create a development bank to help fund their $4.5 trillion infrastructure plans — a direct challenge to the World Bank that they accuse of Western bias.

But the rulers of Brazil, Russia, India, China and South Africa —known as the BRICS group —were unable to agree on some basic issues. Foreign Minister Pravin Gordhan of South Africa told reporters that there were “different views” about how much capital such a bank would need.

He said $50 billion had been mentioned, an amount conference officials said would be seed capital shared equally between the five countries.

Finance ministers had discussed basing contributions on a country’s wealth, but then felt it would leave economic giant China, with the world’s No. 2 economy, in an untenably dominant position, according to conference officials, who spoke on condition of anonymity because they are not authorized to speak to reporters.

Analysts said there was little doubt that China, with the world’s largest reserves of foreign exchange, inevitably would be dominant, perhaps in much the same way that the United States and Europe dominate the World Bank and the International Monetary Fund.

The development bank would be the first institution of the informal BRICS forum which was started in 2009 amid the economic meltdown to chart a new and more equitable world economic order. South Africa joined two years ago.

“Russia supports the creation of this financial institution,” President Vladimir Putin said Wednesday, but he cautioned “we believe that, if it is created, then it must work on market principles only and support the businesses of all our countries.”

But his deputy foreign minister, Sergey A. Ryabkov, implied the announcement was premature: “We are not contesting the idea, we support it, we favor it, but we are urging everyone to be serious enough to make further efforts in order to create the right foundation.” They were at a stage where “the devil is in the details,” he added.

Inability to agree on fine points about the bank, first mooted a year ago when finance ministers were tasked with exploring its feasibility, highlighted the differences between the bloc that is made up of democracies and autocracies, diverse foreign policies and structurally different economies.

But at the fifth BRICS summit, its first in South Africa at the coastal resort of Durban, leaders pointed to their shared histories and aims: South Africa, very much the junior partner with a much smaller economy, has a decades-old relationship with China and Russia since they funded and armed anti-apartheid liberation movements; it shares a history of colonization with Brazil, a country that was the destination for more African slaves than any other; and with India as Mahatma Gandhi lived in South Africa for more than 20 years and developed his political activism here as he faced discrimination from a white minority government.

South African President Jacob Zuma, whose country is lobbying to be home to the BRICS development bank, said the formal negotiations to establish the institution were “based on our own considerable infrastructure needs, which amount to about $4.5 trillion U.S. dollars over the next five years.” The bank will also cooperate with other emerging market countries and developing economies.

Zuma said the bank also will establish a “BRICS contingent reserve arrangement,” a pool of money to cushion member states against any future economic shocks and further lessen their dependence on Western institutions.

Both those aims challenge the traditional roles of the World Bank and the International Monetary Fund, institutions that in their 50-year life have been dominated by the United States and Europe.

“As cooperation between the BRICS becomes more increasingly institutionalized, it will begin to challenge the economic architecture set out by the Bretton Woods institutions, regarded by many policy-makers within the BRICS as obsolete and biased toward the developed world, “ analyst Martyn Davies of Frontier Advisory wrote this week. “The underlying motivation within the BRICSs is to assert their own collective interests, hard though they are to define, and do so against established Western ones.”

While BRICS nations emphasize their equal partnership there is no doubt about the dominant role in trade and investment played by China, the world’s most populous nation and its second largest economy which recently overtook the United States as the biggest importer of oil. China also has the world’s largest foreign exchange reserves.

This BRICS summit has been dedicated to supporting development in Africa — Zuma invited 15 other African leaders to the meeting — and analysts note that some BRICS nations are rivals in the scramble for Africa’s resources.

China long as overtaken traditional former European colonizers as Africa’s biggest trading partner. Recently there have been rumbles about the nature of China’s investment in Africa.

Botswana’s President Ian Khama last month lambasted China for shoddy work in his country, saying “We have had some bad experiences with Chinese companies.” In an interview with South Africa’s BusinessDay newspaper, Khama blamed Chinese companies for a spate of power cuts he blamed on Chinese construction of a power plant that is months behind schedule.

Khama also expressed concern about the rate of Chinese migration to Africa, saying “We accept China’s goods. But they don’t have to export their population to sell us those goods.”

And in a recent opinion piece the governor of Nigeria’s central bank, Lamido Sanusi, accused China of being “a significant contributor to Africa’s de-industrialization and underdevelopment,” with its cheap manufactured goods competing with African goods on the continent and its huge appetite for raw materials preventing Africans from adding value to their natural resources. Sanusi suggested there was a “whiff of colonialism” about China’s Africa policy.

China’s new leader Xi Jinping, in a keynote speech before attending his first international summit at the BRICS, said China would “intensify, not weaken” its relationship with Africa. On Wednesday he told the summit China will “support Africa’s efforts for stronger growth.”

He said China would continue to make its own and international development priorities as it works to achieve a “grand goal” of doubling China’s gross domestic product and the per capita income of its population of 3 billion by 2020.

Other leaders at the summit gushed about the possibilities opened by their fledgling BRICS forum, which represents nearly half of the world’s population and more than a quarter of world trade.

India’s trade minister Anand Sharma said BRICS will “have a defining influence on the global order of this century.”

He warned against trade protectionism, which has played out within BRICS with South Africa accusing Brazil of dumping poultry products.

Brazil’s President Dilma Rousseff said BRICS has confounded its critics. “Even the most skeptical voices do recognize the contribution the BRICS bloc of countries has provided in the field of international economics,” she said. Even the World Bank has said that global growth over the past few years and for the foreseeable future is being driven by the bloc.

Rousseff said it is time multilateral institutions like the IMF and World Bank become more democratic to clearly reflect the growing influence of developing countries.

Copyright 2013 The Associated Press. All rights reserved. This material may not be published, broadcast, rewritten or redistributed.