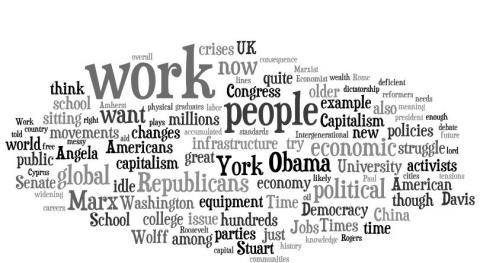 REWIND - A Week of Quotes & Cartoons

''The modern world has spread many things: the rationality of science; the rule of law; and the messy, but generally robust, forms of democracy. Yet none of these is as contested as capitalism. Capitalism has run into repeated crises of profitability. But it has also run into periodic crises of meaning. In every capitalist economy there are anti-capitalist movements, activists, and even political parties, in a way that there are no longer anti-democratic movements, activists, and parties. There are hundreds of millions of sceptics and cynics who look with distaste on the bland reassurances of corporate advertising - dissidents in their heads even if not on the streets. For all its achievements in raising living standards, capitalism has, quite literally, failed to make enough sense - not just for the losers but often for the winners.'Geoff Mulgan

'That's not to say Marx was entirely correct. His "dictatorship of the proletariat" didn't quite work out as planned. But the consequence of this widening inequality is just what Marx had predicted: class struggle is back. Workers of the world are growing angrier and demanding their fair share of the global economy. From the floor of the U.S. Congress to the streets of Athens to the assembly lines of southern China, political and economic events are being shaped by escalating tensions between capital and labor to a degree unseen since the communist revolutions of the 20th century. How this struggle plays out will influence the direction of global economic policy, the future of the welfare state, political stability in China, and who governs from Washington to Rome. What would Marx say today? "Some variation of: `I told you so,'" says Richard Wolff, a Marxist economist at the New School in New York. "The income gap is producing a level of tension that I have not seen in my lifetime".'

Michael Schuman, writer on Asia
and global economic issues as a
Time magazine correspondent
in Beijing

'[President] Roosevelt went on the radio to the American people and said, basically, "If the private sector either cannot or will not provide work for the millions of Americans that need and want to work, then it's my job as president to do it." And he did it.

'And I think Mr. Obama could and should overcome whatever has made him hesitate. We in this country not only don't have a federal employment program, the Republicans and Democrats haven't even put it on the floor to debate it as an important issue, even though it comes out of our own history. So I would say, put us-put our people to work. They want to work. The Federal Reserve says 20 percent of our tools, equipment, factory and office space is sitting idle, unused. So we have the people who want to work; we have the tools, equipment and raw materials for them to work with. And lord knows we need the wealth they could produce. Put them to work, and make it a national issue that that happen.'

Richard Wolff, a professor emeritus
at the University of Massachusetts,
Amherst, now at New School
University, author of Democracy
at Work: A Cure for Capitalism.

''As I grow older, I try my best to hold on to the courage, enthusiasm and willingness to venture into new territory that is most often characteristic of young people. But at the same time I try to draw appropriate lessons from the experiences I have accumulated. For example, I really do understand now the importance of physical, mental and spiritual self-care. As an older person, I find that a great proportion of the new knowledge I encounter comes from young people. Intergenerational contact is good for us all.'

We Patented That!
Stuart Carlson

'The school reformers peddling neoliberal snake oil, promising the healing benefits of privatizing the country's public school system, are undoubtedly watching Chicago very closely, looking for strategies to export to other cities. But the teachers and communities sure to be devastated by such policies should pay attention, too, as free market education policies spread from New Orleans and Detroit to Philadelphia and beyond, they might glean some useful lessons for resistance.' ' You don’t have to be a civil engineer to realize that America needs more and better infrastructure, but the latest “report card” from the American Society of Civil Engineers — with its tally of deficient dams, bridges, and more, and its overall grade of D+ — still makes startling and depressing reading. And right now — with vast numbers of unemployed construction workers and vast amounts of cash sitting idle — would be a great time to rebuild our infrastructure. Yet public investment has actually plunged since the slump began. 'Or what about investing in our young? We’re cutting back there, too, having laid off hundreds of thousands of schoolteachers and slashed the aid that used to make college affordable for children of less-affluent families.

'Last but not least, think of the waste of human potential caused by high unemployment among younger Americans — for example, among recent college graduates who can’t start their careers and will probably never make up the lost ground.'

Messing You Up
Rob Rogers

Quote of the Day'Mr. Obama assured House and Senate Republicans during recent separate visits that he could support specific cost-saving changes to Medicare and deliver Democratic votes, though only as part of a “balanced” package that had additional revenues.

'Several changes are likely to once again be in his annual budget, which will be released on April 10, after Congress returns from its break. Mr. Obama also plans a dinner with Senate Republicans that night.'