Forty-five years after King was killed supporting their historic strike, some of the same men who marched with him still pick up Memphis' garbage - and now they are fighting to hold on to jobs that some city leaders want to hand over to a private company. 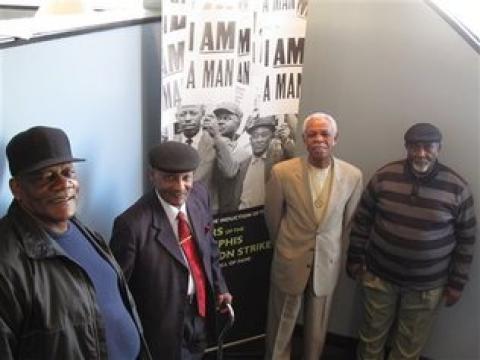 Alvin Turner, the Rev. Leslie Moore, Elmore Nickleberry and Baxter Leach, from left, pose for a photo at the headquarters of Local 1733 of the American Federation of State, County and Municipal Employees on Thursday, March 14, 2013 in Memphis, Tenn.,

MEMPHIS, Tenn. They rode the streets of Memphis in creaky, dangerous garbage trucks, picking up trash from home after home, toiling for a sanitation department that treated them with indifference bordering on disdain. In 1968 those workers took to the streets, marching with civil rights leader the Rev. Martin Luther King Jr. to demand better working conditions, higher pay and union protection.

Forty-five years after King was killed supporting their historic strike, some of the same men who marched with him still pick up Memphis' garbage - and now they are fighting to hold on to jobs that some city leaders want to hand over to a private company.

"It looks like they're trying to take us down again," said 81-year-old Elmore Nickleberry, one of the original strikers who still drives a garbage truck at night for the sanitation department. Nickleberry is expected to take part in a Thursday march to honor King's sacrifice on the 45th anniversary of his death.

But city council members who favor privatization say the city can't afford to ignore a chance to save $8 million to $15 million in a tough economy.

As the leaders and workers stake out their positions on today's jobs, the shadow of the struggles of 1968 looms over them.

Forty-five years ago, Nickleberry and Memphis' 1,300 other sanitation workers were overworked and underpaid, picking up others' grimy, leaking waste without proper uniforms. They faced the daily risk of severe injury or death while working with malfunctioning garbage trucks.

They took a job no one else wanted, mostly black workers picking up the trash of white people, serving in what some scholars liken to an urban extension of plantation life on the cotton fields that fueled Memphis' economy. Their demeaning nickname: "walking buzzards."

After two workers were crushed to death in a truck's compactor, the sanitation workers went on strike Feb. 11. They demanded a raise that would take them off welfare lines. The situation had obvious racial undertones: Most of the workers were black, and city officials standing against the union were white.

With the slogan "I am a man," the workers also wanted the respect and dignity that comes with doing a low-paying, back-breaking job with great pride and effort.

King came to Memphis to support them. He delivered his last public speech April 3, declaring, "I've been to the mountaintop."

The next day, standing on the balcony of the Lorraine Motel, King was killed by a rifle bullet fired by James Earl Ray from a boardinghouse across the street.

The assassination led to riots in Memphis and several U.S. cities. But the strike, stained forever with King's blood, turned to victory when the city acquiesced to a 10-cent raise and succumbed to other demands, including unionization.

"It signified the close relationship between labor relations and civil rights and human rights," said Thomas Kochan, an industrial relations professor at the MIT Sloan School of Management. "Dr. King epitomized a leader who recognized that relationship, and that's what brought him to Memphis."

Much has changed since then. Memphis has had a black mayor since the early 1990s, and today's city council is majority black.

But in 2013, the power of unions in America isn't what it was in 1968. And the lure of privatization is strong for cash-strapped public officials.

The move toward privatization in Memphis began to swell two years ago, when the city council agreed to offer buyouts to retirement age employees. The buyout plan was never implemented, and the money was used elsewhere.

Conrad says the $25 per household solid waste fee is too high.

Officials have been slashing costs in the sanitation department. It currently has 124 unfilled positions out of about 619 total, resulting in $5 million in savings.

Conrad contends that Memphis and its residents could save millions more by privatizing the city's sanitation work because a company will be more efficient. A private company likely will introduce more technically advanced trucks into the mix. The automated trucks require fewer workers and can make almost double the number of stops in one day.

Conrad supported a $13 million voluntary buyout plan and blames inaction from the administration for allowing about 35 eligible workers to retire without a buyout option. Some 45 of the department's employees are above age 63. After buyouts are taken, Conrad says, the city could outsource the remaining jobs and the corresponding garbage collection routes.

"It's just another example of not focusing on the basics of city government, the nuts-and-bolts core services, and our employees lose and the taxpayers lose," Conrad said.

Municipalities such as San Francisco and Toledo, Ohio, have privatized sanitation services. Others have fluctuated between private and public garbage collection. One option that has been used in Phoenix and Indianapolis and may be considered in Memphis is managed competition, which allows a city or a public agency to make its own bid to compete with offers from private companies.

Chad Johnson is the local point man for AFSCME, the American Federation of State, County and Municipal Employees. He said the city has no clear plan for its sanitation services and has not done enough research to determine if privatization is the right course.

Johnson's goal is to preserve the jobs of the current sanitation employees, while also shedding light on some current problems within the department: an aging truck fleet, subpar training, insufficient retirement benefits and, once again, problems with worker safety.

Conrad counters that the biggest impediment to the process is the union, which he called self-serving.

"They don't have much clout, but because many of our elected officials have a desire to make everybody happy and to please everybody, this continues to stall out," Conrad said.

Wharton says he will not be personally involved in the negotiations but could step in if needed. He stresses that he is not advocating privatization but has mentioned managed competition as a "feasible" option.

"I am open to whatever," Wharton said, adding that he'd like to avoid a "winner-take-all, zero-sum game."

George Little, Memphis' chief administrative officer, plans to update the council in early May, after a meeting with Johnson on April 11.

For now, the future of the city's sanitation workers is in limbo. Such uncertainty concerns Nickleberry.

For 79-year-old retired sanitation worker Alvin Turner, it seems history is being repeated.

"This is a fight that we fought in 1968, and we may as well get prepared to fight it again."