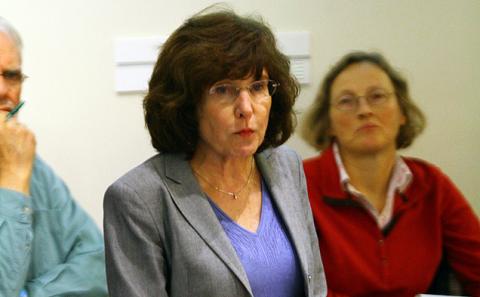 UNC history professor Jaquelyn Hall, moderates a discussion between scholars from around the Triangle area about their concerns regarding the North Carolina legislature., Philip Catterall / The Chronicle

Scholars from around the region gathered Thursday to discuss the negative implications of Republican control on North Carolina politics.

Duke faculty, alongside professors from North Carolina Central University, North Carolina State University and University of North Carolina at Chapel Hill, held an eight-person panel discussion, “Save Our State: Scholars Speak Out on North Carolina’s New Direction,” titled to address issues including health, environmental and educational polices in a Republican-dominated North Carolina state government. The members of this panel individually denounced the initiatives of GOP legislators in the state since the party took control of both houses of the General Assembly in 2011 and both the governor and lieutenant governor seats in 2013.

In their individual speeches, each panelist described the major problems existing in the state as a result of conservative policy decision-making in the state’s General Assembly. David Jolly, associate professor and chair of the public health education at NCCU, referenced conservatives’ decision to reject the Medicaid expansion outlined in the Affordable Care Act.

“[Republicans] say Medicaid is a broken system, and we shouldn’t put new people into a broken system,” Jolly said. “But it clearly is not broke... and it would pump billions of dollars into the economy—$15 billion in the first eight years.”

Multiple panelists, including Helen Ladd, Edgar T. Thompson distinguished professor of public policy and economics, also referenced education as an area of the state gone awry under conservative control. Ladd cited a bill recently introduced in the state Senate for educational reform. The proposed bill would set up a dual system of K-12 districts under which publicly funded charter schools would be supervised by separate school boards.

“Strong public education systems take years to build, but can be quickly destroyed,” she said. “We will eventually face the daunting and perhaps impossible task of reinventing a system that has already worked well in the past.” The current legislative body is not the only thing to blame for what Levenstein described as a “disturbing policy agenda,” said Robert Korstad, Kevin D. Gorter professor of public policy and history.

He added that the conservative decisionmaking they were speaking of was “nothing new.”

Gunther Peck, Fred W. Shaffer associate professor of history and public policy, pointed out one instance in which new and old conservative polices are not the same. In environmental protection issues, Peck said former presidents Theodore Roosevelt and Richard Nixon were two of the “greenest presidents” and used their environmentalism to create larger Republican majorities in Congress.

While the speakers did not drop names or point fingers at specific people in the legislature, much of the speeches’ content was focused on praising progressive policies and condemning conservative initiatives rather than presenting plans or solutions to them.

In the audience, Nick Carnes, assistant professor of public policy, asked the panel what they plan to do in response to the legislature they disagreed with so fervently.

“We’re asking all the people who are connected with higher education and care about the agenda to join us and to try to help us recruit other people so we can build throughout the state,” said Nancy MacLean, William H. Chafe professor of history and public policy. “Each one of us is part of organizations and congregations. [There are] people we can contact and express our concern about what’s going on—that’s the short answer.”

The event was sponsored by the Scholars for a Progressive North Carolina, a higher education organization dedicated to promoting progressive political causes, and was hosted at Sanford School of Public Policy.