"If you don't have anybody following you," Cecil Roberts, president of the UMWA said at the rally, "you're not a leader; you're just taking a walk. When we walk out of this building today I'm going to be a leader because there is going to be 5,000 of you walking behind me." 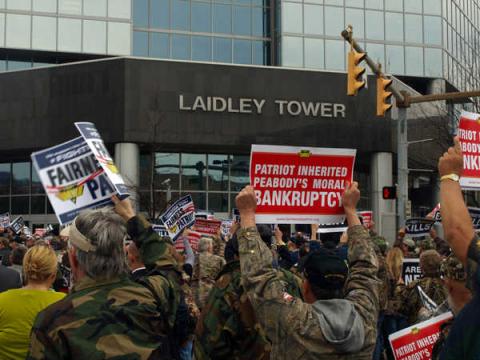 The streets of Charleston were packed with thousands of supporters of the United Mine Workers of America's Fairness at Patriot campaign after pouring from a rally at the Charleston Civic Center.

The Fairness at Patriot campaign is an effort to preserve the retirement and health benefits of thousands of Patriot Coal miners as the company moves through bankruptcy. A spin-off of Peabody Energy and to a smaller extent, Arch Coal, Patriot Coal is said by union members to have been purposely designed to fail.

The company was formed with a large portion of Peabody's assets – percentage-wise, the company received much fewer assets.

"If you don't have anybody following you," Cecil Roberts, president of the UMWA said at the rally, "you're not a leader; you're just taking a walk. When we walk out of this building today I'm going to be a leader because there is going to be 5,000 of you walking behind me."

While other unions, workers and officials came forward to support the Fairness at Patriot campaign, the Charleston Civic Center, and later the streets of Charleston, were packed with miners directly affected by the bankruptcy.

Roger Sharps, 62, retired from a Peabody operation in 2007. He said all of the insurance and health care he and his wife needs is now at risk, despite more than 20 years working directly at the face of the mine at Peabody.

"I never worked for Patriot," Sharps said. "We told every man up there when they went in there and said they were changing the name to Patriot Coal Company, we was going to get screwed over. We told them five years, give them five years and see what they do."

Five years later, former employees of Patriot, Arch and Peabody would all be facing the potential loss of their benefits.

Jessie Combs, 56, Boone County, retired in 2007 after working in the union since he was 18 years old.

He left the mines after he broke his neck in a roof fall.

"I just don't want to lose my pension or my health care. It's everything I worked for all my life," Combs said. "I thought this was ridiculous. You work for something your entire life and they just file to take it away. I nearly gave my life."

His wife has breast cancer, and now Combs said he worries about their future.

"It changes our whole life," he said. "It's just not right."

Jim Bocz has a few years left before retirement from the coal mines. He's not a coal miner with one of the companies under the union's scrutiny at the rally, but he said he wanted to come and show his support for the workers who "helped build this country."

"You let them start doing things like this, and it starts out small," Bocz said. "Then they get bigger and bigger and before you know it, nobody has health care in the industry. … Meanwhile they are making millions and billions of dollars and these CEOs are making all these big bonuses. … It's not right we're the ones that sacrifice our bodies and our health to get this coal."

Roberts echoed the words of Jesus, claiming those not with the UMWA was against it and called on an old union folk song asking "which side are you on." Roberts and 15 others would go on to be arrested after they marched to Patriot headquarters, the third time Roberts has been arrested for the Fairness at Patriot campaign.

On Oct. 31, 2007, Peabody Energy took all of its union operations east of the Mississippi River and some of its non-union operations and spun them off into Patriot Coal. About 61 percent of miners at the new Patriot operations were represented by the UMWA.

According to Patriot's 2007 annual report, the company had 10 company-operated mines, "numerous contractor-operated mines" and eight coal preparation facilities. Five of those were in West Virginia. At the time, Patriot controlled about 1.3 billion tons of proven and provable reserve, shipping 77 percent of its coal to domestic electric utilities.

Peabody Coal, in a prepared statement, said that Patriot Coal was spun off at a time and in a manner that it was believed to have been capable of becoming a viable company. The statement was similar to the response Peabody has made to UMWA's allegations since the campaign began.

"Peabody has lived up to its obligations and continues to do so," the statement read. "The UMWA is fully aware that this is a matter solely between the union and Patriot Coal, and the proper process for deciding such issues is through the bankruptcy court – not the court of public opinion."

Peabody points to the acquisition of Magnum Coal Company, a former Arch operation, as one of the actions Patriot took instead of strengthening its financial position.

Patriot Coal did not immediately respond to a response for comment.

"It is our understanding that when Patriot's market value was high, the company could have strengthened its financial position," stated Peabody Energy. "Instead, Patriot made a major acquisition of Magnum Coal Company in mid-2008."

Trumka called the efforts of Patriot, Peabody and Arch "vulture capitalism." He said if anyone wants to claim to be Friends of Coal, they need to stand now and be friends of coal miners and "fight with us."

"When we stand up against the corporate rip-offs and bonus culture and against Wall Street cheats, when we stand up for American value, for the dignity of our retirees and for fairness for everyone, we stand up for every worker in America," Trumka said. "Those workers, 12.5 million strong, every one of the members of AFL-CIO believes in you and we stand with you shoulder today, tomorrow and everyday until we force Peabody and Arch and Patriot to honor their commitments, to live up to their word and provide the benefits our brothers and sisters and mothers and fathers have earned."

Manchin said he believes in coal, but he believes the companies that mine it should be responsible to its employees. Manchin took a stand against not only Patriot's attempt to have retirement obligations dismissed in bankruptcy but also pointed the finger at former owners of Patriot assets and liabilities Peabody and Arch.

Tennant is herself a union member and said her primary reason for standing with the union is because it is an attack on "all American workers" and retirees who "played by the rules."

"We can't let this stand, because today, this is an attempt to take away the health care that was owned on your broken backs, on your black lungs and on the memories of your fellow miners who took their last breaths in the coal mines," Tennant said. "What's worrisome is that tomorrow it can be an attack on construction workers, nurses, secretaries, teachers; who knows where it stops?"

Rahall said that he was proud to be an "honorary member" himself of the UMWA. He quoted Mary Mother Jones in declaring the fight of the miner is a divinely inspired fight. He also touted efforts to keep coal employee benefits intact with the recently introduced CARE Act, a joint effort with the support of Rockefeller, Rahall and Manchin.

Rockefeller commented from a video submitted and played to those at the rally. He said the miners went underground with a clear pledge that they and their families would be taken care of instead of being "left in the dark."

"It's a sad day indeed when our coal miners reward for a lifetime of hard work is health problems, mounting debt and uncertainty rather than the lifetime health benefits you were promised," Rockefeller said. "It's nothing less than shameful."

Gov. Earl Ray Tomblin, originally from the coalfields in Logan County, said he is honored to support benefits of retired coal miners. He said he would continue to urge Patriot to be fair in its bankruptcy proceedings.

"A lot of people see the coal miners face with the dust all over it and that's all they see is another worker out there," Tomblin said. "When I see that, I see a family, a wife, children they are responsible for and they are working everyday to make sure their families are taken care of. … Those are the benefits we are talking about losing today. Those are rights they have worked for and those are things we all need to stand up and fight for to make sure they's got them."

UMWA Secretary of Treasury Daniel J. Kane said he was confident in the fight against Patriot, particularly given the packed crowds attracted to Monday's rally.

"We hear so many times, we live in a country of laws and the laws are supposed to exist to ensure justice and peace and security," Kane said. "When the laws are manipulated to unfairly enrich the few and impoverish the many, it's time for a change. I believe this is such a time in America."

The following people were arrested in relation to the protest Monday: