Arguments against Michigan's 5-day-old right-to-work law are prompting conservative activists and Republican authors of the historic legislation to consider other ways to reduce the power of public-sector unions. 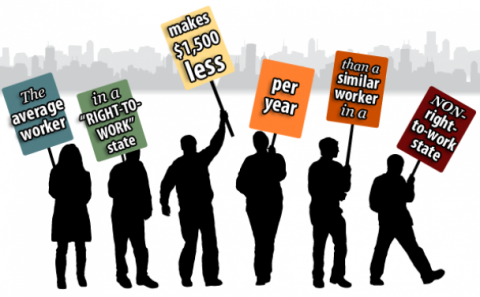 With right to work in place, state GOP explores other restrictions

Lansing — Arguments against Michigan's 5-day-old right-to-work law are prompting conservative activists and Republican authors of the historic legislation to consider other ways to reduce the power of public-sector unions.

The law that took effect Thursday makes financial support of a labor union optional in unionized workplaces. Democratic opponents say it will lead to "free riders" or "freeloaders" who enjoy the benefits of a collective bargaining agreement because most labor contracts have exclusive representation clauses requiring the union represent all employees, whether or not they pay dues.

To counter this argument, some conservative activists are proposing an offspring of the right-to-work legislation. They are urging Republican lawmakers to ban exclusivity clauses for public-sector unions — the state's recognition that a union is the sole representative in bargaining for a particular group of workers.

"It does away with one of the talking points the opposition will use in the ballot campaign leading up to November 2014, because we're all certain that will happen," said conservative activist Gary Glenn, president of the American Family Association of Michigan.

Labor leaders said they have not ruled out asking voters next year to eliminate the right-to-work law through a ballot proposal, even after voters last year rejected the multimillion-dollar Proposal 2 initiative to enshrine collective bargaining in the state constitution.

State Rep. Mike Shirkey, the leading legislative advocate of the right-to-work law, said he has drafted but not filed a bill to eliminate exclusive representation for unions.

"The freeloader argument only exists because unions choose to put the exclusivity clauses into contracts," said Shirkey, R-Clarklake. "I think that is the next modernization of union worker contracts in the government sector."

"When there are some who stop paying dues, we still care about them, and we want working people treated right," said Hecker, whose union represents 35,000 educators including those in Detroit, Utica, Roseville and some at Michigan State and Eastern Michigan universities.

Just as he did with the right-to-work legislation, Shirkey is holding back from introducing the exclusivity ban bill. He said he wants to see how the legal and political battles over right to work play out.

"It's worst for employers because they have to deal with a multitude of entities that claim to represent groups of employees," Nickelhoff said.

With workers now free to choose whether to pay union dues or agency fees, he said, Republican proposals to eliminate "freeloaders" are insincere.

"They could have taken care of the freeloader problem by not passing right to work, but that horse is out of the barn, so it's a little too late to have remorse for that," Nickelhoff said.

Private-sector unions are regulated by the federal government, so the Republican-controlled Legislature could only target unions that represent municipal and state government employees.

Since Republicans took control of the state House in 2011, the GOP majority has shown an interest in reining in public-sector unions, passing laws that cut health care and retirement benefits, eliminate teacher tenure and bar school districts from collecting dues for teachers unions that traditionally have supported Democrats.

Another issue some lawmakers are exploring is requiring workers to recertify their union each time a contract is up for renewal.

"A lot of these guys have never had a chance to vote on whether they should have a union in their workplace in the first place," said state Sen. Pat Colbeck, R-Canton. "Folks who have been in the UAW for years should definitely have the opportunity to say whether the UAW should represent us."

Union leaders argue there's already a process for decertifying a labor union, though it's a rarely used option. Last year, teachers in Roscommon voted to leave the Michigan Education Association and decertify their union.

"This is an idea in search of a problem — there is no problem to be solved," said House Democratic Leader Tim Greimel of Auburn Hills, a labor attorney by trade. "Workers already have complete freedom to choose whether to be represented by a labor organization, and if so, which labor organization."