a very different kind of memorial – the stumble stones 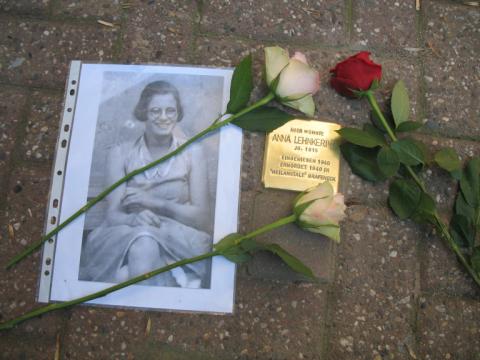 The late, late snow has finally disappeared from Berlin’s streets. Visible once again, here and there, are the “stumble stones” –Stolpersteine in German – with their brief, tragic messages.

Many Berlin tourists will enjoy the night life. They may also look upwards – at the giant TV tower, the Brandenburg Gate, at ancient and less ancient churches. There is a wide assortment of memorial monuments, some impressive, some uninspiring.

But those who look downward, to the pavement where they walk, may glimpse a very different kind of memorial – the stumble stones.
They are small concrete blocks in the ground, 10 x 10 centimeters square (about 4 x 4 inches), topped at sidewalk level by a brass plaque of the same size. Most are placed at entranceways to houses where people once lived – people seized by the Nazis and sent to die in a multitude of death sites in all the conquered territories. Some were suicides. The message on the little plaque contains a name, a year of birth, the date of deportation and, if known, the place and date of death. There is room for little else. But the scant facts can tell a tragic story.

Sometimes there is only one plaque. Often, most movingly, there are two, three, four or five, placed neatly next to one another. As in Oranienburger Strasse, for example, near the impressively rebuilt, golden-domed synagogue; a group of five small squares, all for a family named Kozower, each with a name and year of birth: Philip, 1894; Gisela, 1901; Eva Rita, 1932; Alice, 1934; Uri Aron, 1942. And under each birth year: “Deportiert Theresienstadt 1943” and “In Auschwitz ermordet”.

These small memorials are placed wherever local people – those now living in the house, perhaps church groups, anti-fascist organizations, very often schools – decide to hunt up the facts and collect 120 Euros to pay for each plaque.

Then they can turn to Gunter Demnig, now 66, who had the idea for the stumble stones, and who makes every block, each and every letter by hand, and who mixes the concrete, attaches the brass plaque and secures it between the small paving stones so frequent in German streets. He has recently begun to train two apprentices to assist him.

Demnig, born in Berlin, became an artist and industrial designer in West Germany and began work at restoring monuments. Like so many students in those years he was a political person; he spent some hours in jail for hanging out an American flag with skulls instead of stars as a protest against the killing in Vietnam. In 1990 in Cologne he painted a long white line of letters through the town, forming the words, over and over: “May 1940 – 1000 Roma and Sinti”. Fifty years earlier this group, the “Gypsies”, defended by almost no one, had been forced along this line to the railway station as a test for far larger deportations soon to follow.

Then, in Cologne in 1995 and a year later in West Berlin, he started his project of making one stone for each individual, retrieving them from the anonymity of large memorials visited, all too often, solely on special occasions. At first he placed the stones without official permission, but Germany made it legal in 2000 and he was soon called upon by people in one town and city after another. He has personally placed almost 38,000 such stones in over 650 German towns and cities, nearly 5000 in Berlin alone, and he has also been invited to place stones in over a hundred places in the countries surrounding Germany, as far as Norway and the Ukraine.

Gunter Demnig, in his denim work clothes and broad-brimmed hat, carefully anchors each stone solidly in the ground. There is always a ceremony, in all weathers, usually with music and poetry, almost always with flowers, and often organized by the school classes which did the necessary research - in local archives or as far as Yad Vashem in Jerusalem. Sometimes, rarely, a grateful grandchild or other surviving relative can be present.

Despite the name, no one stumbles over these stones; they are no higher than sidewalk level. Asked about this, Demnig likes to quote a schoolboy who once participated: “No, no, nobody stumbles and falls, you stumble with your mind and with your heart.” Demnig feels that even the bending needed to read the messages on the stones is, in a way, a symbolic bow of quiet respect to those whose names he wishes to rescue from forgetfulness.

Above most names are the words:  “Here lived…” and the site is the last voluntary home of the person named – or where the house was once located. But Demnig also varies the pattern:  “Here worked…” or “Here studied” or “Here taught” – several are near the Humboldt University building on Berlin’s central Unter den Linden boulevard.

Most stones recall Jewish victims. But some years ago this was broadened to include, along with Roma or Sinti, homosexuals, Jehovah’s Witnesses or handicapped victims, also those who fought and died as active anti-fascists.

The names, the locations of the stones, and more biographical notes wherever possible are now available in Internet. So it is possible to know more about some names on the stones, now scattered so widely around the country.

For example, we can learn just a little more about two young men from Hoechst on the Main River. Friedrich Schuhmann, machinist and hobby mandolin player, was a Communist. The plaque says: Born 1906, fled 1933 to the Saarland, (not yet German-ruled at the time, VG), 1936 Spanish Civil War, Thälmann Battalion; Died July 6 1937, Brunete. We can read that he joined the fight in Spain even before the International Brigades were formed, and that he was one of fourteen men who died in that first day’s battle for Brunete. Surviving relatives learned the facts only through this research.

The other from Hoechst, Fritz Hartmann, born a year earlier, was a Social Democrat. After two arrests by the Nazis for his resistance he fled in 1933, also to French-occupied Saarland. When it voted to join Hitler-Germany he fled to France, continued fighting, but was caught in 1940 and sent to Mauthausen Concentration Camp. On April 13th 1945, only weeks before war’s end, he was murdered. The other stones in Höchst, over 50 of them, are for Jewish victims.

Not everyone supports Demnig’s project. In Cologne a court decided to tax the stones with a severe 19 % value added tax, since the lower 7 % rate is permitted only for “creative works” and the many thousand stones in Germany, it was ruled, represented mass production. But Demnig could prove that every plaque, every letter was carved by hand and so was able to win the case.

In Munich a serious objection came from the head of the Jewish Congregation, who found it “insufferable” that the names of Jews killed by the Nazis should be on plaques over which people walked back and forth every day. Her objections, though not shared by all Congregation leaders, were backed up by the mayor, and the stones in Munich, still prohibited on public sidewalks, are restricted only to private property. A large number are in storage.

But Demnig and many, many others, while they may understand these objections, are convinced that this way of personalizing the fates of individuals who once lived at these places, with birthdates and death dates and places, helps to preserve their memories, while making clear that those who lived here must have known very well what was happening to their next-door neighbors. They see this as an urgent reminder for the present, a stimulus to thinking and often necessary re-thinking.

And indeed, it is not only snow or footsteps which render them temporarily less legible. Last year, in Greifswald, an area hard hit by neo-Nazis, eleven stones were torn out and stolen. A few weeks ago in Berlin newly-placed stones were smeared with tar during the night. Those which disappear are soon replaced and, as Demnig says, “With a little benzine and a spatula the tar is gone.” Red lacquer was once used. “I got rid of it with a solvent. Some color remained in the letters, making them easier to read.“

One night last September in Wismar nine stones were covered over with a steel plate marked with the birth and death dates, even the rank and decorations of German Wehrmacht soldiers, some from the most murderous SS divisions. The struggle with the forces of darkness is by no means a settled affair. Perhaps these little stones, combined with the efforts and research of pupils in the schools and people in those houses, will affect this on-going struggle. As the pupil said, the stumble stones are something for hearts and minds.