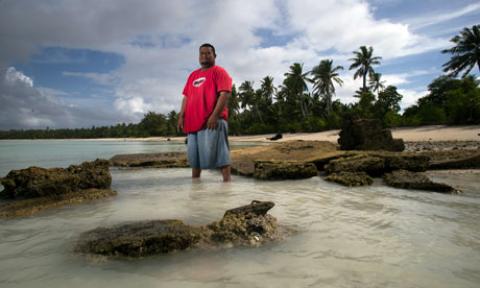 Kiribati: Toani Benson stands on the ruins of the store that sold him petrol for his school's generator in the mid-1990s., Mike Bowers/The Global Mail

Australia, a close neighbour of small, low-lying South Pacific states at the frontline of climate change, should be the first country to formally recognise climate change refugees, the country's main refugee advisory body has said.

The Refugee Council of Australia has told the Australian government that it should create a new refugee category for those fleeing the effects of climate change so that they can be offered protection similar to those escaping war or persecution.

The key legal document that defines refugees, the Convention Relating to the Status of Refugees, defines a refugee as a person who has a well-founded fear of persecution in their homeland because of their race, religion, nationality of membership of a particular group.

The convention – forged in 1951 in the aftermath of world war two – does not offer protection to those claiming to be endangered by climate change. Its limits were tested in New Zealand last year by a 36-year-old Kiribati man who argued before an immigration tribunal that he should not be deported because he feared for his own future and that of his children's because of the effects of climate change in his country, barely two metres above sea level.

The tribunal rejected his claims and confirmed his deportation order after holding that the Refugee Convention gave no protection to those claiming to be endangered by climate change.

But the president of the partly public-funded Refugee Council of Australia, Phil Glendenning, who was in Kiribati in March, says Australia needs to formally recognise climate change refugees because there's "a big chance" that climate change in the Pacific would force large numbers of people from their homelands.

Glendenning says Australia should prepare to cater for thousands of climate change refugees over and above the 20,000 refugees it admits from war-torn nations every year.

"These are people who are not suffering from persecution because of their beliefs, race or because they belong to a particular group. So they don't meet the Refugee Convention criteria but, nevertheless, there will be a need for people to be resettled because they have been displaced by climate change," says Glendenning. "This is a new cohort of people who are emerging, the rest of the world needs to pay attention."

Australia's Labor government – trailing massively in opinion polls and facing an election in September at which the increased numbers of asylum seekers is expected to be a hot issue – is unlikely to agree to increase its refugee intake before the election.

The opposition, a Liberal-National coalition that is expected to unseat Julia Gillard, has vowed to cut Australia's intake by 6,000 places upon coming into office.

Glendenning, however, says he has raised the need for a special category of climate change refugees in talks with senior officials in the Australian Department of Immigration and Citizenship.

"This is beginning to emerge as an international issue ... the Department of Immigration didn't rule it out, of course. It didn't get a negative hearing, it's [a proposal] very much in its infancy."

Kiribati, formerly part of the British-administered Gilbert and Ellice Islands, straddles the equator. Its 33 tiny atolls and islands – many of which are uninhabited – extend for 5,000 kilometres across the Pacific Ocean. Most are extremely low-lying and the country's main atoll of Tarawa is now dangerously overcrowded as more people from outer islands flock to Tarawa seeking work and protection from climate change.

Kiribati's president, Anote Tong, a graduate of the London School of Economics, has told his people that many should prepare to leave under a policy he terms "migration with dignity". Last month he announced that Kiribati would purchase 3,000 hectares of agricultural land in Fiji to grow food and as an investment. He has denied that he plans to send people there to live.

President Tong, who has long campaigned for greater international recognition and aid for his country's plight, told the Global Mail that despite frantic efforts within Kiribati to stem the effects of climate change – by building sea walls and protecting fresh water supplies – his people would have to migrate to survive. He says Kiribati will increase its efforts to train and educate its young people so that they have a greater chance of making a new life in a different country.

"For our people to survive, then they will have to migrate," says president Tong. "Either we can wait for the time when we have to move people en masse or we can prepare them – beginning from now ..."