The Nov. 24 blaze in Bangladesh killed 112 garment workers and increased pressure on Wal-Mart and other Western retailers to help improve factory conditions and take more direct responsibility for their suppliers. Clothing bound for Wal-Mart and Sears was found in the charred ruins. Both companies have said suppliers used the Tazreen factory without their permission and were fired. 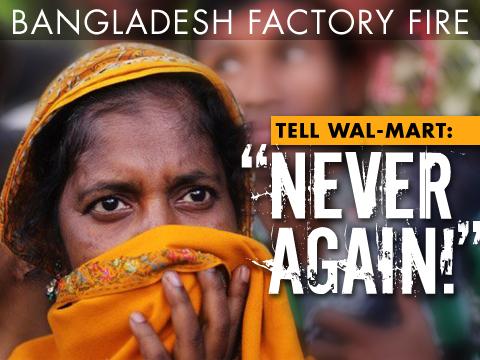 Wal-Mart Stores Inc. (WMT) and Sears Holdings Corp. (SHLD) have so far declined to join Li & Fung Ltd. and other companies in voluntarily compensating victims of a fire last year at a Bangladesh garment factory.

Wal-Mart and Sears also didn’t respond to an invitation to attend a meeting today in Geneva, where companies whose clothing was manufactured at the Tazreen Design Ltd. factory are expected to discuss compensation payments, said Scott Nova, executive director of the Worker Rights Consortium, a Washington-based international labor-monitoring group.

The Nov. 24 blaze killed 112 workers and increased pressure on Wal-Mart and other Western retailers to help improve factory conditions and take more direct responsibility for their suppliers. Clothing bound for Wal-Mart and Sears was found in the charred ruins. Both companies have said suppliers used the Tazreen factory without their permission and were fired. Sears and Wal-Mart, which don’t directly employ workers in Bangladesh and are not legally obligated to compensate them, have instituted worker-safety programs there.

“It’s so important for Western retailers to be at this meeting,” said Kalpona Akter, executive director of the Bangladesh Center for Worker Solidarity, who was in the U.S. last week to ask Wal-Mart to do more to help make Bangladesh factories safe. “If they’re not there, they’re totally giving the message that they are supporting these death traps and they really don’t care how many lives go to make these clothes.”

Labor-rights groups say about 700 workers have died since 2005 at factories in Bangladesh, which the website of the Bangladesh Garment Manufacturers and Exporters Association says is the world’s second-largest apparel exporter after China. Textiles account for about 80 percent of Bangladesh’s exports.

The compensation payments would go to the families of the workers who died in the Tazreen fire and the more than 100 who were injured, Nova said. At least 1,100 workers were employed at the factory and about 600 were there at the time of the fire, said Nova, citing information provided by the Clean Clothes Campaign, an Amsterdam-based advocacy group.

Sears, which is based in Hoffman Estates, Illinois, has no plans “to attend the meeting in Geneva,” Howard Riefs, a company spokesman, said in an e-mailed statement. “As part of our ongoing efforts, we are continuing to actively train our suppliers on factory and fire safety as part of our Global Compliance Program.”

Kevin Gardner, a Wal-Mart spokesman, didn’t answer questions about plans for the meeting or victim compensation.

“At Walmart, our goal is to positively impact global supply chain practices by raising our own standards and by partnering with other stakeholders to improve the standards for workers across the industry,” Gardner said in an e-mailed statement. “Walmart has been advocating for improved fire safety with the Bangladeshi government, with industry groups and with suppliers. We have been actively developing and implementing proactive programs to raise fire safety awareness and increase fire prevention.”

Wal-Mart on April 9 announced a $1.6 million donation to the Institute of Sustainable Communities, a U.S. non- governmental organization, to establish an entity called the Environment, Health and Safety Academy in Bangladesh. The school will offer fire safety training to Bangladesh apparel manufacturers, Wal-Mart said in a news release.

Nova said the donation was “of dubious value” because many factories lack such basic features as fire escapes and that “$1.6 million is a meaningless sum relative to what is actually needed to make the industry safe.”

Li & Fung, (494) a Hong Kong-based exporter, has agreed to pay $1,280 to the family of each worker who died and to each injured worker via a fund set up by the Bangladesh Garment Manufacturers and Exporters Association. A separate foundation will fund the education of victims’ children, Katherine Wang, a company spokeswoman, said in an e-mailed statement.

“We’re continuing our dialogue with the industry in Bangladesh to determine what else we can do to help,” Wang said.

European retailer C&A said it has donated $1,200 per family via its foundation. The company also committed to providing monthly payments of $50 to the children of the dead.

Italian retailer Piazza Italia agreed to “participate fully in whatever compensation plan is agreed at the meeting” but declined to attend, Nova said.

On April 12, Tazreen survivor Sumi Abedin and Akter visited Wal-Mart headquarters in Bentonville, Arkansas, to deliver a petition urging the company to attend the Geneva meeting and help improve worker safety. A survivor of a 1990 factory fire in Bangladesh, Akter appealed at the retailer’s 2011 annual shareholder meeting for Wal-Mart to publish its factory audit reports. Abedin broke an arm and leg and suffered a head injury in the Tazreen fire.

The petition has been signed by more than 112,000 consumers worldwide, according to the Corporate Action Network, a Washington-based watchdog group that has helped coordinate the trip.

The workers-rights advocates are petitioning companies to sign a contractually enforceable memorandum that would require them to pay Bangladesh factories enough to cover costs of safety improvements. So far, PVH Corp. (PVH), owner of the Tommy Hilfiger brand, and German retailer Tchibo are the only ones to sign the agreement, which also would require companies to provide accurate and regularly updated lists of their approved suppliers and subcontractors in Bangladesh.

It won’t take effect until four major retailers sign on.

To contact the reporter on this story: Renee Dudley in New York at rdudley6@bloomberg.net

To contact the editor responsible for this story: Robin Ajello at rajello@bloomberg.net