Before Housing Bubbles, There Was Land Fever

Since 1997, we have lived through the biggest real estate bubble in United States history — followed by the most calamitous decline in housing prices that the country has ever seen. Fundamental factors like inflation and construction costs affect home prices, of course. But the radical shifts in housing prices in recent years were caused mainly by investor-induced speculation. Previous events were fundamentally different from the recent housing bubble. 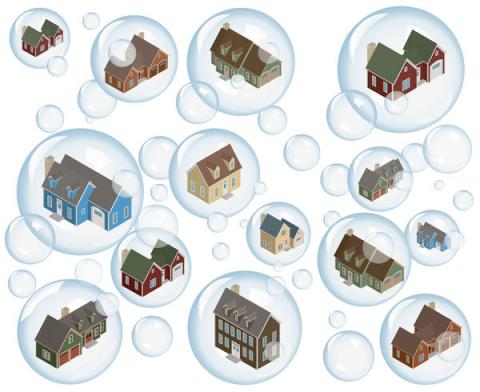 SINCE 1997, we have lived through the biggest real estate bubble in United States history — followed by the most calamitous decline in housing prices that the country has ever seen.

Fundamental factors like inflation and construction costs affect home prices, of course. But the radical shifts in housing prices in recent years were caused mainly by investor-induced speculation.

Anyone contemplating the purchase of a home wants an idea of where prices will be when it is eventually time to sell, perhaps many years later. For that kind of long-term forecasting, we need to understand the reasons for the recent, violent price cycle, and whether it is likely to repeat itself.

History has much to teach us about real estate bubbles, and some of it is reassuring. The land booms of New York State in the 1790s, Kansas in the 1850s, California in the 1880s and Florida in the 1920s all appear to have been relatively isolated events. And the cycle was not repeated in short order.

But those events were fundamentally different from the recent housing bubble. As relatively local phenomena, involving a fairly small number of adventurers, they did not consume most people’s attention. And a major cause can be easily identified: they developed from the promotion of supposedly valuable lots of land.

In fact, outside of New York City and a few urban centers, most speculators in past decades didn’t focus much on home prices. The term “housing bubble” was not even in their vocabulary. Land, not houses, was the object of their desires. They had “land mania” or “land fever.”

In a 1932 book, “The Great American Land Bubble,” Aaron M. Sakolski offers a vivid history of these manias, going back hundreds of years. There were repeated examples of promoters creating land subdivisions with vaunted plans for development, and advertising campaigns to sell them to investors.

As president in the 1790s, George Washington helped promote the sale of lots in his namesake capital city, and even bought some himself. Earlier in his life, he was a surveyor, and in 1763, he was a founder of the Mississippi Land Company, which was to acquire land, survey and subdivide it, and sell off individual farm and town plots to settlers. While his involvement in the development of Washington, D.C., was ultimately successful, his earlier company failed.

Land fevers tend to have a definite starting point and vector of contagion: they begin when a promoter subdivides land into lots small enough for many investors, and are usually accompanied by an advertising blitz with glowing descriptions of the future town and country, setting off a buzz and speculative excitement.

The Florida land bubble of the 1920s provided a turning point in public opinion, thanks to newspaper reporting around the country that made it clear that a mania was being artfully promoted. Anne O’Hare McCormick wrote in The New York Times in 1925: “What impressed me most was that every jungle and swamp and palmetto hummock from Lake City to Key West is staked out in city lots and offered for sale as building sites.” Such colorful writing can have a lasting impact. Many people now remember the image of the trusting Northerner unwittingly buying a lot in a Florida swamp. And the whole enterprise of subdivision, advertising and promotion of empty lots for sale, which made the manias possible, faded.

Shady operators were called purveyors of “premature subdivisions” and “defunct subdivisions.” Local regulators came to demand that development plans were at least intended to produce homes that people would actually live in, not sham operations to defraud ignorant investors.

The first widely documented, nationwide speculative fever attached to single-family homes, as opposed to lots, was in the housing boom of 1943 to 1950. But home prices remained relatively quiet for many years thereafter. Starting in the 1970s, home price bubbles became more frequent and severe. By the end of the 20th century, housing speculation became at least a pastime for many Americans.

THE great housing bubble of the 2000s was diffused widely through the population and didn’t owe its beginnings to any single promotional scheme. The bubble became so big apparently because of a number of kinds of financial promotion — of subprime mortgages, no-down-payment mortgages, securitized mortgages and other innovations.

It was also driven by confusion about supply: people without much experience with housing bubbles seemed to accept the old real estate argument that because land is finite, its price must rise. And they may have thought that when they bought a home, they were primarily investing in land.

If so, they were wrong, but not by as much as they would have been in previous decades. According to a 2007 study by Morris Davis of the University of Wisconsin and Jonathan Heathcote of the Federal Reserve Bank of Minneapolis, the share of nonfarm home value accounted for by land rose to 36.4 percent in 2000 from 15.3 percent in 1930. In an update, they put the percentage at 23.7 percent in the third quarter of 2012.

In fact, except in some densely populated areas, the value of a home has always been mostly in the structure, not the land. But because land’s fraction was rising until recently, people may have been deluded into thinking that investments in housing and land were one and the same.

By 2000, many people appeared to have forgotten that when home prices rise sharply, builders are likely to increase the supply, which tends to bring prices back down. We had such a supply response in the 2000s, and with a vengeance. In the near future, at least, while a speculative investing culture may re-emerge among homeowners, it is likely to be tempered by the memory of crashing prices.

Housing prices themselves aren’t the only speculative factors relevant to the housing market. Speculation in the bond or mortgage market counts as well.

Interest rates have been declining for decades now. Clearly, that cannot continue on the same track for another 10 years, because rates would have to turn negative.

But, of course, inflation can rise — and it’s easy to imagine that both it and interest rates will rise substantially, creating a bonanza for home buyers who have already locked in low rates. And because rates are so low now, they could climb a lot once they turn.

In short, it’s quite possible that the next decade might bear a resemblance to the 1960s or ’70s, when inflation and interest rates kept surprising people on the upside, culminating in 18 percent rates on 30-year mortgages in 1981, and inflation that was almost as high.

Homeowners did very well if they bought in 1960 or 1970, locked in low fixed-rate mortgages and saw the nominal values of their homes soar while their real mortgage balances declined. (Buyers since then have generally not fared as spectacularly.)

A more moderate path is also possible: without going back to the extremes of the ’60s or ’70s, higher fixed-rate mortgage rates might return.

With rates now relatively low, this could be an auspicious time to buy a house with a fixed-rate mortgage. That could make good sense for people who aren’t out to bet on the housing or mortgage markets but are instead focused on settling into a home for the long term.

Next week: demographic and cultural factors. Robert J. Shiller is Sterling Professor of Economics at Yale.