The United States Shows its Contempt for Venezuelan Democracy

Washington's clumsy efforts to de-legitimise Venezuela's election mark a escalation of its push for regime change. 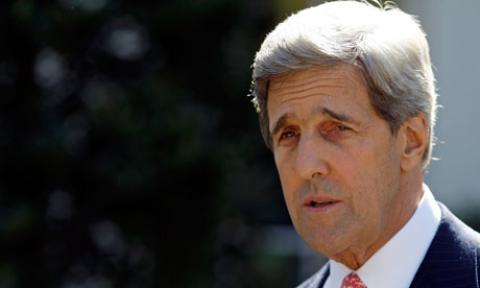 US secretary of state, John Kerry, has called for a recount of Venezuela's presidential ballot., Haraz N Ghanbari/AP

While most of the news on Venezuela in the week since the 14 April presidential election focused on the efforts of losing candidate Henrique Capriles to challenge the results, another campaign, based in Washington, was quite revealing – and the two were most definitely related. Without Washington's strong support – the first time it had refused to recognise a Venezuelan election result – it is unlikely that Capriles would have joined the hardcore elements of his camp in pretending that the election was stolen.

Washington's efforts to de-legitimise the election mark a significant escalation of US efforts at regime change in Venezuela. Not since its involvement in the 2002 military coup has the US government done this much to promote open conflict in Venezuela. When the White House first announced on Monday that a 100% audit of the votes was "an important, prudent and necessary step", this was not a genuine effort to promote a recount.

It amounted to telling the government of Venezuela what was necessary to make their elections legitimate. They also had to know that it would not make such a recount more likely. And this was also their quick reply to Nicolás Maduro's efforts, according to the New York Times of 15 April, to reach out to the Obama administration for better relations through former Clinton energy secretary, Bill Richardson.

But the Obama team's effort failed miserably. On Wednesday, the government of Spain, Washington's only significant ally supporting a "100% audit" reversed its position and recognised Maduro's election. Then the secretary general of the Organisation of American States (OAS), José Miguel Insulza, backed off his prior alignment with the Obama administration and recognised the election result.

It was not just the left governments of Argentina, Brazil, Ecuador, Bolivia, Uruguay and others that had quickly congratulated Maduro on his victory; Mexico, Colombia, the Dominican Republic, Guatemala, Haiti and other non-left governments had joined them. The Obama administration was completely isolated in the world.

Washington's clumsy efforts also helped highlight the election as an issue of national sovereignty, something that is deeply cherished in the region. "Americans should take care of their own business a little and let us decide our own destiny," said Lula da Silva at a rally in Brazil. Of course, there were screaming ironies: George W Bush "defeated" Gore in 2000, losing the popular vote and "winning" Florida officially by perhaps 900 votes with no official recount.

But the demand for a recount in Venezuela was farcical from the beginning. Voters mark their choice by pressing a touch screen on a computer, which prints out a receipt of the vote. The voter checks the receipt and deposits it in a ballot box. When the polls close, 53% of the machines are randomly selected and their results compared with the paper, in front of witnesses from all sides. There were no reports of mismatches, so far not even from the opposition camp.

The opposition representative on the national electoral council, Vicente Díaz, acknowledged that he had "no doubt" that the vote count was accurate. "No doubt" is an understatement. My colleague David Rosnick calculated the probability that extending the audit to the remaining 47% of machines could change the result of the election: about one in 25 thousand trillion.

On Thursday night, Venezuela's CNE agreed to do a complete audit of the remaining votes and Capriles called off his protests. But it's not clear what the audit entails. The legal vote in Venezuela is the machine vote (as in parts of the United States where there is electronic voting); the paper receipt is not a vote, and it's not clear that it would be possible to audit the remaining votes in the way that the first 53% were audited on site.

On Wednesday, secretary of state John Kerry, affirming before Congress the US refusal to recognise Venezuela's elections, referred to Latin America as the United States's "back yard". Oops. Well, the contempt was obvious anyway, no?