The Venezuelan election was nearly stolen – by the US-backed anti-Chávistas. How? That’s what Chávez wanted Maduro to find out from me: how could US operatives jerk with Venezuela’s voter rolls? It wasn’t a mere policy question: they knew Chávez wouldn't be allowed to survive through another coup. My answer: They could steal the vote the same way Bush did it in Florida – in fact, using the very same contractor. Take a look at these documents. 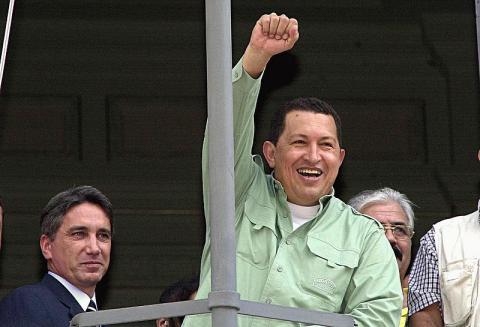 Hugo Chávez in 2003, the year after his kidnapping., Victor Soares/ABr

The guy in the cheap brown windbreaker walking up the dirty tenement steps to my New York office looked like a bus driver.

And this week, the US State Department is refusing to accept the result, suggesting Maduro hijacked the vote count. But did he?

Maduro came to me that day in 2004 on a quiet mission, sent by President Hugo Chávez to give me information I needed for my investigation for Rolling Stone – and to get information from me that might save Chávez’s life.

The central topic was the “Invisible Ring”. Venezuelan intelligence had secretly taped US Embassy contractors in Caracas talking in spook-speak: “That which took shape here is a disguised kind of intelligence… which is annexed to the third security ring, which is the invisible ring.”

(“Invisible Ring”? Someone at the State Department has read too many Alan Furst novels.)

“Mr Corey” was certainly not from the CIA, an agency holding on to one last fig-leaf of discretion. This crew was far more dangerous, from a spy-for-hire corporation, Wackenhut Inc. I’d been tracking Wackenhut for years, ever since their spies – more Austin Powers than James Bond – were arrested while on a black-bag job for British Petroleum. They’d attempted to illegally tape a US Congressman by running a toy truck with a microphone through the ceiling vents over the lawmaker’s head.

But even clowns, when heavily armed, can be deadly. In 2002, Chávez was kidnapped with the blessing of the US Ambassador right out of the presidential palace and flown by helicopter over the Caribbean where, Chávez later told me, the President assumed he’d be invited for a swim from 2,000 feet. Instead, just 48 hours later, Chávez was back at his desk.

First, US operatives would monkey with voter registrations – and if that didn’t steal the election from Chávez’s party, the next step was to provoke riots against Chávez’s elections “theft”. The riots would lead to deaths – the deaths would be the excuse for the US to back another coup d’etat to “restore order” and “democracy” in Venezuela – and restore Venezuela’s oil to Exxon. (Chávez had seized majority control of the oil fields and Exxon was furious.)

Would this be to justify another coup?

“Yes: The justification to tell the world Chávez is a murderer, Chávez is a dictator, Chávez is a terrorist and the OAS [Organisation of American States] should intervene and Chávez should be ousted.”

This week, the warlords of the rings are back in Caracas as, per the original script, the US State Department is backing opposition claims (no details provided) that Maduro’s win is in question. And per the old playbook, the losers are taking to the streets, seven voters are dead (mostly Chávistas, but not all) and Caracas waits for the coup’s next boot to drop.

Is a manoeuvre to remove Maduro far-fetched? George W Bush promoted the botched kidnapping of 2002. But it was the progressive Barack Obama who, newly elected President, blessed the overthrow of the elected president of Honduras, Manuel Zelaya.

Answer: They didn’t have to. Even the Wall Street Journal accepts that, “for a majority of Venezuelans, Mr Chávez was a messiah,” and Maduro, the successor Chávez chose from his deathbed, had too big a lead to lose.

Still, the election was nearly stolen – by the US-backed anti-Chávistas.

How? That’s what Chávez wanted Maduro to find out from me: how could US operatives jerk with Venezuela’s voter rolls? It wasn’t a mere policy question: they knew Chávez wouldn't be allowed to survive through another coup.

My answer: They could steal the vote the same way Bush did it in Florida – in fact, using the very same contractor. Take a look at these documents… from the pile I reviewed with Maduro:

The FBI memo detailing the shoplifting of Venezuela's voter rolls. (Click to enlarge.)

According to this once-secret FBI memo, ChoicePoint Corp – under a no-bid contract – had shoplifted Venezuela’s voter rolls, as well as the voter rolls of Argentina, Brazil, Nicaragua, Mexico and Honduras, all of whom were on the verge of electing presidents from the political left.

I did ask myself how our national security apparatchiks could say that filching these voter rolls made our nation more secure? What were they for?

I had little doubt. In November 2000, working for the Observer and BBC Newsnight, I discovered that a subsidiary of ChoicePoint had, for Governor Jeb Bush of Florida, obtained his state’s voter rolls and “purged” more than 56,000 voters, the vast majority black and poor, illegally denying them their vote. And that was how Jeb’s brother, George W, won the US presidency by just 537 ballots.

And now ChoicePoint had the data to allow Homeland Security to do a Florida on Venezuela – and Honduras and the others. (In 2006, the candidate of the left, Andrés Manuel López Obrador, won the election but lost the presidency through gross ballot-box finagling.)

Chávez himself read my findings on potential elections theft – to his nation on his TV show – and then he moved swiftly, establishing an election system that Jimmy Carter, who has headed vote observer teams in 92 nations, called, “an election process that is the best in the world".

Here’s how it works: every Venezuelan voter gets TWO ballots. One is electronic, the second is a paper print-out of the touch-screen ballot, which the voter reviews, authorises, then places in a locked ballot-box. An astounding 54 percent of the boxes are chosen at random to open and check against the computer tally. It’s as close to a bulletproof count as you can get.

Still, the loser bitched and – his bluff called – was allowed to pick all the precincts he wanted – 12,000 – to add to the audit.

And that’s why the US State Department then has to turn to the threat of bullets and “Third Ring” mayhem in the streets – to undermine the legitimacy of the new Maduro government and signal the US willingness to support a new coup.

It won’t succeed this time, either. The populist socialist governments that the US couldn't remove have now replaced the juntas and stooges that once gave the US control of the Organisation of American States. And Venezuelans themselves won’t let it happen.

What impressed me about Maduro and his boss Chávez was their reaction to the Third Ring and the attempted Florida-tion of their election. Instead of ordering mass arrests, their response was to strengthen democracy with a no-tricks voting system.

I should note that ChoicePoint, once exposed, apologised to Mexico’s government, agreed to destroy its ill-gotten voter rolls and, soon thereafter, sold itself to a credit-rating company. Wackenhut fired its goof-ball spooks and sold itself off in pieces. Both deny knowingly breaking laws of any nation. And in Bush’s US State Department, all hell broke loose, as UN Ambassador John Negroponte, sources verified, fumed over what he deemed a renegade neo-con escapade endangering remaining US oil interests. (In fact, Chevron ended up paying what I call a “coup tax”.)

The vote was still close, mainly because Maduro – a sincere, competent administrator – is no singing-dancing-camera-perfect Sinatra of politics like Chávez was.

Secretary of State Kerry’s challenge to Maduro’s 270,000-vote victory margin struck me as particularly poignant. Because in 2004, besides Chávez, I gave another presidential candidate evidence of the Bush gang’s ballot banditry: Senator John Kerry. Kerry lost to Bush by a slim 119,000 in Ohio, blatantly stolen, but Kerry refused to call for a recount. It took him two years to publicly acknowledge our findings – when he introduced, with Senator Ted Kennedy, legislation to fix America’s corrupted voting system, then let the proposed law die of neglect.

Chávez knew, and Kerry will never learn, that democracy requires more than a complete count – it requires complete courage.

For one more week, readers of VICE can download Palast’s short documentary, The Assassination of Hugo Chávez, originally filmed in Venezuela for BBC, without charge.

Greg Palast is a New York Times bestselling author and fearless investigative journalist whose reports appear on BBC Newsnight and in The Guardian. Palast eats the rich and spits them out. Catch his reports and films at www.GregPalast.com, where you can also securely send him your documents marked, "confidential". Follow Greg on Twitter: @Greg_Palast