D.C.’s Race Disparity in Marijuana Charges Is Getting Worse

According to arrest numbers obtained from the Metropolitan Police Department and crunched by a statistician, between 2005 and 2011, D.C. cops filed 30,126 marijuana offense charges. A staggering number of those—27,560, or 91 percent—were filed against African-Americans. Only 2,097 were filed against whites. Folklore contends that pot-arrest asymmetries are about Blacks smoking outside and getting their getting their pot on street corners. Recent studies contradict that. 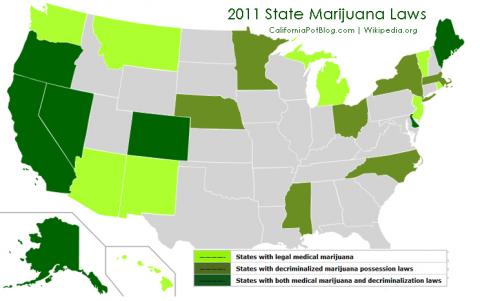 This weekend, dozens of marijuana activists converged on the National Mall to celebrate 4/20 and push for the drug's legalization. If photos and videos are any indication, most of the attendees were white. As a black man, I find their efforts laudable and hearteningly altruistic. D.C.'s campaign against marijuana is racist. If it wasn't, District marijuana enforcement would look a lot less abominable.

In 2010, I wrote about how Jon Gettman, a public policy professor at Shenandoah University, pored through the city's 2007 marijuana arrest records to discover the District had arrested more pot offenders per capita than any other jurisdiction in the country. Gettman also found that the overwhelming majority of pot miscreants the city went after that year—91 percent—was black.

His analysis suggested yet another black-white divide (like the one for income and the one for achievement) driving through the federal city. In 2007, a black person was eight times more likely to be arrested for a District marijuana offense than a white person, even though researchers have exposed what any college pot dealer can tell you from the comfort of his Barcalounger: Members of both racial groups consume cannabis at nearly equal rates.

D.C.'s dope divide is just as striking when you zoom out. According to arrest numbers obtained from the Metropolitan Police Department and crunched by a statistician, between 2005 and 2011, D.C. cops filed 30,126 marijuana offense charges. A staggering number of those—27,560, or 91 percent—were filed against African-Americans. Only 2,097 were filed against whites.

Blame-the-victim folklore contends that pot-arrest asymmetries, which show up in various cities around the country, are about blacks smoking outside and getting their pot on street corners. Recent studies contradict that. And if D.C.'s shameful pot disparity was about anything but racial bias, we'd see it narrowing.

Instead, though the number of black and white pot charges filed fluctuated from year to year, reefer charges filed against blacks rose 6 percent and declined 10 percent for whites between 2005 and 2011.

Over the last decade, the federal city's black population has wavered as its white population shot up. If municipal pot arrests were impartial, that should have equaled more white potheads learning what the inside of a squad car looked like as arrests of black potheads became scarcer. Latinos, moving into the city in steady if not overwhelming numbers, for instance, saw their pot arrests rise 40 percent between 2005 and 2011, from 93 pot charges to 153.

Also, at a time when weed has become another chic amenity, there's a good chance that the city's affluent whites have most of D.C.'s stash. Last year, Washingtonian ran a gleeful article about the massive amount of weed rambling through D.C.'s elite neighborhoods courtesy of drug-dealing stroller moms and tony pot-delivery services. D.C. Urban Institute criminologist John Roman thinks that's a likely scenario: “What I always say on that is, look, drugs are what economists call a normal good, which means that the more money you make, the more of the product you buy.”

The only politician explicitly working to address the dope divide is longshot at-large D.C. Council candidate Paul Zukerberg, who's made marijuana decriminalization part of his platform. He attributes the disparity to cops using stop-and-frisk powers on young black males. "In D.C., we’re giving young people twice as many marijuana arrests as high school diplomas," he writes on his website.

Other D.C. politicians I contacted, like Mayor Vince Gray, wouldn't comment on the matter or didn't return messages. But when I mentioned the dope divide to Police Chief Cathy Lanier (who told the Washington Post she’d tried weed as teen) during an email exchange last year, the top cop seemed concerned. “Broad statement,” she wrote. “Mixed feelings on enforcement here...”

When I tried to get Lanier to say more, she referred me to her spokesperson, who told me that MPD doesn't insert itself into politics.