The latest sweatshop disaster in Bangladesh, which claimed the lives of over 200 young women, calls into question the foundations of US globalization policies since the Clinton era. It is not enough to blame the corruption of Bangladesh factory owners, nor sufficient to suggest better training and factory codes from Walmart or the Gap. It is time to ban the US sale of garments made in Bangladesh until enforceable labor codes are imposed on that country. 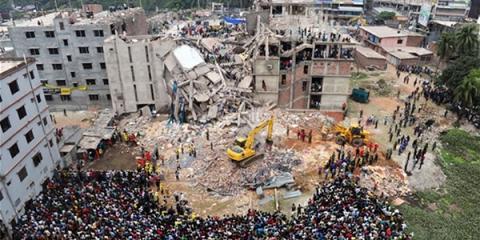 Rescuers search for garment workers trapped in the rubble of an eight-story building that collapsed outside Dhaka, Bangladesh, April 25, 2013.,

The latest sweatshop disaster in Bangladesh, which claimed the lives of over 200 young women, calls into question the foundations of US globalization policies since the Clinton era. It is not enough to blame the corruption of Bangladesh factory owners, nor sufficient to suggest better training and factory codes from Walmart or the Gap. It is time to ban the US sale of garments made in Bangladesh until enforceable labor codes are imposed on that country.

But US policy, since the 1990s globalization era began, has been a march away from labor protections and the adoption of so-called “free market” models. Since the Clinton era a whole new generation of liberal free-marketers has dominated the blogosphere, think tanks, and the staffs of Congress. As one example, take Matthew Iglesias who writes for Salon and the Center for American Progress:

“Bangladesh may or may not need tougher workplace safety rules, but it’s entirely appropriate for Bangladesh to have different—and, indeed, lower—workplace safety standards than the United States…(and) This is the stuff progress is made of.”

Just as many otherwise-progressives defend military intervention in places like Libya as “humanitarian,” so they typically favor corporate investment in sweatshops as the stepping-stone to higher wages for those workers in the future. Many a Hollywood celebrity has been used in enticing advertisements for this supposedly new and improving globalized economy. Millions of liberal voters ignore the inconvenient truth that young Third World workers, earning a dollar-per-day for 14 hours labor, without union protection or benefits, manufacture their iPads and trendy clothes.

When the new anti-sweatshop movement emerged during the Clinton era, a split developed over proposed remedies. The liberal Democrats tended to embrace the corporate view that market solutions were best. Thus the Clintonites created voluntary compliance mechanisms, such as the Fair Labor Association (FLA), in which companies themselves were left responsible for the often-illegal behavior of their suppliers; the monitoring of workplace safety was strictly voluntary, and the companies held reports of the monitors as private proprietary information. Millions of corporate dollars flowed into campaign contributions to keep politicians compliant and into dazzling star-studded ads promoting the brands as cheap and sexy.

There was an alternative, the Workers Rights Consortium (WRC), backed by student and labor groups, demanding enforceable codes of conduct – known as sweatfree standards – where consumer products were made in low-wage countries from Bangladesh to Central America. With student-labor support, the WRC made inroads in worker protection and consumer awareness, but never enough to offset the main drift toward market voluntarism.

It was difficult work. When I spent one year pushing sweatfree standards into the California procurement codes, the legislation (SB 1888) banned procurement of goods produced by “extreme forms of child labor” but the requirement for a non-poverty was stricken by liberal representatives of the governor’s office. Similarly, when I spend two years advocating for sweatfree ordinances in San Francisco and Los Angeles, we achieved greater monitoring and disclosure information, but San Francisco cut key provisions out of deference to companies like the Gap.

In 2009, along with the City Project’s Robert Garcia, I met also with Labor Secretary Hilda Solis to propose a federal grants program to cities adopting enforceable sweatfree ordinances. Solis’ top policy staffer expressed great interest in the idea – “you’ve made the cut” of new ideas, she said – but the proposal quickly perished from institutional indifference.

Global agencies like the World Trade Organization (WTO) insist on enforceable, not voluntary, protections for private corporate investment but long-standing institutions like the International Labor Organization (ILO) are limited to education about their minimal labor standards.

Even communist states like China accept the notion that cheap labor brings a “competitive advantage” in the world economy. When their workers rise up for livable wages, American and European multi-national corporations pull out and relocate in Vientam, Cambodia, or Bangladesh where conditions are even worse. Huge sums are at stake. Bangladesh alone makes $18 billion annually from its clothing exports.

“History shows that unions can make a big difference in improving working conditions,” the New York Times editorial on Bangladesh notes. Well said, but the Times has long been a leader in promoting corporate globalization. It is past time for the Times to advocate meaningful labor standards in any procurement or tax-incentive policies receiving American taxpayer support. Otherwise, the infamous “race to the bottom” will continue, and the bottom means fiery hell for young women.