How the CIA’s Fake Vaccination Campaign Endangers Us All

The U.S. was wrong to use health workers to target Osama bin Laden. 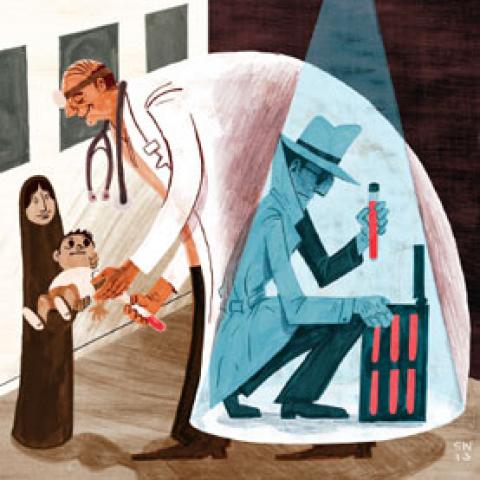 Not long after midnight on May 2, 2011, U.S. Navy SEALs attacked a three-story compound in Abbottabad, Pakistan, raced to the main building's top floor and killed Osama bin Laden. Few mourn the man responsible for the slaughter of many thousands of innocent people worldwide over the years. But the operation that led to his death may yet kill hundreds of thousands more. In its zeal to identify bin Laden or his family, the CIA used a sham hepatitis B vaccination project to collect DNA in the neighborhood where he was hiding. The effort apparently failed, but the violation of trust threatens to set back global public health efforts by decades.

It is hard enough to distribute, for example, polio vaccines to children in desperately poor, politically unstable regions that are rife with 10-year-old rumors that the medicine is a Western plot to sterilize girls—false assertions that have long since been repudiated by the Nigerian religious leaders who first promoted them. Now along come numerous credible reports of a vaccination campaign that is part of a CIA plot—one the U.S. has not denied.

The deadly consequences have already begun. Villagers along the Pakistan-Afghanistan border chased off legitimate vaccine workers, accusing them of being spies. Taliban commanders banned polio vaccinations in parts of Pakistan, specifically citing the bin Laden ruse as justification. Then, last December, nine vaccine workers were murdered in Pakistan, eventually prompting the United Nations to withdraw its vaccination teams. Two months later gunmen killed 10 polio workers in Nigeria—a sign that the violence against vaccinators may be spreading.

Such attacks could not come at a worse time. The global polio campaign has entered what should be its final stages. The number of cases has dropped from 350,000 in 1988 to 650 in 2011. The disease spreads naturally in only three countries—Afghanistan, Pakistan and Nigeria—down from more than 125 countries a quarter of a century ago. Disrupting or postponing vaccination efforts could fan a resurgence of polio around the world.

The distrust sowed by the sham campaign in Pakistan could conceivably postpone polio eradication for 20 years, leading to 100,000 more cases that might otherwise not have occurred, says Leslie F. Roberts of Columbia University's Mailman School of Public Health. “Forevermore, people would say this disease, this crippled child is because the U.S. was so crazy to get Osama bin Laden,” he argues.

The vaccination ruse also poses a moral problem. Physicians take a Hippocratic oath to do no harm. Humanitarian workers adhere to an international code of conduct that requires that their services be provided independently of national agendas, on the basis of need alone. The misguided vaccine program in Pakistan was started in a poor neighborhood of Abbottabad, no doubt to give it an air of legitimacy. Yet after the first in a standard series of three hepatitis B shots was given, the effort was abandoned so that the team could move to bin Laden's wealthier community. This lapse in protocol proves that the best interests of the recipients were not the guiding principle of the effort—while not coincidently betraying the program for the sham it was.

There must be a red line drawn between humanitarian efforts and the machinations of warfare, no matter how unconventional. The costs to future humanitarian endeavors, global stability and U.S. national security of doing otherwise are too high—even when weighed against the liquidation of one of the U.S.'s most fearsome enemies and even if no other option is available. As outlined in a letter signed by the deans of a dozen prominent schools of public health that was sent to the White House, President Barack Obama should direct all U.S. military and intelligence agencies to refrain from using a medical or humanitarian cover to achieve their objectives. Such efforts are bad medicine and bad spy craft. A wise leader would disavow them.

This article was originally published with the title The Spies Who Sabotaged Global Health.