Authorization for Use of Military Force: a blank check for war without end

The Authorization for Use of Military Force (AUMF), passed after the attacks of 11 September 2001, and provides the legal cornerstone for the so-called US "war on terror". It allows the US government to wage war at anytime, any place and on anyone deemed a threat to national security – with remarkably little evidence needed.

May 6, 2013 Michael Shank and Matt Shankworth The Guardian
printer friendly 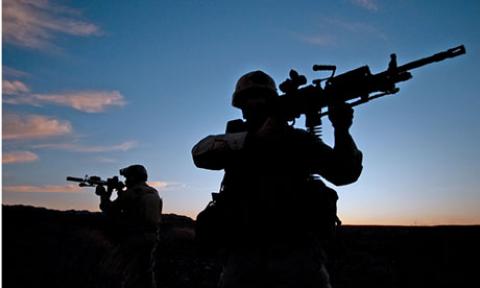 According to a Special Operations Command report, US special forces were active in 92 countries in March 2013., US Navy Photo/Alamy

A handful of Democratic and Republican senators are considering a rewrite of 60 of the most consequential words to ever pass through Congress. The Authorization for Use of Military Force (AUMF), passed after the attacks of 11 September 2001, and provides the legal cornerstone for the so-called US "war on terror". Only one brave Congress member opposed it. It allows the US government to wage war at anytime, any place and on anyone deemed a threat to national security – with remarkably little evidence needed.

The consequential nature of these words is self-evident: the AUMF opened the doors to the US wars in Iraq, Afghanistan and Libya; attacks on Pakistan, Yemen, Somalia and Mali; the new drone bases in Niger and Djibouti; and the killing of American citizens, notably Anwar al-Awlaki and his 16-year-old noncombatant son. It is what now emboldens the hawks on the warpath to Syria, Iran and North Korea.

Rather than doubling down on war policy, as some senators are inclined to do, Congress should repeal the 2001 law. This "blank check" approach to warfare has to stop. And while the rewrite is being framed by members of both chambers (Senators John McCain and Bob Corker, Representative Buck McKeon and others) as an act of congressional oversight, it is doubtful that these hawks will curb any military authority. They have only ever called for more wars, not fewer. That means more Libyas, Yemens and al-Awlaki's.

It is time for members of Congress who truly care about rule of law, oversight and the financial security of this country to speak up. Why? Because, first and foremost, the AUMF continues to contravene congressional oversight. For example, when the Obama administration sent 100 "military advisors" to Uganda in the name of counterterrorism in 2011, Congress received a simple note from President Obama. No oversight.

More recently, after unilaterally negotiating a "status of forces" agreement with Niger, the administration sent a note to Congress saying that it was sending 100 troops to the country. This week, we sent troops to Mali. Again, no oversight.

This is the new normal. Statistics provided by Special Operations Command (pdf) indicate that special forces groups were operating in 92 different countries in March 2013. The AUMF premise, no matter how it gets tweaked, is enabling a system of eternal warfare, a reality that is not only financially untenable for a nation in deep debt, but also ethically indefensible.

Second, the AUMF continues to undermine rule of law. There are clear laws that apply to wartime situations or imminent threats, and a broadened AUMF could undermine these further. That the US already broadly categorizes individuals and groups that are loosely or tacitly associated with extremists – in secret and sometimes without evidence – is already setting a dangerous precedent.

As counterterrorism technologies, like drones, expand, the US and international community may soon see these tactics used in intra-state conflicts, with possible violations of human rights law. If targeted killings by drones are justified as acts of war, they must be subject to international law on the use of lethal force within the borders of another sovereign nation. Without a clear showing of permission to use lethal force within another nation, or an imminent threat from that nation, these killings seriously undermine prohibitions in international law against the use of deadly force.

Third, given the lack of campaign finance reform, too often defense policy is driven not by military strategy or legitimate threats, but by the defense contractor's bottom line. This is the case with the AUMF and the defense industry. The defense industry spent over $130m on lobbying efforts in 2012 alone, and in the first quarter of 2013, weapons maker Northrop Grumman spent $5.8m on Congress, posting its third biggest lobbying quarter in company history.

There's a reason why unnecessary weapons systems like the F-35 joint strike fighter, a program that now costs the American taxpayer hundreds of billions of dollars, never go away. It's the same reason why new systems will be developed to drive policy decisions: money. The industry continues to claim the need for new weapons to face new threats. It is becoming clear that the defense industry's loyalty is first to the financial security of its shareholders, and only secondarily to the security of this country.

It is time to send the 2001 AUMF into the sunset, and to return the checks and balances that policy-makers put in place: the executive and legislative branches must deliberate before waging war. We are making enemies through a feckless, dangerous approach, and it is time to return some censure to our defense apparatus. Otherwise, the AUMF will continue to make us hemorrhage – both blood and, especially, treasure.