Guatemala: Why We Cannot Turn Away

Miles O'Brien reports from Guatemala on forensic science used to document charges of a genocide against thousands of indigenous Mayans in the 80s. From Boing Boing's Xeni Jardin, who co-produced the piece, here's a look at their reporting. 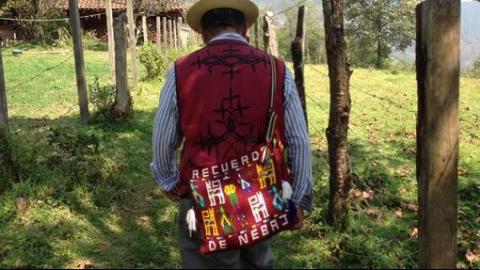 GUATEMALA CITY -- When the trial of Guatemalan General and former de facto head of state José Efraín Ríos Montt and his then chief of intelligence José Mauricio Rodriguez Sanchez began on March 19, 2013, I was in Washington D.C., working with NewsHour correspondent Miles O’Brien on some new science reporting projects in a shared office. The first time I went to Guatemala was around 1989, during the country’s 36-year civil war -- I was a teenager, and the experience was one of the most important and formative of my life. My interest in the peace and justice process following the end of the armed conflict and the lives of the Guatemalan people, has only grown since. So I was happy to learn that Guatemalan independent online media groups were in the courtroom with laptops and modems, live-streaming video and audio of tribunal proceedings.

I tuned in as soon as court opened at 8:30 every morning, Guatemala time. And in our shared D.C. office, over a course of weeks, every day Miles and I worked while listening to audio streaming over the internet from that courtroom far away in Guatemala City. The background audio of our workdays included witness testimonies; defense lawyers yelling at the judges; and elderly Ixil Maya women weeping as they re-told the horrors of being raped, and watching their children, brothers, mothers, and grandfathers be killed.

Both of us were trying to do other work at the time, unrelated to this story. But neither of us could turn away, or turn off the audio, even as the stories grew more graphic, more upsetting, more awful with each witness. Imagine the worst possible thing one human being can do to another. Each testimony was like that, but each in a new and seemingly more horrific way than the last. 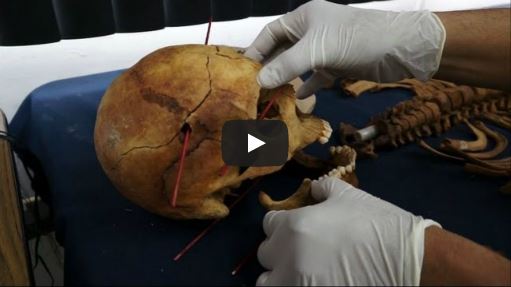 Miles O'Brien and Xeni Jardin report on the role of science and forensics in the Ríos Montt genocide trial in Guatemala.

During one of my trips to Guatemala in the 2000’s, I produced a documentary series for National Public Radio about the role science and technology played in some interesting stories related to peace and justice, and related to social and economic development for the country’s majority population who are poor and indigenous. Some of the episodes focused on entities such as the Guatemalan Forensic Anthropology Foundation (FAFG) and the Project for the Recuperation of the Historic Archives of Guatemala’s National Police (AHPN) -- groups that have produced forensic and documentational evidence that became central to the 2013 Rios Montt genocide tribunal.

Miles and I listened to those 2007 NPR reports together during a long car ride after the genocide trial began. And after we’d listened to the last one together, we agreed that revisiting those projects, those people, and the question of what role science plays in this process -- that all of this would make a really great NewsHour story. And luckily for us, NewsHour agreed.

Within a few days, we were off to New York and Connecticut to interview anthropologist Victoria Sanford, mapping expert Russell Schimmer, and filmmaker Pamela Yates, who famously interviewed Ríos Montt in 1982. That interview was introduced as evidence in the trial, and the General himself watched silently as the video played in the courtroom. 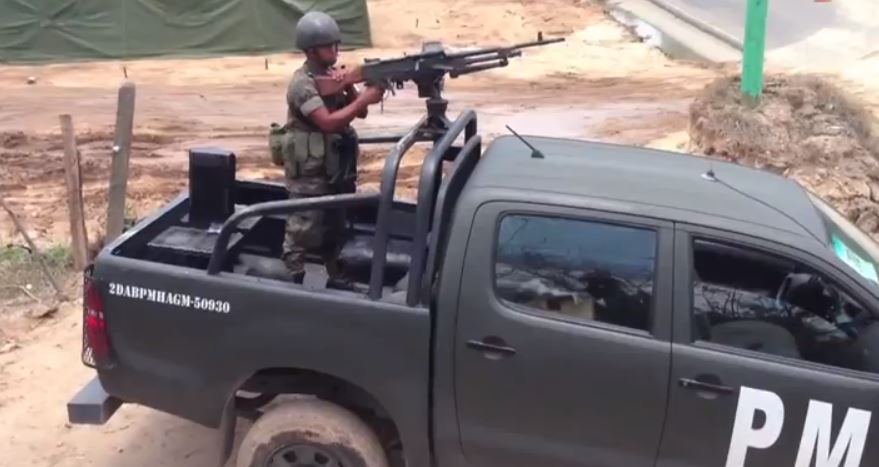 Boing Boing's Xeni Jardin, who co-produced the NewsHour's broadcast report, updates Miles on the status of the genocide trial from a security checkpoint in Casillas, Guatemala.

Then, we flew to Guatemala City, to observe the trial, and interview people on both sides of the genocide debate. Miles spoke with Ríos Montt’s daughter Zury Ríos Montt; and with his longtime advisor Harris Whitbeck -- who ran the regime’s “Frijoles y Fusiles” (Beans and Bullets) aid program in the Guatemalan Highlands, and coordinated support with American Evangelical aid groups, including those led by popular television evangelists Jerry Falwell and Pat Robertson.

Ríos Montt was trained at the U.S. Army’s School of The Americas; the Guatemalan government and Army received funding, military training, weapons, and essential equipment such as helicopters directly from the U.S. (and through our allies: Israel and Taiwan, among others). President Ronald Reagan was a staunch ally of Ríos Montt, even as other lawmakers in Congress and the Senate raised concerns about reports of human rights abuses against indigenous populations. In arguing for more military aid for Guatemala, Reagan once famously said at a 1982 press conference in Honduras that the General had received “a bum rap” on human rights.

View a comprehensive archive of Jardin's coverage of the genocide trial for Boing Boing here.
The question of who is responsible for atrocities that occurred during the Guatemalan civil war is not just a question for Guatemalans.

In Guatemala, we also interviewed people from organizations that produced criminal evidence for the trial, including AHPN and FAFG, and Patrick Ball from the Human Rights Data Analysis Group. Our interviews took place in an increasingly polarized climate in Guatemala; rumors were spreading that some trial witnesses and people involved in the prosecution were receiving threats. Some, we were told, were forced to leave the country out of concerns for safety. Paid 20-page inserts by a pro-Ríos Montt, anti-genocide-tribunal group appeared in each week’s Sunday paper: “The so-called ‘genocide’ trial is a lie perpetrated by neo-Marxist guerrillas enabled by the Catholic Church,” the headlines read.

But the most challenging part of our reporting trip came when we traveled to the Ixil area, to interview Mayan survivors, including a woman who appeared in the tribunal as one of the appoximately 100  “querrelantes,” or criminal witnesses. We spoke with José Ceto Cabo, an Ixil civil war survivor who runs a small NGO that works to aid fellow Ixil survivors, and we listened as seven Ixil men and women from Chajul, Cotzal, Nebaj, and other communties at the center of the genocide trial told us the stories of the atrocities they survived. In the courtroom back in Guatemala City, women covered their faces with traditional woven shawls as a gesture of grief and to hide the overwhelming pain and fear they felt as they re-lived their trauma. In the room in Nebaj where our cameras and lights were set up, this group of men and women chose to show their faces, even as some of them wept and trembled, retelling horrors.

We followed one of these war survivors to her home in San Juan Cotzal. Doña Juana Sanchez Toma offered us coffee grown in a nearby field, cooked over a fire in her dirt-floor hut. Her cat curled up nearby, and a war widow named Doña Inez crushed coffee cherries on a stone metate just outside.

Miles asked Doña Juana if she had any photographs of her family that we might be able to film, to help tell the story. She stepped away, and returned with a weathered, faded print: a smiling teenage girl, and an older woman with a sad, empty expression. The girl was a war orphan their family took in; the older woman was Doña Juana’s mother, who was captured and raped not long after her daughter suffered the same.

“They tied her arms and legs and carried her like a dog, when they kidnapped her from our home,” Doña Juana told us, weeping again. “They held her in the church, and the soldiers, all of them, they raped her for two weeks.”

The photograph was taken after. She soon died, Doña Juana told us, after suffering incalculable physical and psychological trauma.

As we write this blog post, the trial is in its 25th day, after being suspended and restarting and re-suspending a number of times. One of Ríos Montt’s attorneys, Garcia Gudiel, has just screamed at Judge Yassmin Barrios, “I will not rest until you are in prison.” I have been in Guatemala reporting on this story now for more than a month, and each day, it takes some new, unexpected, dramatic turn.

One week ago, President Otto Perez Molina (a former General under Ríos Montt, who was implicated by one of the witnesses in the genocide trial) declared an “Estado de Sitio” (State of Siege) in four communities surrounding a U.S./Canadian-owned Escobal silver mine in San Rafael, just east of the capital. By various accounts, more than 8,000 Army and police troops have been sent in to the Siege zone.

I visited the area last Friday, and observed joint military/police checkpoints and interrogations, spoke to guards at the mine, observed sites where violence had taken place, and spoke to members of indigenous and community groups who say that the military occupation is a re-play of the repressive policies of the miltary during the 1980s.

Being in the “estado de sitio” area reminded me of passing through Army checkpoint zones  during the war. Camionetas, those brightly colored school-buses, were pulled over by soldiers; all passengers ordered off, all identification checked, some questions asked. Back in the ‘80s, I was one of the bus passengers myself. And I remember observing that some people pulled off by soldiers were not allowed to get back on the bus.

Dozens of indigenous leaders held a dramatic demonstration inside the Guatemalan congress yesterday, as lawmakers met to consider ratifying (or not) the State of Siege. “Justice! Justice!,” they shouted in unison, forcing their way into the congressional chamber, “No to militarization! We have suffered enough under the Army! Get out of our pueblos now!”

Miles has been called back to the U.S., and I must leave Guatemala soon, myself. But I don’t want to. The story of these people continues to unfold, and I cannot turn away from it. When I return home, I will be tuned in, just like we were in the early days of the trial.

And I hope, we hope, and they -- many of the Guatemalan people -- hope that you will, too.

Esteban Castaño of Skylight Pictures, contributed to this report.