Lewis won about 80 percent of the votes, soundly defeating a candidate representing a coalition of groups that used to run the union until Lewis took office three years. 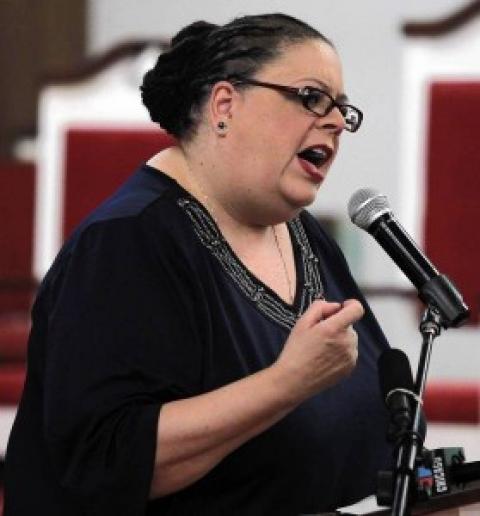 Karen Lewis, the fiery leader of the Chicago Teachers Union who led a strike last year and became a nationally known anti-school reform figure, has been elected to another three-year term as president. Today she will lead the first of three days of protests against Mayor Rahm Emanuel’s plan to close 54 public schools.

The Chicago Sun-Times reported that according to preliminary results, Lewis won about 80 percent of the votes, soundly defeating a candidate representing a coalition of groups that used to run the union until Lewis took office three years.

Last fall, Lewis’s combative governing style won near-unanimous support from rank-and-file members when they voted to strike to protest Emanuel’s reform plans, which included heavily linking teacher evaluation to student standardized test scores and extending the school day. After seven days of canceled classes, the strike ended with both sides claiming some success. Teachers won pay raises and were able to knock down the percentage that evaluations would be linked to scores, while Emanuel got his extended day.

The three-day protest against Emanuel’s school-closure plans kicks off today with what CBS 2 Chicago said was “being billed as the mother of all marches.” The march route will take demonstrators to each of the 54 schools on the closure list.

School district officials say a looming $1 billion deficit is forcing them to close the schools. The teachers union has gone to court to block the closings, arguing that they disproportionately affect African-American students in the district, which is not majority-black, and would harm special education students.Many parents are also concerned about safety issues, because their children will have to walk through violent neighborhoods to get to their newly assigned schools. The district says it is spending $8 million to beef up its Safe Passages Program, but parents remain worried.

Independent hearing officers hired by the school district to evaluate the closing plans concluded that 13 of the targeted schools should stay open for various reasons, including child safety and lack of evidence that the students were being assigned to better schools.