'We Are Movement, Not a Moment': North Carolina Peaceful Uprising Continues

'If you thought you had a fight a month ago, you ain't seen nothing yet,' say protest leaders as 151 arrested 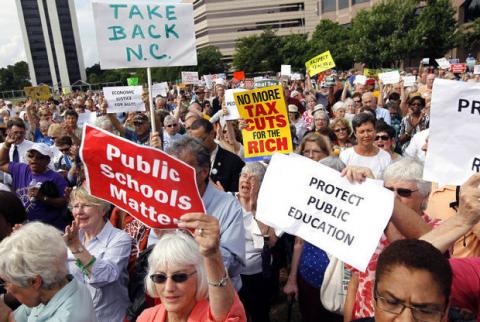 Protestors cheer at Halifax Mall in support of "Moral Mondays" protests at the General Assembly in Raleigh on June 3, 2013., Chris Seward

Doubling the number of people arrested overall in a single day, 151 people were arrested at this week's 'Moral Monday' protest as they tried to enter the Senate chamber at the state house in Raleigh, North Carolina.

Yesterday's protest, according to local outlet WRAL, was the largest demonstration yet since the state chapter of the NAACP and other civil rights groups began protesting "GOP policies on social programs, education, criminal justice and taxes" more than five weeks ago. Smaller groups of people had been arrested at previous actions, but each time the number grows as more people attend and the group's energy increases.

"The people are awake now, and we have decided to stand up," state NAACP chapter president Rev. William Barber told the crowd Monday. "We are a movement. This is not a moment."

Welcoming the comparison of the populist energy in North Carolina to that witnessed previously in Wisconsin in 2011, Barber said there were also differences. "This ain’t Wisconsin,” he told the crowd. “This is the South, where justice was hammered out.”

This video released by the coalition articulates their grievances in North Carolina as it seeks to capture the energy feeding the movement.

This slideshow used the recorded words from Monday's rally along with images of those gathered.

The civil disobedience action by the more than 150 people arrested was a planned event and the Raleigh News & Observer recounts just one woman's story about why she participated:

Jennifer Ferrell stopped so her husband could take her picture. Then she waved goodbye to her 3-year-old twins and marched into the Legislative Building to get handcuffed.

“I’m excited. I’m not nervous,” the 34-year-old Raleigh resident said as she walked in a line of demonstrators. “I’m passionate. I’m not crazy.”

For weeks now, Ferrell heard about protesters getting arrested at the statehouse to demonstrate against the Republican majority’s legislative agenda. And like many Monday, she felt compelled to add her voice to the chants and her wrists to the handcuffs. “I knew it was time to stop watching and do it myself,” she said.

Later, as those place under arrest after their attempt to enter the chamber were led away by police, the gathered crowd of hundreds cheered them as they passed to busses waiting to take them to jail for processing.

This work is licensed under a Creative Commons Attribution-Share Alike 3.0 License
.