As the war on terror becomes a war on our privacy, Salon's former CEO launches project to encourage whistle-blowers 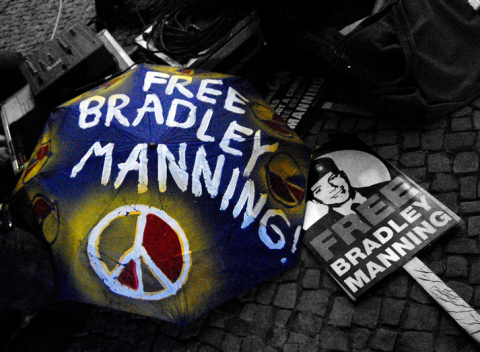 “It’s coming from the feel
that this ain’t exactly real,
or it’s real, but it ain’t exactly there.
From the wars against disorder,
from the sirens night and day,
from the fires of the homeless,
from the ashes of the gay:
Democracy is coming to the U.S.A.”
– Leonard Cohen

A specter is haunting America – the specter of freedom. After 12 years of being surveilled, harassed and terrorized by our government and corporate overlords, the public seems increasingly fed up. The backlash ignited by the Justice Department’s crackdown on the press and by the politicization of the IRS is a turning point. The public push-back against creeping Big Brotherism is coming from all directions, from the left and right. This week as Bradley Manning – the heroic young whistle-blower who has become the face of the new defiance – went on trial for alleged national security crimes that could result in a life sentence, thousands of people all over the world rallied in his defense. More than 20,000 people have contributed a total of $1.25 million to Manning’s legal battle.

There is a growing sense that this is a critical moment for American democracy. A national security state engorged by war-on-terror spending has encroached so deeply on our civil liberties that unless we fight back now, those cherished freedoms might be lost forever.

President Obama came into office on a cloud of lofty rhetoric about the free flow of information. “My administration is committed to creating an unprecedented level of openness in government,” he declared on Jan. 21, 2009, the day after being sworn in. “We will work together to ensure the public trust and establish a system of transparency, public participation, and collaboration.” Those words now have a hollow ring. Under Obama, the government has sharply escalated its prosecution of security leaks and has blocked more Freedom of Information requests than it did under George W. Bush.

Unfortunately, the big press watchdogs that the public counts on to expose government wrongdoing have been slow to bark. When Army Pfc. Manning approached the New York Times and Washington Post with his huge military cache documenting U.S. war crimes in Iraq and Afghanistan, the newspapers were uninterested. It took the brave enterprise of Julian Assange and his WikiLeaks team to turn Manning’s raw material into news gold. And yet, even after profiting from Assange’s risk-taking, the New York Times later blithely threw him to the sharks. Former New York Times executive editor Bill Keller, who partnered with Assange on distribution of the WikiLeak documents, has since made a habit of disparaging him in public. The new Alex Gibney documentary on WikiLeaks, “We Steal Secrets,” shows one of Keller’s editorial minions gleefully ridiculing Assange – who has been forced into a vagabond life to stay one step ahead of his government pursuers – for his poor hygiene and wardrobe.

But many journalists in the independent press feel a sense of solidarity with Bradley Manning and WikiLeaks. That’s why I’m joining with a group of dedicated editors and reporters from my days at Salon and Mother Jones magazine to start a new investigative media project that we’re calling Open America.

Inspired by the courage of Manning, Open America will encourage other whistle-blowers to reach out to us from behind the closed doors of power. We aim to “open-source” our democracy, revealing vital information that belongs to the public. Open America will publish its exposés in partnership with a wide variety of independent media platforms, including Salon and AlterNet.

We understand that our country has legitimate national security concerns that must be respected. But in today’s political climate, far too much information is hidden from view – not because its disclosure would threaten public safety, but because it would expose high crimes and malfeasance.

As journalist Chris Hedges has observed, we are witnessing “the terrifying metamorphosis of the ‘war on terror’ into a wider war on civil liberties. It has become a hunt not for actual terrorists, but a hunt for all those with the ability to expose the mounting crimes of the power elite.”

It’s not just Manning and Assange who have felt the full force of the secrecy state, it’s anyone who has given aid and comfort to the cause of open government. Hackers and journalists with connections to groups like Anonymous and WikiLeaks have been subjected to FBI harassment, airport detention, and arrests. Meanwhile, government agencies and the military have taken extraordinary steps to snoop on their personnel, out of mortal fear that other Bradley Mannings lurk in their midst.

The all-seeing Eye of Sauron is located not just in Washington, but in Silicon Valley. Digital corporate giants like Google and Facebook – which have grown fat and prosperous off their mantra that “information wants to be free” – are now arms of the new surveillance state. As Eric Schmidt, the company’s executive chairman, has smugly declared,  “We know where you are. We know where you’ve been. We can more or less know what you’re thinking about.” When federal prosecutors came to Google in search of account information on WikiLeaks, the company that promises to do no evil quickly turned it over to the government. (On the other hand, Twitter, to its credit, resisted the secret government subpoenas, fighting to make them public.) Google is quickly becoming the Biggest Brother of them all.

Schmidt’s new book, “The New Digital Age” — which he co-wrote with “Google Ideas” czar (whatever that is) Jared Cohen, a youthful product of the national security state – is a disturbing vision of our future, where all human information resides in the Cloud under the benevolent supervision of the digital elite. Schmidt and Cohen view Google as a soft war partner in the global crusade against terrorism, one more effective than drones. In fact, they write, Silicon Valley companies might be even more effective than government when it comes to fighting terror: “This is the industry that produces video games, social networks and mobile phones – it has perhaps the best understanding of how to distract young people of any sector, and kids are the very demographic being recruited by terror groups.” It’s jaw-dropping banalities like this about Google’s ability to solve the world’s problems that provoked Assange to call the book “a startlingly clear and provocative call for technocratic imperialism from two of its leading witch doctors.”

Elites like Henry Kissinger, Bill Clinton and Tony Blair have rushed to praise the Google manifesto. But more and more of us are questioning the wisdom of our betters these days, whether they reside in Washington or Silicon Valley. We know that the only way to keep power honest and accountable is to keep its operations visible.

When Bradley Manning, a young soldier blessed – or damned — with a soul, saw in grisly detail what the U.S. killing machine was doing in hidden corners of the empire, he knew he had to act. “I just couldn’t let these things stay inside of the system & inside my head,” he told the email confidant who later turned him in. “I’m just weird I guess. I … care.”

It’s time for all of us to get weird.

David Talbot is the founder and former editor-in-chief of Salon, and the project director of Open America. You can contribute to the Bradley Manning legal defense fund here. And you can donate to the Open America campaign by going to its Indiegogo page.