The Sword Drops on Food Stamps

Congress is about to slash food stamp funding in the midst of a deep economic recession, when more people rely on food stamps than ever before. The only hope now to at least moderate the cuts is a band of House Democrats who have pledged to fight the food stamp cuts ferociously. 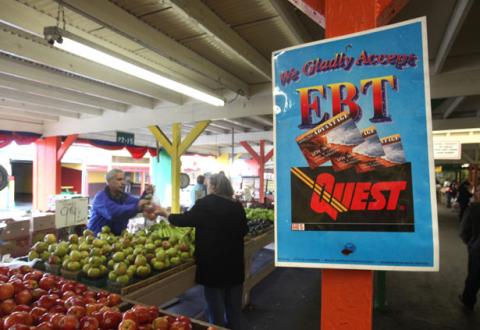 It’s official: Congress will slash food stamp funding in the midst of a deep economic recession, when more people rely on food stamps than ever before.

Monday night, the Senate passed a five-year farm bill that contained $4.1 billion in cuts to the Supplemental Nutrition Assistance Program (SNAP) over ten years. This ensures that the only debate now will be about how much to cut—and it’s likely to result in cuts much deeper than $4.1 billion.

The House Agriculture Committee passed a farm bill last month that cut $20.5 billion from SNAP by removing “categorical eligibility” (more on that here), which would take food stamps away from 2 million Americans and hundreds of thousands of children.

That bill has yet to be fully debated and passed on the House floor, and the push to make the cuts even deeper will be strong—conservatives have insisted on even deeper cuts. Representative Paul Ryan’s 2013 budget, for example, called for $135 billion in food stamp cuts, and on Tuesday, twenty-five House Republicans wrote to House Speaker John Boehner to remove food stamp funding from the bill altogether. (They just want the program debated on a separate track, but the barely implicit message in the letter is that they don’t want to be forced to agree to “only” $20.5 billion in food stamp cuts at the risk of killing the farm bill.)

The House bill, once passed, will head to conference committee, and the negotiators will have to reach a consensus number. Without question, it won’t be lower than $4.1 billion.

Why did Democrats in the Senate head down this road? Some attempted not to—Senator Kirsten Gillibrand introduced a bill last month that blocked any food stamp cuts, but only twenty-five of her colleagues, and zero Republicans, voted for it. It failed 70-26.

Senator Debbie Stabenow, chair of the Senate Agriculture committee, has defended the cuts as designed only to stop “waste, fraud and abuse” in the SNAP program, and urged Democrats to vote against Gillibrand’s bill. “Every family that currently qualifies for nutrition assistance in this country continues to get that assistance,” she said. “We do make sure there is integrity in the programs.”

That’s not really what the bill does, however. It cuts $4.1 billion by eliminating the “Heat and Eat” programs adopted by several states that coordinate low-income heating assistance with SNAP benefits, thus allowing a slightly larger benefit. The Coalition on Human Needs explains:

Fifteen states and the District of Columbia have opted to provide SNAP households with a nominal [Low Income Heating Assistance Program] payment, so that instead of having to provide burdensome monthly documentation of their shelter and heating/utility bills, they can deduct a standard allowance from their income, thereby increasing the amount of SNAP benefits they qualify for. This “Heat and Eat” approach disproportionately helps seniors and those with disabilities, who pay a high proportion of their income on shelter costs. Without this coordinated approach, such households may lose $50—$75 a month in SNAP benefits.

Aside from being, well, cruel, the food stamp cuts in the Senate bill are also damaging to the economy. The Center for American Progress, in a study released in March, found that for every $1 billion cut from SNAP, 13,718 jobs are lost:

So the Senate bill, by that calculation, will cost 56,243 jobs. CAP noted the losses “will likely have the greatest impact on younger workers, since they account for a disproportionate share of workers in food-related industries.”
The only hope now to at least moderate the cuts is a band of House Democrats who have pledged to fight the food stamp cuts ferociously, as we reported last month.

Support The Nation's journalism. Get a digital subscription for just $9.50!