At present the polls wobble between six and nine percent for The Left. Yet if ardent speeches like those three, with no punches pulled, can be followed by an equally vigorous election campaign, that two digit goal, though by no means easy, may not be unattainable. 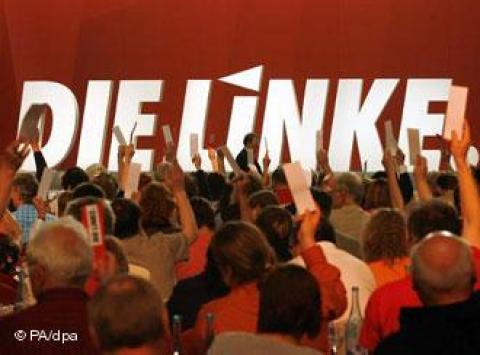 The Left party is a new political force in Germany,

Two elements had threatened the party congress of The Left in Dresden over the weekend. One was water; the river Elbe, whose floodwaters reached almost to the terrace just outside the congress hall. As co-president Katja Kipping reported: “Two weeks ago we didn’t know if we could get to this meeting without rubber dinghies!”

The other menacing element, luckily figuratively, was fire. The media, true to form, had sought any spark of conflict lying around, hoping it could be ignited as at the congress a year ago, when an angry conflagration was barely extinguished at the last minute. What did they find? Oskar Lafontaine, long a major stalwart of the unified East-West party – he comes from western Saarland – had called for an end to the euro, which he saw as a burden blocking any healing of Europe’s economic crisis. His proposal brought no applause from others in the party, and no media bellows – or bellowing - could nurture this fire, which ended like that third fabled element air - hot air. For somehow old Oskar, now 69, had lost much of his wonderful charisma and political weight and did not even speak at all.

But others did! And what speeches they were! With real fire! Two were on TV, and it was hard to stay seated on the couch. After months, indeed years, when members or friends watched unhappily as one wing of The Left flapped against the other, losing more and more ground in the political landscape, taking one beating after another, this weekend the wings joined to fly upwards. There were fifteen surely weary hours of debate (not on TV), but a great paucity of sharp jibes, angry huddles or hard battle lines. And finally the 550 delegates, with a only few abstentions and five lonely “No” votes, approved an election program. More importantly, the election campaign for September 22nd was launched in earnest with the three notable speeches.

All of them challenged icy statements by the two other opposition parties, the Social Democrats and the Greens, that they would not accept even limited support by The Left in forming a government; they would rather join Merkel’s right-wing CDU or even the Free Democrats (FDP). The Left speakers reversed the matter; in order to achieve any agreement it was up to the Social Democrats and Greens to change positions which – despite left-sounding electioneering slogans – have become almost indistinguishable from those of the two ruling parties.

Co-President Berndt Riexinger, previously a militant West German union leader, started with the day’s news. “Evidently a new reason for war in Syria is being dredged up. We saw that ten years ago when alleged chemical weapons were used to justify a war. That gives me every reason to say: Hands off Syria! No military involvement, no intervention! Our message is clear: Peace. The federal government must support all initiatives for a multilateral peaceful solution. All participants must sit down at one table. And all of the Patriot rocket launchers must be removed from the region.”

Riexinger also urged close ties with union members – not stressed enough by the Left in the past: “As a union man I say that no path can dodge the issue of decreasing working hours…It was a blunder for the unions to brush this important project aside. It’s an impossible situation when some people work much too hard, get burned out and break under constant stress while others have no work or are pushed into mini-jobs…

"For Angela Merkel things are simple. She has stated very clearly: there should be no tax increases for the wealthy, no, not with her. She has made the decision. Sharp and clear. Her camp is that of the upper ten percent of the population.”

Riexinger attacked Merkel’s frequent boast that Germany has been able to beat out the economic storm. “For millions that is not the case. They have not nicely weathered the crisis. Ten million people have to work in the low wage sector. More than four million earn less than 7 euros an hour before taxes. One and a half million don’t even make 5 euros… Many of these are in the retail field, where employers have annulled all contracts. They want to blackmail the union… The owners of the top discount retail nets, all on the list of the ten wealthiest Germans, want to pauperize their employees. But these – mostly militant women – are fighting back. And our place is on the side of those who walk out to fight such policies. Also those in Madrid, in Athens and especially these days on Taksim Square in Turkey. The Left is the party of international solidarity.”

The other co-president, Katja Kipping, comes from Dresden: “I’m glad the congress is here, this is my election district. My daughter’s favorite swing is on a playground near here. Dresden is a beautiful city but, admittedly, it has a conservative reputation, the CDU is strong here. I can assure you however that we are working to change that. Things are happening.” And she told of the initiative of The Left in a successful referendum campaign to prevent city hospitals from being privatized.

She voiced the sympathy of the congress for the many thousands who have suffered disastrously in recent weeks. “When we speak about the flood, we must of course speak about quick assistance, but also about how such destruction can be prevented in future…”

She, too, took a swipe at Angela Merkel’s European economic policy and its implicit blame on allegedly wasteful or spoiled people in the southern countries. “The Black-Yellow government (in common political shorthand the color of the CDU is black, that of its partner FDP is yellow) tries to convince us that we are being forced to pay for the debts of the Greeks, the Spanish and the others. But we know that there is no conflict between the different nationalities, the conflict is always between those on top and those down below, and a nurse in Athens, who works under very difficult conditions, gets to see nothing at all from these rescue packages.”

She also examined the position of the Green party. “The Greens were once part of the peace movement. Today they are very eager when it comes to making war. We get constant new surprises. When Foreign Minister Westerwelle acted sensibly during the Libyan conflict, the Greens demanded instead that we join in the battle. With such a switch by this party from green to olive drab green we can really be glad that none of them were foreign minister...”

Kipping’s activities had not been limited to words. Those at the congress were proud that the party co-president, with several Bundestag members, had been in the middle of the recent “Blockupy the banks” parade in Frankfurt/Min – and tried vainly to prevent the very brutal police violence. She mentioned the event in her speech: “Blockupy 2013 is not only a story of police repression but also of solidarity. The police wanted to split up the demonstration but all participants remained united, from the group opposed to air flight noise to the feminist caremob, from attac to those of us from The Left, from members of the Metal Workers Union to the anarchists – we all stuck together. Yes, the Blockupy demonstration showed the mosaic character of the left, its multiplicity in breadth and variety. We too were part of this. And our joy about this togetherness cannot be destroyed by any police attack in the world – not by any pepper spray…”

In the last of this trio of three keynote speeches, Gregor Gysi, leading founder of the party, head of The Left caucus in the Bundestag and a popular speaker well outside the ranks of his party, took a look at some still very controversial questions involving past and future:

“State socialism foundered, but that does not mean that the GDR had no achievements. I need only mention the chances for women to work and to qualify for better jobs, the child care, education, where there were unfortunately political limitations but never any financial ones, the all-round medical polyclinics, the chance to get both a college preparatory diploma and full apprenticeship training. And I find that we should learn at last to point to these with self-confidence and without always creeping away from the matter…

“Why have I remained a socialist? Because capitalism causes wars, it lives from wars, and will continue to do so as long as profits can be made from wars. Economic interests are basic to every war. I oppose this and that is why I want a democratic socialism. And because capitalism does not establish social justice, it always tends instead to concentrate wealth in a few hands and spread poverty. Because capitalism cannot establish ecological sustainability and because, of the 70 million who die on our earth every year, 18 million die of hunger. Even though world agriculture is capable of feeding the population twice over, 18 million die of hunger. Why isn’t capitalism even able to feed the world population - I cannot understand this. And that is why we want to transform society and achieve a democratic socialism…”

Turning to election issues, Gysi pointed out how important opposition from The Left had been: “We placed the question of an all-inclusive legal minimum wage on the agenda of the republic. It was we who pushed themes like justice in taxation. We are neither a tax-raising party nor a tax-cutting party. We are a party of tax justice...We put the subjects of controlling rent, of holding down electricity costs, of universal health insurance, of combatting old age poverty, of withdrawing troops from Afghanistan – we put all of them on the agenda, and wherever you look, you see how we forced the others into motion and to copy our proposals. We shouldn’t complain about that, it was a success if the others were forced to copy from us - and we must now keep pushing, that is our task…

“The stronger The Left becomes the greater chance we have to turn majorities in the thinking of the population into political majorities and then go on to fight for further demands. That holds true for the fight against any military involvement of the armed forces, against poverty in old age, against the pressures of the Hartz-4 Law on the jobless and on precarious jobbing, on a minimum wage law, justice in taxation, medical insurance, equal pay and equal pensions for men and women in East and West.”

Gysi listed 20 major demands on the election platform and set, as a goal for September 22nd, a result in the two digit range. Four years ago the amazing success of The Left in winning nearly 12 percent gave the others a great shock; they have been trying hard to reverse the trend ever since.  At present the polls wobble between six and nine percent for The Left. The politicians of the four established parties and their media will do everything to keep people from learning of this program and may even resort once again to that fourth element of Greek tradition – earth, or in political terms, dirt. Yet if ardent speeches like those three, with no punches pulled, can be followed by an equally vigorous election campaign, that two digit goal, though by no means easy, may not be unattainable.