The cumulative effect of Convicting the Innocent is stunning. Almost all of the 250 DNA exonerations occurred in murder or rape cases. Murder and rape amounts to less than 1% of all felony convictions. The errors typically flowed not from malicious motives but from the normal cognitive biases that lead detectives and prosecutors to be convinced that they have the right person. The result must be thousands of erroneous guilty pleas and trial convictions each year. 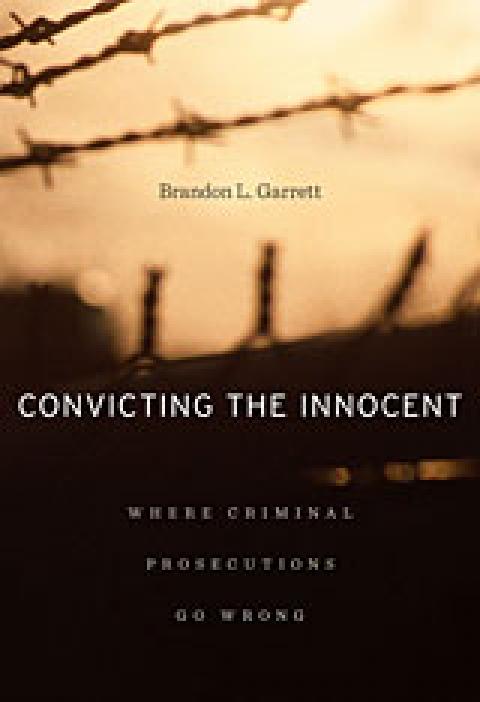 Convicting the Innocent: Where Criminal Prosecutions Go Wrong is one of only three or four books that provide readers with an overview of the entire wrongful conviction problem in the United States. Two are more than a decade old, and one focuses on how the problem was studied by a citizen’s commission in one state. That would seem to make Convicting the Innocent a book to read by default if you want to understand how false convictions happen. Even if there were more competition, Convicting the Innocent would stand out as a highly readable and important study. The subtitle hits the bull’s-eye. This book makes it clear just how wrongful convictions occur. It opens a window on the problem by examining 250 cases where there is virtually no doubt that entirely innocent people spent decades in prison for serious crimes they did not commit.

There is no doubt about the innocence of Jeff Descovik, Ronald Jones, Habib Abdal, Gary Dotson, David Gary, Earl Washington, Jr., Kennedy Brewer, Frank Lee Smith, Ronald Cotton, Darryl Hunt—and 240 additional cases that inform Garrett’s book—because they were officially exonerated when their DNA profiles absolutely did not match DNA evidence related to the crime. Other facts confirm that the exonerees were not involved. In almost half of the cases, the “other facts” included linking DNA profiles to the actual killer or rapist.

Brandon Garrett, a professor at the University of Virginia Law School, has worked closely with the Innocence Project and has published law journal articles on pieces of the wrongful conviction puzzle. He has drawn on his unparalleled knowledge of these cases to provide an information-packed and often eye-opening account of what went wrong. Along the way he lists simple statistics (counts and percentages) that help one understand the proportionate size of the issue at hand. The big question he asks is: Do the relatively few wrongful convictions described in the book reflect systematic failures that run through every state and local criminal justice system?

If the answer to this question is “yes,” then we have to conclude that the DNA exoneration cases are, as the Introduction suggests, the tip of an iceberg. Garrett’s analysis of the cases is always temperate and thorough. He carefully reviews errors and tries to think beyond the surface facts to ask what may have been going on in the minds and actions of criminal justice personnel to produce such soul-numbing injustice. A fair reading of his work leads to a sober conclusion that the wrongful conviction iceberg is very big, even if we don’t know precisely how many of the one-million people convicted of felonies each year are actually innocent. This conclusion flows mainly from the growing realization that most wrongful convictions are not caused by evil acts but by everyday decisions made in a flawed process based on outdated or erroneous thinking.

In nine chapters Convicting the Innocent explores the main reasons why false convictions occur, derived from 250 DNA exonerations. A list of criminal justice system reforms rounds out the book. These reforms would most likely not only reduce wrongful convictions, but make the investigation and prosecution of crime more accurate and efficient in convicting the guilty. The seven problem areas include contaminated confessions, eyewitness misidentification, flawed forensic evidence, “trial by liar,” and two chapters about all that can go wrong in the trial and appellate courts.

Each chapter begins with a description of a single case. What becomes clear is that each case is infected with multiple sources of error. The cases selected to lead off each chapter focus on one primary reason why an innocent man (only four exonerees were women) went to prison. The chapter on “flawed forensics,” for example, describes the false confession of Gary Dotson, the first DNA exoneree in the United States. The lead-off error was a false accusation of rape by a teen-age girl who feared the stigma of having sex with her boyfriend. Her false claim spun out of control when she picked Dotson out of a police mug book. Good forensics would have exposed her lie and kept Dotson out of prison. The forensic examiner first used the wildly unreliable method of microscopic hair comparison to testify that several pubic hairs in the rape kit were consistent with Dotson. Next, the examiner performed the reliable ABO serology test. He testified that the presence of Type B blood type in the seminal fluid meant that the sex partner (or rapist) expressed Type B antigens. Dotson had Type B blood, a type shared by 11% of Caucasian Americans. However, he failed to testify that the woman also had Type B blood. The seminal fluid was mixed with a much larger quantity of substance from the female, and in such cases the material from the victim would overwhelm or “mask” any material from the semen. Given the methodology available in 1979, the serology test was useless—the rape or sex act could have been committed by any man in the world. Even worse, he testified that Type A material found on stains on the victim’s underwear could have been caused by an impurity like dust, a sheer fabrication. Years later, when the woman recanted, a DNA test found that the stains matched the DNA of her boyfriend, with whom she was having consensual sex.

The chapter goes on to describe the various unreliable forensic techniques that have been exposed by DNA testing. It is unnerving to realize that invalid or flawed forensic science (microscopic hair, bite mark, shoe print, and voice comparisons) has been related to a large percentage of false convictions. Even the somewhat more accurate comparison method of fingerprinting has inaccurately identified an innocent man, and several men were convicted by erroneous DNA tests performed by incompetent examiners in substandard laboratories. Even when the tests were performed properly, in 61% of the cases analysts improperly testified for the prosecution (most worked in police-run labs), reaching invalid conclusions and overstating the evidence. Moreover, defense lawyers rarely challenged these errors and did not bring in their own experts. Judges failed to check the errors, either at the trial or appellate level.

The cumulative effect of Convicting the Innocent is stunning. Almost all of the 250 DNA exonerations occurred in murder or rape cases. Murder and rape amounts to less than 1% of all felony convictions. Garrett’s patient, clear-headed, and fair reading of the lengthy transcripts and case materials leaves the reader with a good idea of what went wrong. The cases were studded with flawed procedures involving snitches, interrogations, lineups, trials and plea bargains. It is likely that the same errors occur in thousands or more robbery, burglary, theft, and drug convictions. The errors typically flowed not from malicious motives but from the normal cognitive biases that lead detectives and prosecutors to be convinced that they have the right person. The result must be thousands of erroneous guilty pleas and trial convictions each year.

It took years for the cumbersome appellate process to free innocent prisoners with long sentences who were lucky enough to have the assistance of dedicated family, friends, and innocence projects. This must mean that many of the innocent-convicted either take their probation or short prison sentences or “lump-it,” and that others will remain in prison (or on death row), perhaps for life, knowing that the American justice system handed them the cruelest injustice.

The last chapter on “reforming the criminal justice system” shows that the innocence movement has begun to generate reforms in the many problem-areas leading to wrongful convictions. Given the size and the extreme fragmentation of America’s criminal justice system, however, Convicting the Innocent shows that reforms have only begun to nibble away at a very large problem. The book makes it clear that the legal and adversary system alone cannot fix the problems.

Changes in police and prosecutorial systems require organizational changes and rethinking their cultures of winning, often at any price. The woefully underfunded system of funding lawyers for indigent defendants requires smart fiscal thinking; more money for defense up-front will save far more dollars later spent on prison cells. As money for defense often comes from county coffers, and prisons are funded by state taxes, solutions have to occur at the political level. If the courts cannot solve these problems with rulings about constitutional rights (despite a near absolute right to counsel, under-funding has made a mockery of that right in many places), then the solutions must come from the greatest American political ideal: an informed and right-minded electorate demanding workable and practical solutions.

A reader who wants to explore the facts further is directed (in footnotes to the Appendix) to the Innocence Project Home page (http://www.innocenceproject.org) and copies of the documents and transcripts that Prof. Garrett utilized (http://www.law.virginia.edu/innocence).