While the TPP is in many ways like NAFTA and other existing trade agreements, it appears that the corporations have learned from previous experience. They are carefully crafting the TPP to insure that citizens of the involved countries have no control over food safety, what they will be eating, where it is grown, the conditions under which food is grown and the use of herbicides and pesticides. 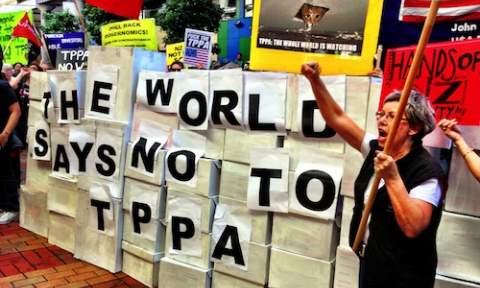 Something is looming in the shadows that could help erode our basic rights and contaminate our food.  The Trans Pacific Partnership (TPP) has the potential to become the biggest regional Free Trade Agreement in history, both in economic size and the ability to quietly add more countries in addition to those originally included.  As of 2011 its 11 countries accounted for 30 percent of the world's agricultural exports.  Those countries are the US, Australia, Brunei, Chile, Canada, Malaysia, Mexico, New Zealand, Peru, Singapore and Viet Nam.  Recently, Japan has joined the negotiations.

Six hundred US corporate advisors have had input into the TPP.  The draft text has not been made available to the public, press or policy makers.  The level of secrecy around this agreement is unparalleled.  The majority of Congress is being kept in the dark while representatives of US corporations are being consulted and privy to the details.

The chief agricultural negotiator for the US is the former Monsanto lobbyist, Islam Siddique.  If ratified the TPP would impose punishing regulations that give multinational corporations unprecedented right to demand taxpayer compensation for policies that corporations deem a barrier to their profits.

Help us speak truth to power. Donate what you can afford to support NationofChange. There appears not to be a specific agricultural chapter in the TPP. Instead, rules affecting food systems and food safety are woven throughout the text.  This agreement is attempting to establish corporations' rights to skirt domestic courts and laws and sue governments directly with taxpayers paying compensation and fines directly from the treasury.

Though TPP content remains hidden, here are some things we do know:

Members of Congress are concerned that the TPP would open the door to imports without resolving questions around food safety or environmental impacts on its production.

Procurement rules specifically forbid discrimination based on the quality of production. This means that public programs that favor the use of sustainably produced local foods in school lunch programs could be prohibited.

The labeling of foods containing GMOs (Genetically Modified Organisms) will not be allowed.  Japan currently has labeling laws for GMOs in food.  Under the TPP Japan would no longer be able to label GMOs.  This situation is the same for New Zealand and Australia.  In the US we are just beginning to see some progress towards labeling GMOs.  Under the TPP GMO labels for US food would not be allowed.

In April 2013, Peru placed a 10-year moratorium on GMO foods and plants.  This prohibits the import, production and use of GMOs in foods and GMO plants and is aimed at safeguarding Peru's agricultural diversity. The hope is to prevent cross-pollination with non-GMO crops and to ban GMO crops like Bt corn.  What will become of Peru's moratorium if the TPP is passed?

There is a growing resistance to Monsanto's agricultural plans in Vietnam.  Monsanto (the US corporation controlling an estimated 90% of the world seed genetics) has a dark history with Vietnam.  Many believe that Monsanto has no right to do business in a country where Monsanto's product Agent Orange is estimated to have killed 400,000 Vietnamese, deformed another 500,000 and stricken another 2 million with various diseases.

Legacies of other trade agreements that serve as a warning about the TPP have a history of displacing small farmers and destroying local food economies.  Ten years following the passage of NAFTA (North American Free Trade Agreement) 1.5 million Mexican farmers became bankrupt because they could not compete with the highly subsidized US corn entering the Mexican market.

In the same 10 years Mexico went from a country virtually producing all of its own corn to a country that now imports at least half of this food staple. Mexican consumers are now paying higher prices for Monsanto's GMO corn.

With little or no competition for large corporations Monsanto, DuPont and Syngenta now control 57 percent of the commercial food market.

While the TPP is in many ways like NAFTA and other existing trade agreements, it appears that the corporations have learned from previous experience. They are carefully crafting the TPP to insure that citizens of the involved countries have no control over food safety, what they will be eating, where it is grown, the conditions under which food is grown and the use of herbicides and pesticides.

If the TPP is adopted the door will be open wider for human rights and environmental abuse.  Some of the things we should expect to see include:

more large scale farming and more monocultures; destruction of local economies; no input into how our food is grown or what we will be eating; more deforestation; increased use of herbicides and pesticides; increased patenting of life forms; more GMO plants and foods; and no labeling of GMOs in food.

Together these are a step backwards for human rights and a giant step towards Monsanto's control of our food.

Please pass the word to others about the TPP as most Americans are unaware of this trade agreement or its ominous effects if passed.