Inequality.is Makes Plain What Inequality Is

On the website launched by the Economic Policy Institute, you can learn how income is actually distributed in the U.S. among the top 10 percent and the bottom 90 percent, see how your specific characteristics determine your wage, and see how it can be that regular workers are working more today but not reaping the rewards. 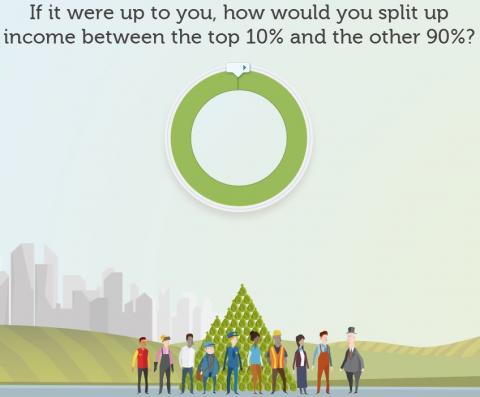 The Economic Policy Institute has launched a new website, Inequality.is, where users can take part in an interactive experience that educates them on how economic inequality is real, created, and expensive.

In a press call today representatives from EPI spoke further about the importance of this website.

Former Secretary of Labor Robert Reich stressed that educating people on rising economic inequality is important because a strong middle class is the basis for a functioning economy. As middle-class people see their incomes fall, they spend less on goods and services and the incentive for companies to create jobs vanishes with dropping demand.

Economic inequality can also be seen as a terrible problem for democracy, as wealth and income becomes more concentrated it gets easier for a small number of people to control government through spending on politics and candidates.

“There are solutions. This is not economic determinism,” Reich insisted, adding that even though we are the most unequal of all rich nations there are ways to fix this, starting with making people more aware of why we are in this situation in the first place. And they can learn that at http://inequality.is/real.

EPI President Lawrence Mishel noted that sustainable economic growth needs to be based on broad-based consumption, which comes from a strong middle class. The Commerce Department released revised gross domestic product growth rates this week that showed the economy only grew 1.8 percent in the first quarter of this year. Having income concentrated among the top 1 percent of the population is not the way to recovery.

On the website you can learn how income is actually distributed in the U.S. among the top 10 percent and the bottom 90 percent, see how your specific characteristics determine your wage, and see how it can be that regular workers are working more today but not reaping the rewards.

EPI economist Elise Gould rounded out the discussion by stating that “those that argue inequality is OK, because there is equality of opportunity, are flat out wrong.”

See this for yourself at http://inequality.is/real and learn how your personal income has been affected by growing inequality in the United States.